The story of the game im working on, but any ideas feel free and if i like them you will be given credit or perhaps given co writer to the game. The feel of the game im going for is a Metal gear 1/Splinter cell
/rouge spear type game.

Take a look at a video below of how the game is coming along and yes i am still in PREALPHA stage.

Please tell me what you would like too see in the game below, cheers for reading and i will keep you
posted.

Looks like a cool start didn’t expect that cool ninja like movement at 0:38,only thing is that you might want to allow the player to jump even more higher since it makes it more realistic(looks like the enemy is easily able to see him with the current jump)

From what I see the game can be played in multiple ways :

Players are able to perform various types of agile skills like that wall running to get past enemies or traps set in the levels,be able to take enemies as hostages or use them as shields to protect yourself.

Being able to shoot lights or be able to disable lights with a remote ,this gives the option to the player to shoot and break the light which will cause the enemy to stay on alert (but they wont be able to see you ) .
Your mask will allow you to see in the dark when wearing it.

Being able to use the environment as weapons:

This means that you are able to hit or bang on doors ,this will send a sound radius ,in which if any near by enemy hears the sound will go into alert mode ,which will cause the enemy to move towards the noise,this allows the players to hide and sneak or attack the enemy from the side or behind.

Do you plan to only have weapons or also hand combat ?
Apart from that it looks pretty great, gook luck

Thank you for pointing that out, i have now made the splits higher. Yes thats what im going to be working on soon
is grabbing a NPC, i think the way i can do it is make new state once i have collided behind enemy and press E.
Once grabbing and set state the NPC will parent to mt character allowing complete movement of him.

I will need a alarm system. Well a alert system, but i have no idea where to start however it will be needed

This game, it looks awesome, awesome and once more - awesome. You’re the maestro of animatio:D

Yeah! The animations look very good! Is it all keyframe animated? You have a lot of talent! Keep going.

Well I’ve told you before but I have to say it again, I love your animations

So smooth and life-like

I will add aiming tonight, just hit me up.
(I got caught up with 3d side scroll and a little done for rpg project last night)

I like how fluid everything is, and now I know a very very effective way to swap from aiming fluidly using IK, (just figured it out with the side scroller game)

ChaosEmergency, before you post your latest video here, I’ve got a note for you about it:)

The fact is that the guy would notice him up there. He must use covers on ceiling. Maybe add a pipe which the player can blend with? Something like this,

, but thicker one. Do that player can hide his legs behind it:)

Thanks for kind words and i will keep you guys posted. Yes most of them are keyframed and i use a lot of reference from
mocap. Here is a new video, i`m currently working on grab NPC as hostage.
BPR i will send you the character file.
I know he is visible but will darken the area more and turn light off.

ChaosEmergency, before you post your latest video here, I’ve got a note for you about it:)

Noted i will get on that.

I like the concept! Very good animations, keep up good work!

Hey, good work! so far as that wall jump goes, you’ve come a long way, but you’re not there yet. maybe if he pressed his back to the ceiling he could get high enough where it doesn’t seem like the guard is going to whack his head. (that would be awkward). I’m probably not describing how he should be correctly, so i drew a reallly quick pic: 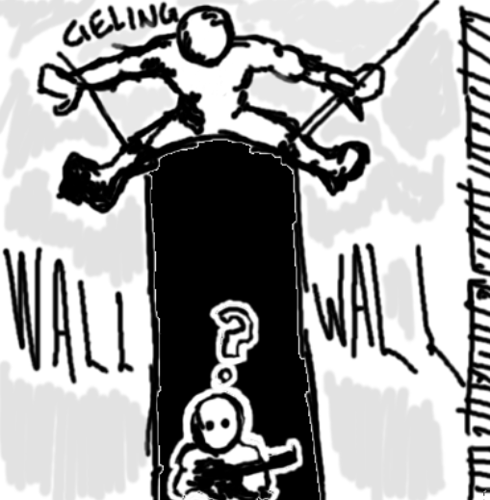 It won’t work as well with his gun out, because the hands are involved, but it will look alot more believable.

Woah great pic. Yeah i was going for that, but i wanted a more splinter cell style.
If it`s bright the NPC will see him, but if its dark they wont.
So really the move is only used in dark situations.

Can you stop his hands from penetrating the walls and other objects?

Can you stop his hands from penetrating the walls and other objects?

Yes stay posted with new update. I have extended player box area and much more.

Climbing is in, i don`t know what is causing the video lag but yeah 60fps.

UPDATE
Third person camera in, still some kinks to be worked out, but it`s in.
Firing animation coming soon and pistol.

Looking really good! Excellent animations, Awesome texturing. Looks like the start of an amazing game. Keep it up.

Looks good, but currently such unoptimised. So high shadow resolution, so high-res textures. But about textures - you adapt their scale to desired as last thing. Because you should create max quality first, than you can either scale them down or generate a duplicate and create graphic settings.

This game looks good! There’s not very easy to create a great edge climbing system, but it seems like you’re on the right track. Reminds me a lot of Splinter Cell.

Looks good, but currently such unoptimised. So high shadow resolution, so high-res textures. But about textures - you adapt their scale to desired as last thing. Because you should create max quality first, than you can either scale them down or generate a duplicate and create graphic settings.

I wouldn’t say it’s necessary bad optimized just because there’s high-res shadows and textures. There’s so many ways to optimize a game without having to make the graphic suffer such as occlude, optimize the dynamics by choosing “No collision” or “Box” instead of the mesh that the game calculates by default. If your doing a game where you think the shadows matters a lot (for example a stealth game), I would say that keep them at the resolution you aim to have in the game at start, than you can see that other things you could be optimizing.

And as a note ChaosEmergency stated earlier that this game runs at 60 fps at his computer. I think it’s important that we keep pushing the engine instead of letting it push us down.