I tried finding a solid tutorial about using cycles to make puddles…most involve using Internal which i try to avoid. What I have is the roof of a building and I/m trying to add puddles on it. I know there are a few ways to do this, but I no matter what I do I can’t get it right. I wish I could use Andrew Price’s method and use a displacement map on the roof, then use a plane at its center to represint the water. That uses to many vertices though. I tried using a noise texture as the factor and just made those spots 100 percent reflective but it didn’t even shown up. Is there a better way?

That would be flat roof, yes? 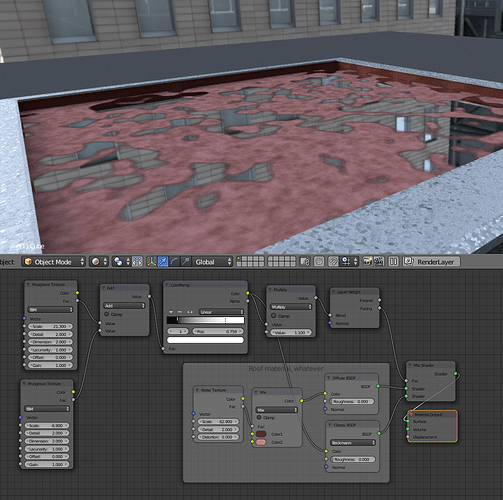 nice solution eppo****
like the way you have added 2 musgraves (think I know why but have to try that, if only to see if I guessed right)
I’d have painted a mask lol

to OP try eppo’s way it will give what you expect to see ! is no need to make a puddle, just change what you see

Everything makes sense to me but the layer weight. What’s that do?

It mixes between shaders based on whether or not a face is pointed at the camera.

Ok…I’m obviously doing something wrong. I made my node tree nearly the same as eppo and the puddles are not reflecting. There’re just horrible black spots everywhere. I also tried to make them slightly transparent but that was a complete failure. 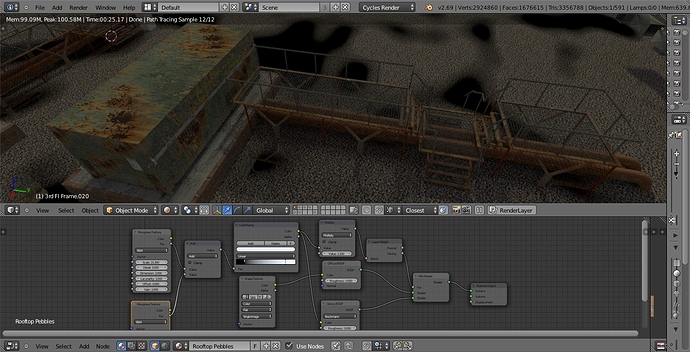 And your Environment is? Black Skies, lone Sun?
Only finetunig is done via Multiply before Layer Weight and set up some nice Sky enviro to better see reflections.