Put 2 seperate textures on each side of 1 plane

this is my first post on this forum that has helped me a lot already on my quest of getting into Blender.

I need to animate the flipping of a (newspaper) page. I found a way to achieve that by applying a simple deform modifier to a plane while rotating it, it’s so easy and looks pretty good. Now the trouble starts: Obviously there need to be different images on each side of the plane.

I found two excellent tutorials which show exactly how that can be done editing the nodes of the material. The result is a single faced plane (just like any default plane) but actually a different image texture on each side of it, fantastic!
However, I cannot get it working! I fail to reproduce any of the two tutorials. In the tutorials they use an older version of Blender, some of the used features are no longer there in 2.74. So I am wondering if it’s at all possible with the current version or the possibility somehow vanished with recent changes in the program… Most likely, however, I am just not getting it quite right due to lack of deeper understanding of what is going on in the materials/textures nodes. Anyway, I always end up with one of my two textures showing on both sides. No matter what I change.
Does someone have an idea of what I should be considering? Especially regarding the current version?

Here are the two tuts, both very good in my opinion:


I find the approach very attractive in terms of simplicity. There are other far more complex explanations that scare me off a bit. (Scripting, workarounds that seem to take like an hour to get the same thing done…)

Or: How else could I create the effect of one page flipping, having a different image on each side? I already tried parenting to an empty object but as far as my research shows modifiers don’t work on groups / hierarchies.
A third approach was to have two planes, each with a separate modifier, sticking very closely to each other, so it looks like one page and then clone the rotation / modifier automation key-frames manually. It doesn’t work because during rotation / deformation the planes awkwardly overlap and it looks horrible.

Thanks a lot for any helpful thoughts!
kind regards, s

ps: I know there are one or two old threads on this. But they aren’t helping me because the features of blender seemed to be so different at the version discussed in the threads that it sounds like a different program now if you didn’t use those old version back then.

In the tutorials they use an older version of Blender, some of the used features are no longer there in 2.74.
From a quick look at the tutorials I don’t see anything that is not in 2.74. The geometry node which allows you to have a different material on the front and back of the face is still used.

Are you using the same renderer as the tutorials (Blender Renderer and not the Cycles Renderer ?)

Show us what you have come up with so we can see where you have gone wrong. Ensure you pack all textures in the blend file using the File / External Data menu before saving your .blend file. and supplying a link to it

Shouldn’t be too difficult 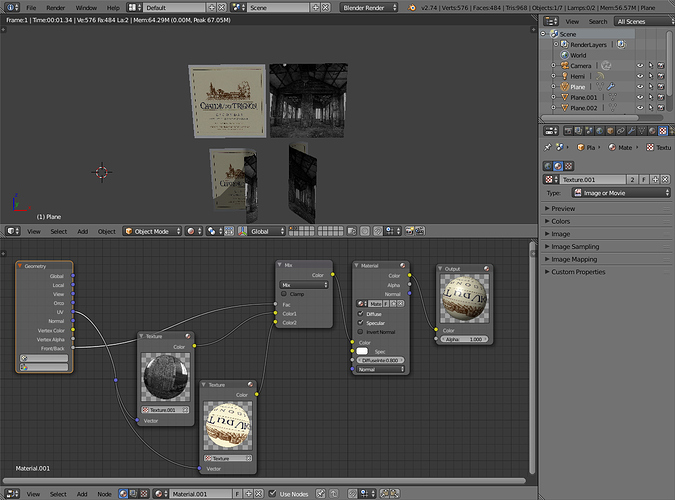 Blender render can mix material node output but this only mixes colors based on the front/back value from the geometry node.

Blender render and Cycles render materials aren’t compatible but the setup logic for Cycles is the same.

thanks both very much for your answers. Just now I was able to recreate what JA12 showed here. It’s a 2.69 version here on university machines but I am, agreeing with Richard, sure now that it has got nothing to do with the version. I must have overlooked a cable in the nodes editor. Well, now it works and I hope that I can still recreate it at my home and working machines.

I am still confused with some things here. Where to load the images… I can load images in UV/Image-Editor view or I can load them in the object properties in the textures tab. And those UV-Maps… in the object data tab. how do they relate? In one of the tutorials sbd selected them within the geometry node, apparently to grab the texture coordinates. Now in this working method this seems not necessary, the coordinates for mapping the textures are drawn from somewhere else (I don’t see where I ever connected the mappings made in the UV/Image editor with the material…)

And why can I see the outcome of this two-sided material only in render display mode and not in material display mode? As far as I can see it we are working on a material after all. Or is “everything” completely different as soon as we edit something with the node editor? Maybe those things only trickle slowly into the brain with time…

Thanks anyway for helping me out!

I attach the working file. Maybe someone opens it and thinks: “ha! that noob, i gotta tell him x y z…”

Also, you don’t need two UV maps to have two different sides but if you want to use two different UV’s to scale the other for example, you could tell the textures to use different maps 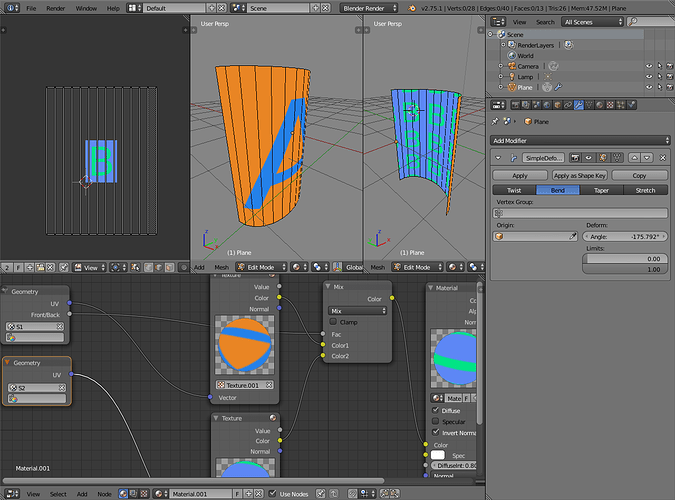 Thanks a lot for that insightful response! Makes me really happy, firstly I got it working also at home finally and secondly I can view the result in material view. I could swear it was different on the other computer

(probably not really)
No seriously, it feels a little like the puzzle pieces slowly fall into right position. Thank you!