You now have something to worry about. Putin believes the United States deliberately sparked the conflict in Georgia to assist a specific US Presidential candidate.

This is the former head of the KGB, one of the best spy agencies ever to exist - suggesting a conspiracy you’d normally only hear from the likes of Alex Jones.

Since this forum loves conspiracy theories, I thought I’d throw that out there.

What will be next, WW3, Cold War 2, the return of bomb drills in schools?

In the same article Russia says it has a missle that can penetrate the US missle shield, not if the US gets wise and upgrades the technology behind its development.

Sorry folks, but this is old news.
We know the U.S. snuck attacked Russia via Georgia.

What we are talking about now is that russia quickly mobelized warships and airplanes equiped with nukes to surround U.S assets.

what we are talking about now is all out nuclear war with russia.

We are screwed.
I foresee bush postponing the 08 election and instituting Martial Law.

Here is a good article
http://www.thisislondon.co.uk/news/article-23545668-details/Military+help+for+Georgia+is+a+‘declaration+of+war’,+says+Moscow+in+extraordinary+warning+to+the+West/article.do

Bomb drills are important. I would love to see that happen. I’d also like to see a new movie made similar to the old docu-drama “Threads”, and other nuclear-war awareness material. The more people who prepare, the less who end up dying.

Here is a FOX News interview with a few survivors of the conlift
She thanks the Russian troops for saving her life, and Fox is forced to cut them off

CD, we don’t have a missile shield. The reason we don’t nuke Russia, and they don’t nuke us, is the assurance that we or they would be committing suicide from the retaliatory strike.

Reagan’s pitiful Star Wars missile defence can’t even hit a target when they know when it’s taking off, where it’s headed and has a tracking beacon on board. “Up grading” this will still not be able to stop a Russian first strike with MIRV warheads on ICBMs. Of course they have a missile that can penetrate our missile defence. In fact, almost all of them can. The only reason Reagan thought up Star Wars was to prevent the defunding of the military industrial complex when he ‘ended’ the cold war and people started talking about the huge peace dividend this would bring to fund social and infrastructure programs with the money that would no longer need to go to defence.

The purpose of putting anti-missle batteries in states surrounding Russia, and “upgrading” them, if you will, is to potentially stop Russia’s retaliation after an American first strike, when presumably a lot of their ICBM capability will be destroyed. It profoundly destabilizes the current balance of power between the US and Russia, and if anything is likely to provoke WWIII and nuclear armageddon, that would be it.

Upgrading our anti-missle defences is not wise, but is one of the stupidest moves we can make. We’d be much better served by reestablishing the ABM treaty and continuing to negotiate a reduction in nuclear arms.

Are we seriously discussing the possibility of NUCLEAR WAR here:eek:?

I foresee bush postponing the 08 election and instituting Martial Law.

The privilege of the Writ of Habeas Corpus shall not be suspended, unless when in Cases of Rebellion or Invasion, the public Safety may require it.

Nothing about foreign affairs.

Whoever, except in cases and under circumstances expressly authorized by the Constitution or Act of Congress, willfully uses any part of the Army or the Air Force as a posse comitatus or otherwise to execute the laws shall be fined under this title or imprisoned not more than two years, or both.

The Secretary of Defense shall prescribe such regulations as may be necessary to ensure that any activity (including the provision of any equipment or facility or the assignment or detail of any personnel) under this chapter does not include or permit direct participation by a member of the Army, Navy, Air Force, or Marine Corps in a search, seizure, arrest, or other similar activity unless participation in such activity by such member is otherwise authorized by law.

Even if the president wanted to, he needs permission of congress.

Ron Paul and Putin have the same belief it appears. We’ve instigated the matter. 2 minutes in -> http://www.youtube.com/watch?v=BOhk0JeoZtE

Pravda - http://english.pravda.ru/ - hyper polarized, it almost reads like Prison Planet. The question is, who are you going to believe?

Russian hypersonic bombers could be coming to a Cuba near you!
http://english.pravda.ru/topic/bombers-592/

…We’d be much better served by reestablishing the ABM treaty and continuing to negotiate a reduction in nuclear arms.

Its a pitty more people don’t support this. 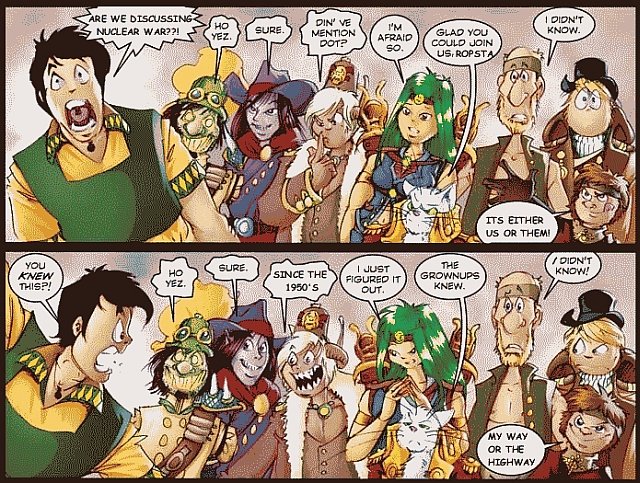 (sorry, ropsta, the devil made me do it.)

Nothing about foreign affairs.

Even if the president wanted to, he needs permission of congress.

Here is the presidents “Blue prints” for just this situation.
This is just the cover page of the article,
The excecutive branch will not allow congress to view the rest of this article.

Here is the presidents “Blue prints” for just this situation.
This is just the cover page of the article,
The excecutive branch will not allow congress to view the rest of this article.

I take my hat off to who ever typed this - the grammer and spelling are perfect.

No nuke war. It’s not going to happen. Ever. Fire one and you’re dead, nobody is going to use them.

I do believe that the US probably has something to do with the Georgia-Russia conflict but meh.

You’re probably right Sandrew. However it doesn’t hurt to remind people what nukes can do. I suggest someone test detonates a nuke on the surface again. I know this was banned internationally, but it could go a long way to reminding people that the nuke is not some myth from the 1950s, and that it’s still very much a threat.

That was funny until I saw my name in it.

That made it kinda…

(sorry, ropsta, the devil made me do it.)
and number two, I’ve cast myself as an overdressed white cat.

That makes it even more insulting.:no:

If this keeps up I’ll report BlenderArtists as an anti-wit/humor forum, and all my dim-witty buddies will destroy you!!!

I am an archangel and I will reign down pain on my enemies.

Is it the same old excuse again? Do something totally irrational and blame it on the US?

If they thought the US was behind it (…) then why not try to “outsmart” the United States by not giving in??