Putting lots of holes in an object

Hi guys,
I’m trying to create a cpu in blender, it’s very hard since it’s virtual and so when I plug it in nothing happens but I’m trying (he he.)
No seriously, I’m trying to make the socket and I can’t figure out how to put a bunch of holes in it. If I were putting in just one or two I could do it by manually remaking the mesh but when the number exeeds 200 you get kinda sick of selecting a few verticies and hitting F (fill.) Is there a quicker way to do this?
Also I’musing cycles and for the cpu’s pins I used a hair particle system but if I remember rightly in cycles particles don’t render, any hints for that?

Well just model one pin and the set upa a particle/hair system and have it emit the pins on teh faces you want them to be on.
As far as the socket,
Start with a plane, then add 2 loop cuts in a cross pattern (image below) and delete the center vert. Then(after placing teh cursor at the center vert) in edit mode, add a circle with 8 verts and scale it down a tad. Then select all verts(make sure you enable looptools in user preferences) and hit W>looptools>bridge and it will connect all the verts in that plane. 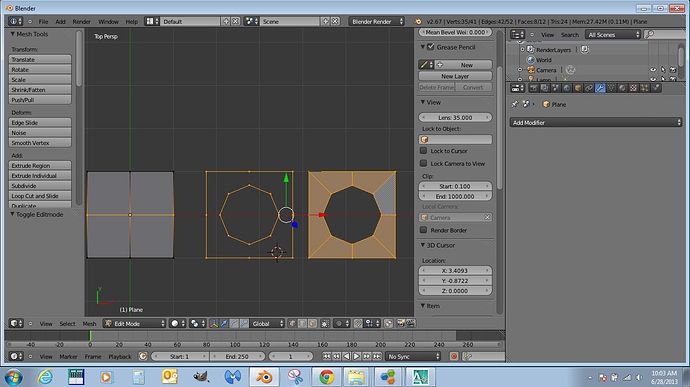 Then, add an array modifier, and array it in the x axis as many holes as you need, select merge in the panel. Then ad another array modifier and make as many rows as you need and again select merge. Then apply those modifiers and grab teh very outside loop and extrude slightly out, then add a subsurf at level 2. Frome here you can delete the holes you dont want and extrude from teh outside to make the shape of the socket. 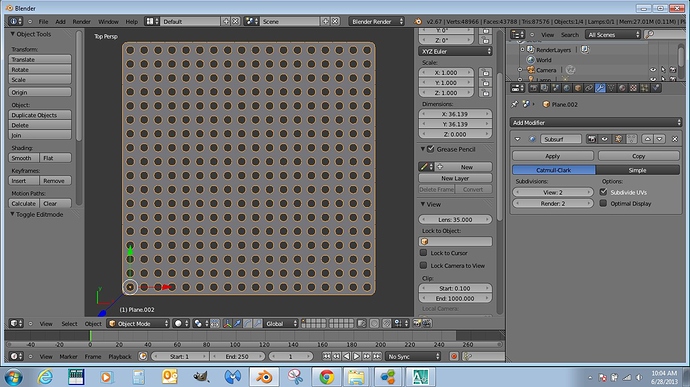