I’ve got a camera move exported from Syntheyes that matches some footage I’ve shot for a short film.

The problem is, I’ve sped up PART of that footage in After Effects, looks great, but how to get the solved camera in Blender to match up with that footage? I have a curve from After Effects that I’ve applied to the x coordinate of a plane (just somewhere to put it…) so for any given frame in Blender, the plane’s x-coordinate tells what frame that displays AFTER the time remapping (so for example, the new camera’s position at frame 44 must be that of the old camera’s position at frame 49.48157)

I’m not new to programming, but I have never written any code for Blender before and I find it perplexing as to how anybody gets into this. Maybe I’m just not looking in the right places, but I can’t for the life of me find ANY sort of up-to-date reference for what can be used in expressions.

Anyways, what I need is an expression that sets the position of a camera “new camera” to the position of the camera “old camera” at a frame/time x where x is equal to the plane’s x-coordinate at the current time.

In After Effects, one would simply say something like thisComp.layer(“ImALayer”).transform.position.valueAtTime(time)[0]; I can’t find any such function in Blender (nor did I expect to, but I didn’t think I’d have THIS hard of a time adjusting).

In example let’s say that in 20 frames cube travels 10 units.

So that means than if I multiply the position of cube with this analogy then at frame 15 I will have reached the exact required position. 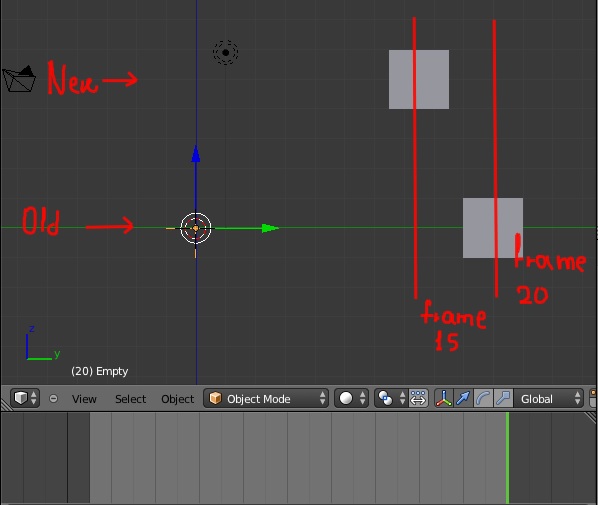 Oh but the time remapping isn’t to be just some constant factor applied to it. The clip starts at regular speed, then speeds up slightly for about a half second, then slows down again to regular speed. It doesn’t instantly speed up or slow down either.

The source frame is represented by the plane’s x-coordinate, and when graphed, this does not result in a straight line, thus it’s more complex than simply multiplying the current frame by some factor.

Also, I’m well aware of the math behind it. The problem is PURELY how to write this in Python in Blender.

Yeah it’s a bit more complex than that. Well here’s my ideas in order of easiest / most naive to more complex / more realistic.

Yeah it’s a bit more complex than that. Well here’s my ideas in order of easiest / most naive to more complex / more realistic.

Exactly! That’s what I’ve been trying to figure out is how to get the value at a certain time through the IPO curve. I know there’s an evaluate(time) function for fCurves, but I can’t figure out how to get to the fcurve through the actions, through the camera object. This is extremely frustrating…

Look, I appreciate that you’re trying to help, but you NEVER EVER EVER NEVER track processed video if you want accurate results. This shot was extremely time consuming to track in the first place because of low-lighting, motion blur, lens distortion, and few features to track. That, coupled with the resampling of the image for the stabilization that I’ve applied to it (repainted the edges by hand, took FOREVER!) means the image quality is degraded even further… not talking about compression, just the slight blurring that results from resampling.
But a better reason to not do it again is the fact that when you time remap something, you’re not REALLY slowing down the footage, you’re just distorting what you have to make it LOOK like it’s been slowed down… I mean yea, it obviously plays back over a longer duration, but where do those extra frames come from? They come from warping the image so it interpolates from one frame to the next. While it may look fine to us, it won’t “look” fine to the computer anymore. Yea, it’ll probably solve, but probably won’t be a decent match.

But I shouldn’t have to! The data is RIGHT THERE, I just need to compress the time! Also, it doesn’t help at ALL that the ONLY feedback I get is “invalid python expression”. Whoa! No kidding?

Alright! Finally figured it out. Here’s the expression I used for the x coordinate:

Oh dude you are kidding me, I just figured it out too. Well the hell with it I’m posting my solution too, as it has been rewritten as a function somebody might want. It’s roundabout, hacky and most copied from Atom, (credit given in the script, and again thanks Atom) but here it is:
1)Create an empty and keyframe some x rotation on 1st and last frame.
2) Create a dummy driver for it’s y rotation, which will fire every frame
3) Create a var in the driver for the x location of the plane containing frame data and pass that into a script
4) Pass that x location (frame) into a function I rewrote from Atom called getPositionAtFrame(objectname,frame,infotype) where infotype is “loc”,“rot"or"scale”)
5) Copy the loc, rot and scale to camera2.

Anywho, here’s the blend with the script.
time-mapping-lazycoder.blend (477 KB)