Q: How to do a "sunburst" material?

I’ve only been using Blender for a couple of weeks. I’ve started getting the hang of getting decent-looking materials, and I’m looking to push my abilities further. One thing I haven’t found anywhere is how to do a “sunburst” type material, where a gradient fades to darker (or sometimes lighter) shades toward the edges of an object, following that object’s perimeter.

Ideally, I would like to be able to do this procedurally, rather than baking the silhouette of the object right into image-based material or texture files.

I’ve figured out how to do a pretty nice linear “fade,” but would really like to get a proper burst working. Is there a way to use the object’s alpha channel to find its perimeter in the X-Y direction? Then I could apply either an RGB Ramp to that perimeter contour, or do a series of blurs and mixes. Conceptually, I know how I want it to work, but practically, I’m having a hard time trying to figure out how to actually do it.

Below is a screenshot, and I’ve attached my .blend file with an example of the style of gradient I’d like wrapped around the edge of the model.

Thanks for any assistance! 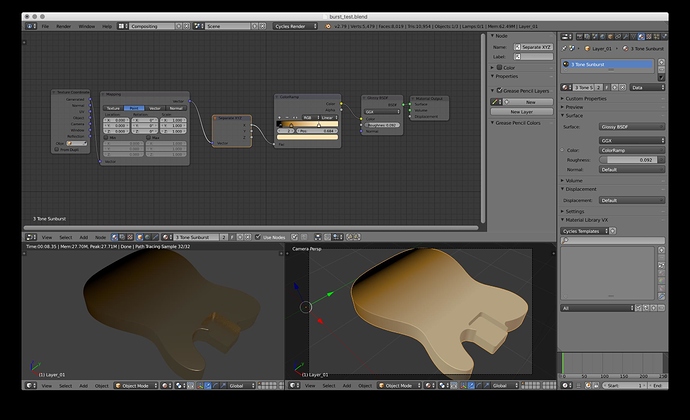