Yes, I’m starting to feel guilty when posting another example in stead of the happy announcement of QuadRemesher for Blender we’re all waiting for.

With zremesher one may need to play with the settings a bit, making some groups by normals and detect edges can improve the result when working with cad stuff.

True, but I did notice that the new ZRemesher algorithm can suffer from some really mangled topology in certain spots, in order to achieve good retopology on the rest of the surface. In fact, I find myself often switching back to the legacy algorithm for organic model retopo.

I wonder if ZRemesher 3.0 was created by Maxime as well, or if a different developer coded the upgrade for Pixologic.

Indeed, amazing results. I’m not into retopo in general, but I’ve tried out some basic solutions for demanding models with complex geometry. These are the best results I’ve seen by far. Very clever positioning of quads and ideal density variation on the most demanding parts of the model.

There is no other retopologizing tool that gives results of such a quality nowadays. It would be good to see a Blender compatible version as soon as possible.

myself to sleep every night QuadRemesher hasn’t been released for Blender yet.

Id use it to retopo those crappy Furniture models from obscure model sites that export everything in .3ds full of triangles only.

I bet they do it on purpose.

Here is another test I did in 3DS Max. This one was a little trickier, as I had some smaller/dense cuts with curves, and non-uniform faces/density. I ended up breaking off the end cap, and doing 2 passes, to get a better result, but it ended up looking pretty good in the end. 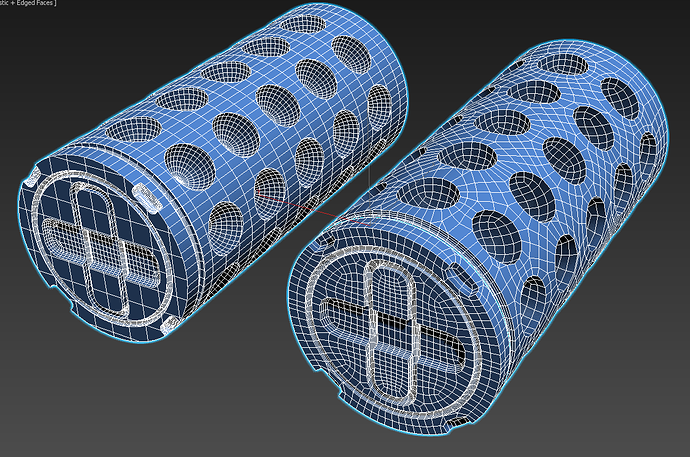 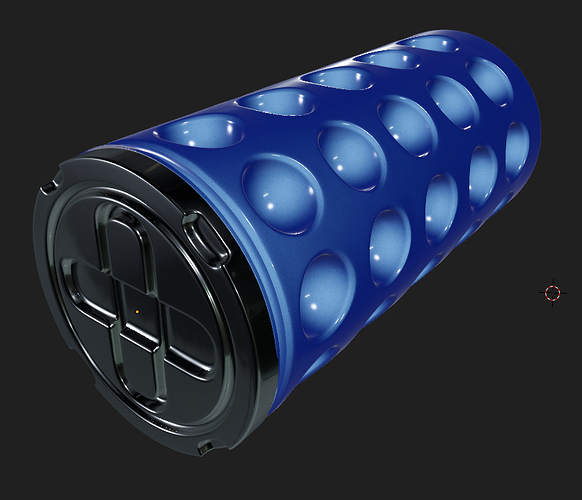 I will say, it doesn’t seem to handle meshes that are too smooth/no hard edges as well. Or rather, meshes with collapsed Bevels or basically a collapsed highpoly mesh. It can do some strange things. It might be a matter of settings in the tool, but so far I haven’t had really great results. Or the best results have been with a mesh that has hard edges/clean cuts for better edge detection.

This is to be expected. I beta-tested QRM in Max and just like ZRM it operates best on hard angles, due to the algorithm using smoothing groups/hard edges. Collapsed high poly meshes with rounded corners will be treated as organic meshes and output poor results.
Max has its own native auto-retop modifier in development at the moment. Has some nice features, but still in the early stages. It’s beta, but i can mention it as they’ve already demoed at Siggraph.

Also testing HardMesh plugin for Max at the moment. Very nice tool, and a modifier too.

The previous ZRemesher algorithm (2.0, now called Legacy in ZBrush 2019) is quite competent in retopologizing organic meshes. As I do a lot of cartoon character modeling, I’d be disappointed if QuadRemesher wouldn’t retopo those nicely.

@Kickflipkid687, could you please show some QuadRemesher results of a smooth organic mesh, like a cartoony character? I’m eager to see that.

Not the best test maybe, but I took the dog from Zbrush, which is already Quads it seems like. If I Run the Tool, with same Target Quad Count, and also testing the Adaptive Quad Count, this is what I get. Seems to do OK… but you lose the fine details, at least in this case.

BUT, you can paint Vertex color where you want more detail, so I can test that too… 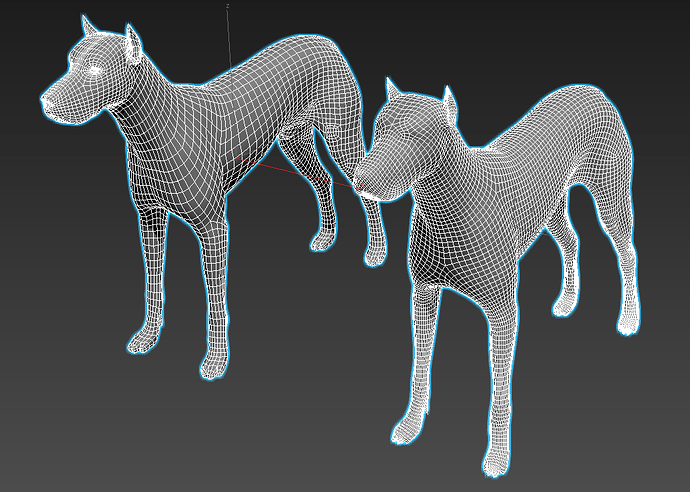 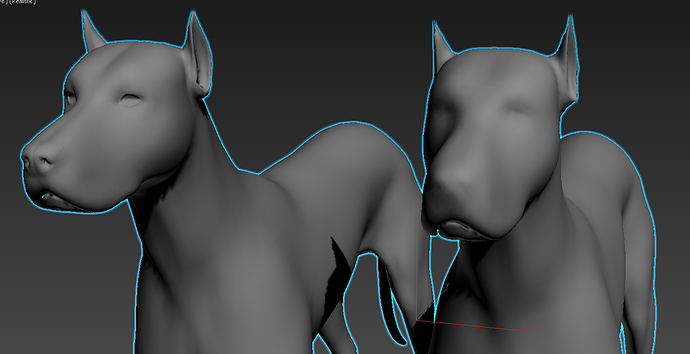 Edit: Trying to add more Density via Vertex color, technically worked, but this does not look too good… 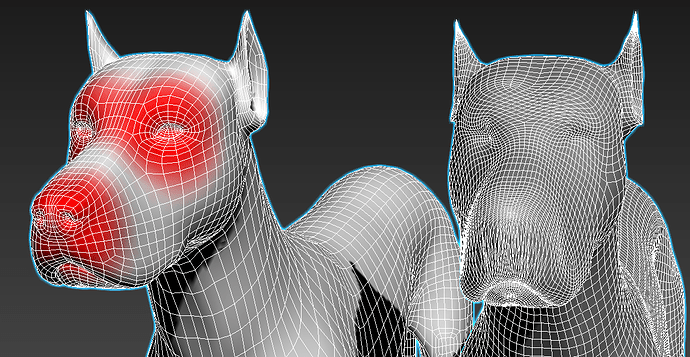 I added Symmetry on this one, since can do some weird things otherwise/not be what you might want otherwise. 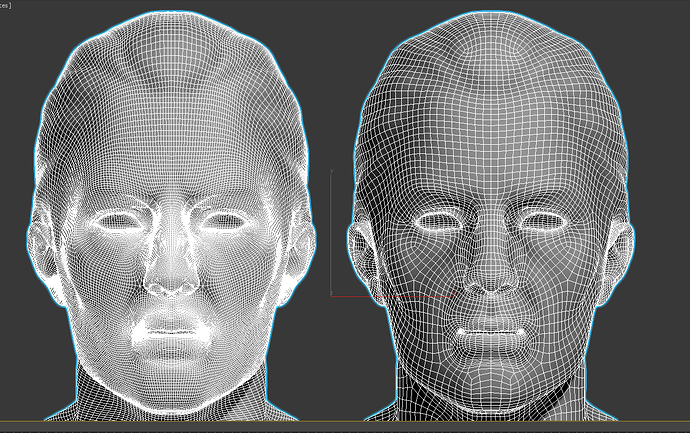 Thanks a lot @Kickflipkid687, much appreciated. I think the retopology structure looks quite OK on the organic models. I’ll mostly be retopologizing non-complex, symmetrical, organic models.

Also interesting is seeing the dog’s ears being preserved nicely. Auto-retopologizers have a tendency to choke on thin areas. That also happens using 3D-Coat’s Autopo.

I can’t wait to get my hands on this!

Did you check for spiral loops? This is the biggest issue with ALL auto-retop solutions for characters.

One of the innovative features of Max’s new Retopology modifier is the ability to edit singularities.

One of the innovative features of Max’s new Retopology modifier is the ability to edit singularities.

Nice. I loved that in Instant Meshes, but it’s too bad IM’s edge loops have too many triangular dead ends.

So tell me, are you sneakily trying to get me warmed up to retry Max?

Metin, please tell the dude to “chop-chop” and give us the dang thing already! I don’t care if it occasionally crashes and whatnot… I NEED this mofo… like yesterday! I’m ready to pounce on a subscription the very minute he has it ready.

So tell me, are you sneakily trying to get me warmed up to retry Max?

Well, I don’t want to be responsible for you losing any more sleep than you currently are, thinking about QRM for Blender.

Yes, IM in general was a bit of a dead end.

Metin, please tell the dude to “chop-chop” and give us the dang thing already! I don’t care if it occasionally crashes and whatnot… I need this mofo… like yesterday! I’m ready to pounce on a subscription the minute he has it ready.

From beta Max/Maya to release was only a few months, so I’m sure Blender/Houdini beta will be sooner rather than later.

The previous ZRemesher algorithm (2.0, now called Legacy in ZBrush 2019) is quite competent in retopologizing organic meshes.

ZRM 2 vs 3 didn’t change for organics. The focus was on the hard-surface results. ZRM 3 still suffers from spirals, and this is the basis of QRM.