Question for the pros re: displacement maps

Can anyone shed some light on this? I was told by a 3DS Max user it’s possible in Max, but he didn’t sound convincing, and he’s no longer a 3D modeler, so I want to call Shananigans on him.

A displacement map will only work if you have enough geometry to displace. Try subdividing your cube like 20 levels, then apply the displacement.

The Displacement map is used as part of a Material, and multiple materials can be applied to a mesh on the basis of selected faces. So create a Material slot for your displacement map material, apply it only to the face that needs it, then apply a different Material (which will have its own Material slot as well) to the other faces. This will require UV unwrapping the object, a simple matter for a cube. Make sure your Displacement texture has UV selected in the Mapping options.

Yeah… I haven’t figured out how to do a displacement map within the material editor (I’m assuming that’s what you’re saying). I used the Displace modifier and I’m guessing that’s more of a universal modifier that affects all geometry. I need to read up on how to create displacements outside of this method. I read the 2.6 guide on displacement maps and it was incredibly sparse in details.

In that case, use the Vertex Group option of the Displace modifier to define which parts of the object get the displacement.

You’ll find that a Vertex Group option exists for many modifiers, and usually does the same thing, lets you selectively apply the modifier effects.

Since I got you here, if you don’t mind… the thing about Blender that always had me scampering away was how to apply textures and materials to particular parts of my model. So for instance back to the cube. I never know how to apply different materials to different sides.

I made a laptop one time in Blender and I literally made every object/face a different piece just so I could do so.

Apply materials is the only thing that I can’t make sense of… especially once you go into that UV Editor deal where your object’s materials are all flattened out (that scares me). Any advice regarding materials… maybe I’m making it more difficult than it is.

Add several materials in the material bin, select the faces in edit mode that you want the highlighted material applied to and click assign. If this is what you are looking for. 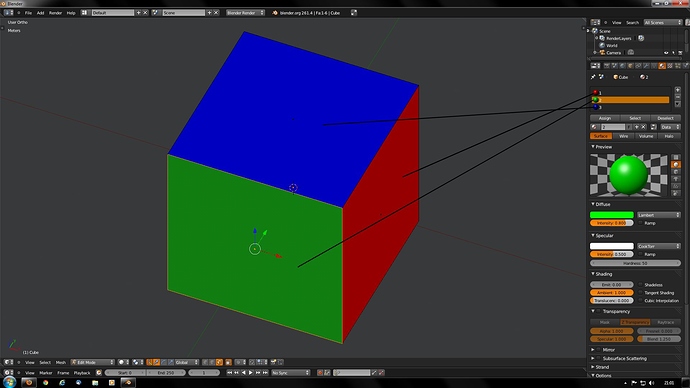 The UV Editor is where you map a texture to your mesh, but doesn’t really have anything to do with assigning materials. As ajm described, it’s a matter of filling the Material slots and Assign-ing them to your mesh (selected faces) in Edit Mode. In ajm’s screen grab, the + button next to the Materials list (1,2 & 3) adds another slot. The minus button removes a selected material slot.

Don’t be frightened by UV unwrapping, it’s a bit arcane at first but becomes much easier with practice. Think about it as cutting your mesh surface into pieces (via assigning Seams in Edit mode) that can be flattened out with as little stretching as possible. Then the flat pieces can be laid out and “colored in,” which is basically what mapping them to an Image texture does – the mesh faces corresponding to the flattened UV mesh get “colored in” by the image pixels the UV pieces overlay in the Editor window. This is what’s called “mapping” the Image texture to the mesh.

When I ditched Blender about 6-8 months ago it was because of the texturing aspect. I think, although I can’t remember my exact issue… I’m assuming it was the UV Editor.

When I use Sketchup it’s painfully easy. I simply select a face and then import a mesh (one menu deep). The texture would appear on the face and then you could scale, rotate it, etc. After accepting the location you can always Right-Click and choose to re-position it.

After what you guys said, applying basic materials is easy [now]. But say I’m making a laptop and want to apply keyboard icons (i.e. QWERTY, 123, etc.). It’s be nice to simply import your texture on the face and then allowing you to edit it. I think I remember viewing my textures (specific location textures, like a sticker on a material) having to view it in this splayed out manner.

Is there an easy way to achieve this… since my previous question was bush league.

I found the issue that I was pondering regarding textures.

If I make procedural textures and materials I can assign them to any face of my cube, no problem, as soon as I introduced Image textures (say a brick texture I found on the web) it assigns it to all of the geometry and not just a face of the geometry.

What up with that?

Update: Wait, OK so I applied a new material to all, then the brick material to one face and it worked. At first it didn’t. Ah man, sorry.

There’s really no reason to expect Bender to act just like Sketchup or any other application, nor should they act like Blender. Each is designed to accomplish certain tasks, and may have features and implementations that differ widely though they have similar goals.

There is a distinction in Blender between Materials and Textures that may not exist in Sketchup. Textures are commonly external images to be applied to a mesh (though there are also procedural textures). In order to do that, the image must be mapped to the mesh in some fashion or another. UV mapping is only one option for this. In the Mapping section of the Texture panel are many different options for mapping, each fulfilling particular goals.

Materials, on the other hand, are all procedural to the extent that they are settings that influence how the renderer portrays a surface, but do not require any image to accomplish it. Such characteristics as reflectivity, specularity, transparency, etc., are all materials properties but don’t have to have a texture associated with them.

It seems that Sketchup (like some other apps) applies an image directly to a face when imported as a texture, probably using planar mapping as a default. This is a pretty common way of doing textures in apps that don’t have a deep materials capability like Blender. But it can also be limiting. I have to admit I’d like to see Blender have some more usable real-time texture manipulation tools, but once learned, its methods work just as well, though maybe not just as conveniently. In return for a little inconvenience, Blender offers a much larger range of option for specifying how a surface can look when rendered.