Hi all
Quick question under install read me file. It states to execute the .exe file to install. I do not see the file… to install. I did however click the Blender icon and it launched without being installed. Only un zipped. Do I just uninstall 2.68 and put this whole folder in my desired drive?
Win7 Pro 64b ? Thanks for the direction on this 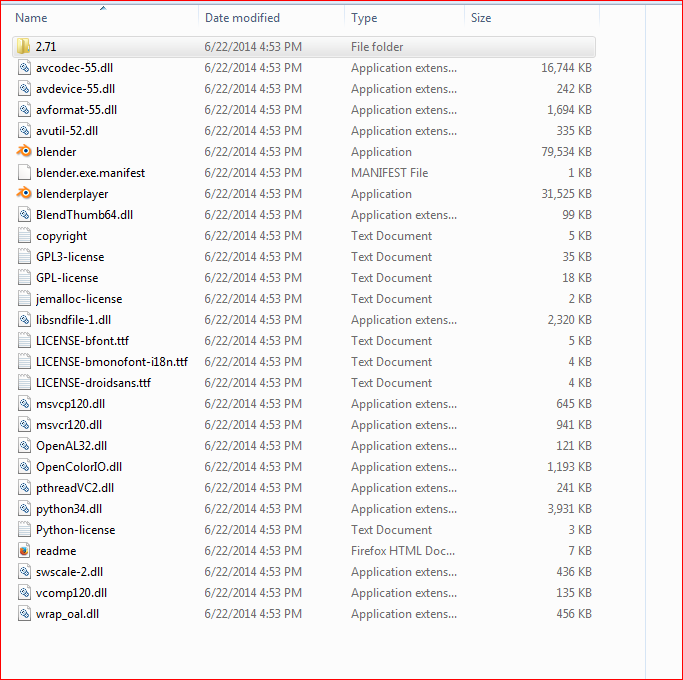 Blender is distributed in two forms:

The installer puts it in the usual place.

The zip file can be unzipped and run from anywhere.

The really handy thing (under Windows 7, if that’s where you are) is that the config files are always in the same place:

Thanks for the replies. However DO I need to uninstall the Old folder ??

“Do I just uninstall 2.68 and then just drop this whole folder into the desired drive?” (Since the one I have is a standalone)

So I started to use the uninstall file in 268 (see pic) and thought will I lose all my changes? IGE: How my mouse works when rotating views to name one…
There have been tuts and changes via preferences as I have been learning the last 4 months and now I am wondering will I need to re set all them up again?
Where is the update button to keep my interface the same and only update the new toys? 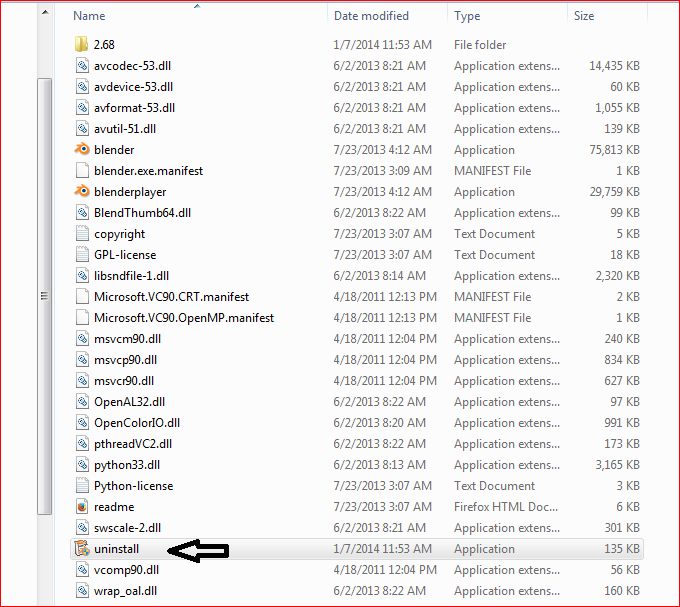 BUMP … I would like a straight answer to my question(s) is there anyone out there?

"The really handy thing (under Windows 7, if that’s where you are) is that the config files are always in the same place:

Were you trying to tell me to uninstall and then place the new Version in that folder and to then drag out an icon as a shortcut.

Ehrm… if i may…
It’s fine that you know that your prefs go to AppData\Roaming\Blender Foundation\ and then 2.5, 2.6 and 2.7. However for all 2.7x it will be the same folder and same settings if i’m not mistaken. They will either stay or will get overwritten and this is what you may want or not.
If you try out some 2.7x from whatever source (it better be from official site or buildbot of course) you might want your previous settings intact where they are for a while.
For packed (zip, 7z) blender way to do this is to create folder named “config” in where you have unpacked program, under the folder 2.7x.
You could try to run unpacked blender, save User Preferences (they will be saved in created “config” folder) and after copy over previous settings from AppData\Roaming\Blender Foundation\2.7 but this is not error prone. It’s better to create them a new. It’s pita if there are a lot of keys defined but you may run into problems by copying old settings. Coders change things from time to time.
To be on a safe side initially there is one setting you need to change as soon as you fire up new blender - Scripts folder. Make sure you point and save new blender’s folder in that UserPrefs field.

No need to uninstall anything - here 2.5 is working perfectly fine along with 2.7
Drag that shortcut and try out news ;).

IF it’s a new version IGE 2.71 no need to uninstall 2.68 simply place in Blender foundation and drag out icon for shortcut if desired.

OR… I can try creating a config folder and placing it ??? In Blender foundation folder? In 2.68 folder and then dropping 2.71 into THAT same area. (Very unclear on my end) Are you telling me to copy and paste all of 2.71 files and drop them in 2.68 AFTER creating a config folder? Which would just be an empty folder at this point and AFTER dropping in the new files, Win7 will ask do I want to copy and replace? If I say Yes to All, it will then make the 2.68’s upgraded to 2.71–IF I understood you. I guess Win7 knows how to use that config folder?

All after the disclaimer that it is a PITA as some things change in newer versions whereas an old command could equate to something different… At which point what is the point of keeping an old version other then a rollback if need be…Wasted space if not needed. Right?

Thanks for elaborating. Sorry for the redundancy but what seems clear to you, is not always clear to the one reading it…

Yep. I’m perfectly fine with the idea of different understandings of things. And i’m not even trying to clarify tings using my own language.
From the bottom:
Wasted space - for me that is huge - 20 Gb, different versions, source code for some, source and compilation leftovers for the things you need to actually compile blender, different versions of scripts and so on.
Now the math - how much that would be out of 1Tb HD space? But yea, it is a waste of space and sane would be to have say 1 or 2 Gigs of some core turning points in Blender’s history.
At which point to clear out space - spring cleaning ;), OS change… Idk, but then there is a possibility that on the next day you would need that one version you cleared out yesterday…

Configurations and their locations - there are two on the pc you use Blender: Global and Local. If Local is present Blender uses this, if not - Blender uses Global which is created if you use install.exe. On Win Global is located at that Blender Foundation\2.xx folder. install.exe (or whatever this is called) does not create Local “config” i was talking about.
You create Local by creating folder “…\2.71\config”, this is next to where blender.exe file of some version is.
This Global/Local allows you to take Blender on the stick, plug it into the pc where is some installed and differently configured Blender and use your personal version with your special settings, not ruining or conflicting with one on pc.
This is what i use, only difference being that it uses folder on HD, not the memory stick.
Leave Blender Foundation as is ;). Do not touch it.

Using memory stick as an example: you do not copy or overwrite anything on PC, you browse to e.g. G:\BLENDER\2.71-169c95b\blender.exe and fire it. Your buddy’s 2.49 blender is still fine but you have shown him how 2.71 looks and feels on his hardware. Browse to G:\BLENDER\2.5x\blender.exe and see how that armature in that old file which is broken for 2.7 works. Or how that BGE shader script makes things look nice.

Any install.exe raises concern that something will get overwritten or messed up. I’d recommend using packed (zip) thing.

Folders - based on previous text wall 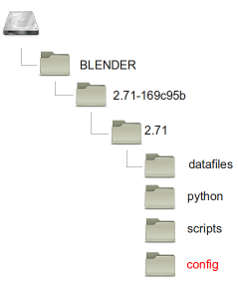 Win 7, before and after as any other OS does know nothing about what you want. At the best it would do something someone programmed in based on assumptions about your wish which is quite opposite usually.

Eppos,
“the next day you would need that one version you cleared out yesterday…” That is ALWAYS how it is. Or if you move stuff to storage a week later you have to go get it. (non computer stuff)

I found one of the challenges I was having. I did not have SHOW ALL FOLDERS and FILES checked off. That is why I could not find appdata roam or config files to makes sense of it…

I agree with leaving it stand alone if it works like that. I am running it that way. Ikari told me a ‘cheat’ when doing it this way to create a config file for each version to accommodate any interface deviations that coders my create in different versions. Thanks for elaborating on your file description with screen grab. “A pic is worth a 1000…words”

…week later you have to go get it
That’s where it comes from ;). Real life experiences.
And yeah, they tend to hide important stuff from users. Including not pc related stuff.