quick question: can you reverse a strip in the NLA?

can you reverse a strip in the NLA?

I have a fairly complex animation of a gun popping up from a door, and after itis done firing, I want it to go back down, and the doors to close over it, but I don’t want to reanimate the whole thing in reverse, when I could just tell a strip to play in reverse. I thought maybe I could scale by -1, but no such luck.

I found this answer for older versions:

just hit N over the NLA strip and reverse the Action Start and Action End numbers.

But it doesn’t semm possible to do this anymore.

(Which is what I tried before I searched the forums)

When did it last work? If it got dropped from the code accidentally I can restore it…

When did it last work? If it got dropped from the code accidentally I can restore it…

Just to let you know, I’ve just added this functionality in one of my source trees. I’ve added a toggle for this, so no more hacks with reversal of action starts and ends.

I’ve also added an option to mute an individual strip.

After I add a few more features around this area (NLA and Action editors), expect to see a patch and a build for windows.

Hmm I checked the 2.37a tarball, and the current CVS tree, and never found a function that did the requested (I checked for NKEY to see it).

Unless someone else comes up with a reverse strip solution, I don’t think this will get into 2.43

time for a bump, or did a solution turn up?

Looks like Aligorith completed this awhile ago, in 2.44 I see the references he is talking about in the strip I made for a simple action. 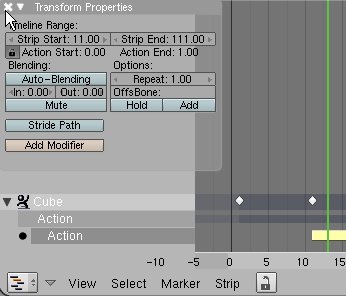 i found shift+m to mirror the keyframes in an action, i mistyped and discovered it! hurray! thanks anyone!

Shift +m does not work in 2.8 the answer now is to select the action you want to reverse, hit N to bring up Active Strip options , and check “Reversed” in the playback settings.