Quicktime removed -- anyone else bothered by this?

As a part of my Blender animation workflow, I render OpenGL animation previews for downstream composite tests. These “quick and dirty” renders I prefer as Quicktime files. (Final animations are always image sequences.)

With the removal of QT export in 2.79, I’m using AVI containers instead. I find the AVI codecs more limiting than what QT offered. Granted, I’m a Mac user, and am more used to QT than AVI. But am I the only one that regularly used QT exporting as a part of my Blender workflow?

The developer’s thread (here: https://developer.blender.org/D2333) suggests that Apple has deprecated QT. But Adobe’s video programs (After Effects, Premiere) use Quicktime containers and associated codecs all the time. In fact, most theatrical-release projects I’ve worked on used Quicktime as a part of their workflow, particularly with Apple’s ProRes codecs or Avid’s DNxHD codecs. Right now, I’m sending 4K ProRes 4444 files for a theatrical release project and 2K ProRes 4444 files for a television project.

In short, there remains a large constituency of professional users who use Quicktime Pro regularly, and Apple continues to support it (if only obliquely, see this short thread on Apple’s site: https://discussions.apple.com/thread/7872579), even in their latest OS. Most pro apps still support it. I think Blender should as well, if possible. The fact that we’ve removed QT entirely from the Blender interface was surprising to me. I haven’t found much conversation on this on BA or elsewhere, so I thought it was worth bringing it up.

I’m not 100% sure if OSX has this as an option, but selecting FFMPEG video has quicktime as a container option anyhow.

Also, are these final videos or meant to be high quality to be used for further composition in other software? If it’s the latter AVI raw is useful, but you may as well just use the image sequence instead.

Otherwise, why not just use .mp4 with H264 as the codec, which can be lossless if desired? Any particular reason to stay with quicktime? Any decent software should handle H264 in a .mp4 container as much as H264 in the Quick Time container, which is probably what your exporting to anyhow?

The trick is that even with the DNxHD option in 2.79 (which is surprising to see!), I don’t get the standard DNxHD dialogue export options (this was also the case in 2.78). Here’s what you see exporting DNxHD from Quicktime Pro: 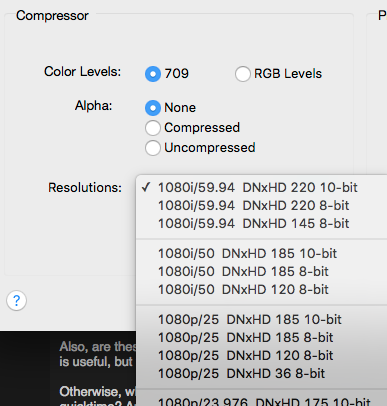 For the standard QT exporter, the list of formatting options is huge (and much, much longer than what I’m showing here). That’s how DNxHD works, and it’s annoying, but it’s also important when coordinating with an AVID editor who needs a specific codec to make everything work in real-time without having to re-compress everything you send.

To be clear, I’m NOT using Blender to produce deliverable Quicktime files. I either use Adobe Media Encoder, Quicktime Pro, or their associated applications (Final Cut Pro, Premiere Pro, etc) to do that. My final Blender renders are always image sequences, destined for a compositing app like After Effects. But someone else without Adobe or Quicktime Pro might need Blender to get to the Quicktime codecs.

As for H264: I never use H264 codecs for compositing; their interframe-compression structure slows down the process (however minimally, but when you have 100s of layers it starts to show). I prefer the larger intraframe-compressed files that will decompress faster, such as a QT container with a PJPG or ProRes Proxy codec. Blender 2.79 has an AVI JPEG codec which gets the job done for me.

I can function just as well without QT in Blender, but I still don’t see why we did away with it, since someone else might need it. And AVIs are a rarity in Mac-land; I almost never see them.