I was shooting for 500 poly’s but its going to end up around 600 hope to get it done by the end of the week. The anatomy seems kind of wonky what does everyone else think. Thanks.

update
I changed the shape of the head a bit made the shoulder armor and unwrapped him
(I kind of miss the old UV test tex) I’ll fix his uv between the neck and shoulder tomorrow. (Can’t believe I missed that) 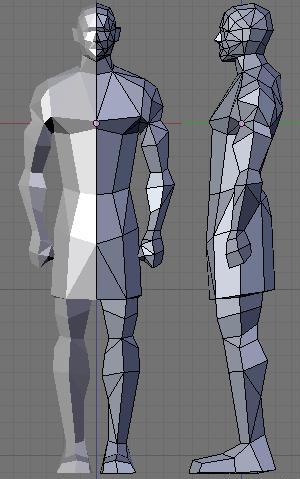 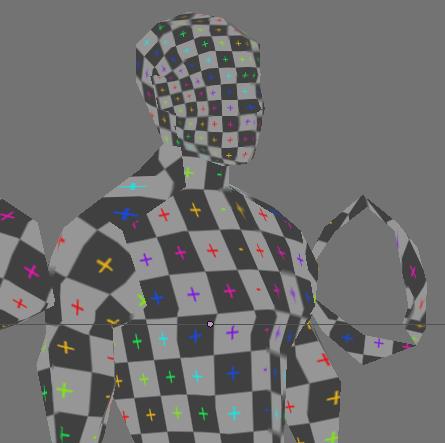 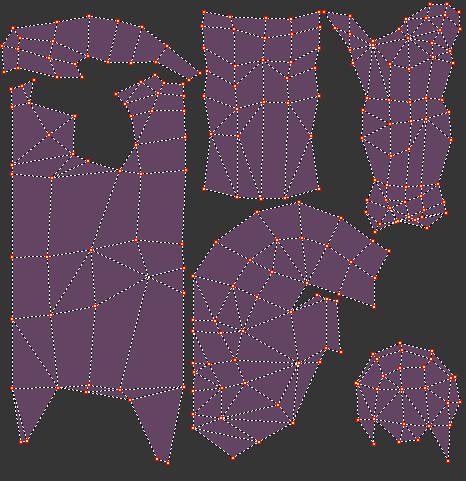 starting work on the face. Contrast be you my bane. Any pointers greatly appreciated.

update
Getting a little better face seems sharper…the thumbs look better by the way than the full image. 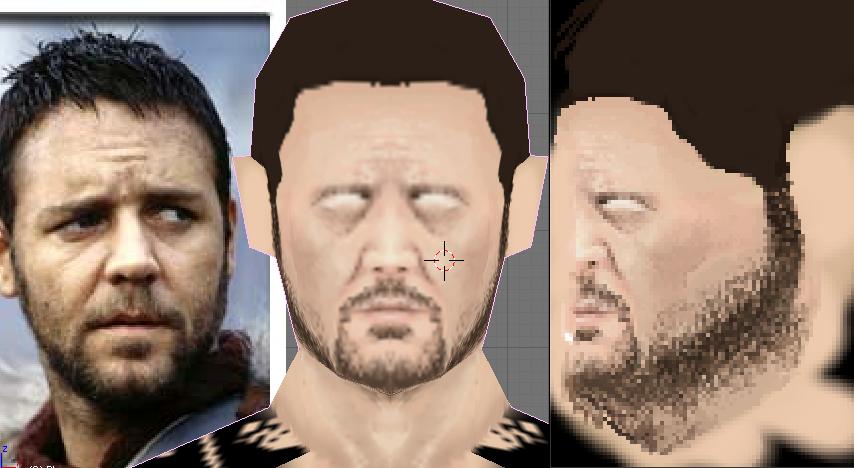 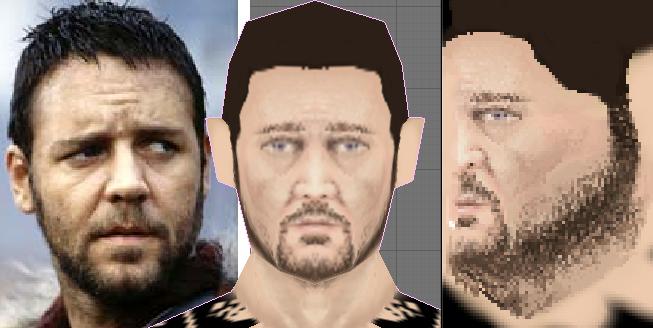 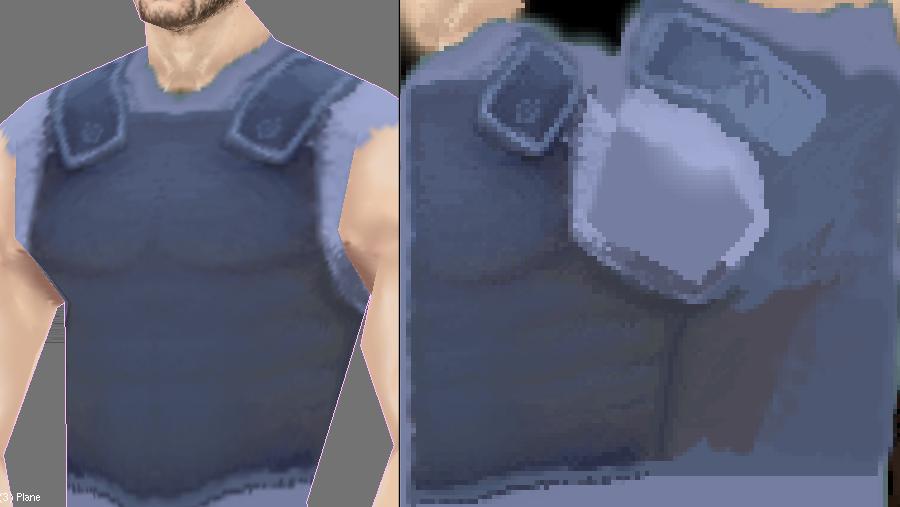 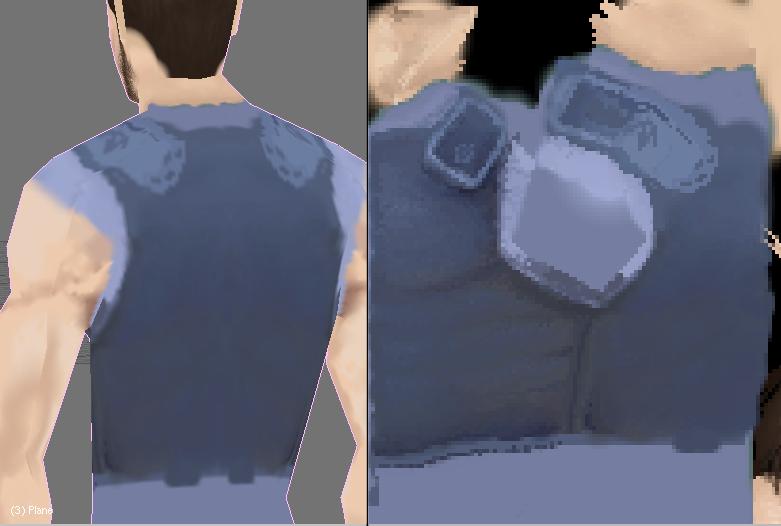 Im surprised nobody has commented, the textures look great.

you seem to be getting a lot of style out of very few faces and pixels, he’s looking great.
I’m curious to learn what the purpose of this model is - a Gladiator-Game?

Thanks for the comments guys

@Free: Texture takes me a crap ton of time. Usually about 20 hours so I’ve got to spread it out some. Texture paint is working very nicely for my 256 map. Texture paint is actually setup to be more mouse friendly than tablet so if you didn’t have a tablet I recomend it. So far about 98% of my time working on the texture has been in texture paint. Only when doing the hair did I feel it was time for a costum brush. But you can always load custom brushes and use them inside of texture paint. The day it gets layers, better accuracy, a good brush setup and proper tablet support I’ll sh** a brick and likely only use gimp for contrast, curve editing and the like.

Nope just for fun. The aim was “very best I could do … within reason… with the very least”. I’m really aiming for character likeness. I was hoping that the head might have been to the caliber were someone could tell who it was. But at a near second it might be good enough that if I say its russell crow then they’ll agree. This is a big step for me, since this is my third head and when compared to my first and second its much better. (not to mention its taken like twice to three times the amount of time) But when its done and you’re really happy with it is really rewarding.

I’ll probably rig him and pose him but nothing else. I’ll post a blend to give the model and rig out to any that want it. Since its in a persons likeness I would be responsible for how it was used soooo I’ll keep the texture to myself. Maybe this might become portfolio material if it turns out well enough (it fun to think big…). It would be a lonely piece. But like I said just practice and fun.

Wow. So much character and detail with so little verts and faces. This is really good.

I would more than love it if you made this specific model into a tutorial. I would love to see how you go through the process.

Looks tasty. That level of detail would be ideal for a Rome: Total War mod.

I’ve written a small tut on how I go about unwrapping a low poly: http://blenderartists.org/forum/showthread.php?t=84767

I sat around and consider trying to write a tutorial about the modeling, but I feel I don’t know enough about all the different facets to gaurantee the things that I would state. One of my bigger hang ups is knowing whether my joints are going to work out. Even with this model if you look there is little for the elbow to deform with I may still have to cut an addition loop there to give it the means to deform well. Same goes for the way I constructed the knee.

Before you posted I was thinking about how funny it would be to do a recording of me texturing because I knew what the perfect title for it would have been. “Texturing: The lost art of trial and error w/ Jesse” And trust me it wouldn’t be a quick .5-1.5 hour video.

So right now the only thing that I feel I can do reasonably well is actually in the one tutorial that I’ve written. There are some great video tuts on Ben Mathis website (I’ve watched these a couple of times). I think they are a great place to start.

http://www.poopinmymouth.com/tutorial/tutorial.htm (and he’s recently put two new ones up which I’m going to go take a look at now)

minor update more contast for the face and the armor is almost done just need to figure out a good way to get those horses and other things on there and look decent. 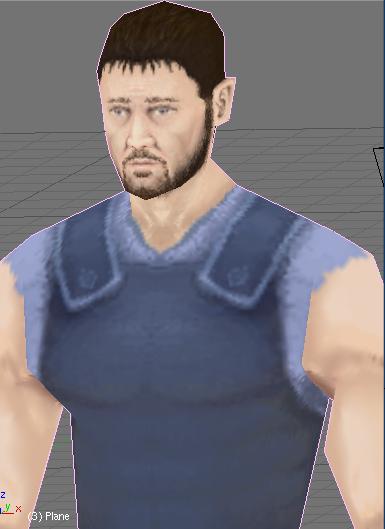 I like the head progress in the first post. between the last two you can’t tell what happens all that you know is its some how a hair better. When I see it in other people’s work I always stare at the damn thing thinking “stupid magic step”, because as far as I can tell nothing is different. But somehow its a smidge better. I think I took my first magic step.

Do his joints and neck and things have enough loops to bend properly?

And have you shown the non-tri wires - or did u model him in quads or tris or?:spin:

he’s a mix of tri’s and quads. I don’t honestly know about the joints, But I wouldn’t ask anything too demanding from the head. I may need to cut some additional loops in a couple of spots and if so it will be a fun experience. I think just using proper pins I’ll be able to get them into the map, atleast I hope so.

Not knowing if the limbs would deform was kind of the reason I modeled him in this pose instead of the T pose. This way he’ll still “look” cool whether I rig or not.

And its good to see you’re back kicking it around the boards again.

oh wow you remember me - thanks

i remember you too =)

those joints are going to only be a pain in the ass if you don’t fix them soon. They should have 3 edges for each joint I think and also they should look more like rings or bands that they are wearing around their limbs

Yep this was about the best I could do with what I had for the elbow. Going to need an addition loop or two. I think I’ll sacrafice some thinning of the forearm. I’ll only add one vert at the base of the bicep. I think that will give me the most bang for my buck. I’ve got enough around the shoulder to do a decent setup. I’ll check the knee after breakfast. Makes me glad I haven’t spent any real time on the arms

edit I went with the one vert and a loop for the forearm so I could keep it atleast a little volume(esque). The knee bends well surprisingly. 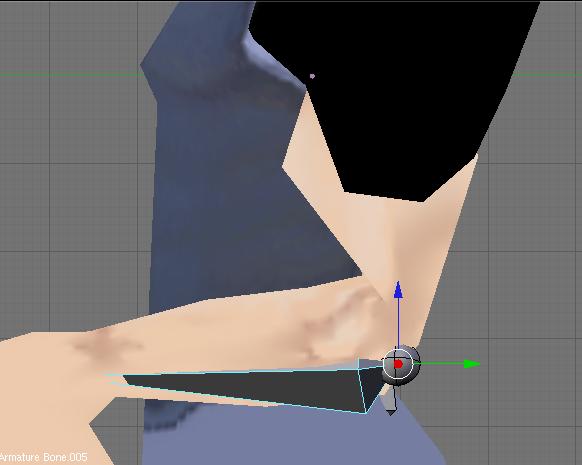 This is about it for the arm. I still need to take the first strap and jam in onto this contrasted arm. The add contrasted gives it a more fleshy feel. But it destroyed the wrist band. 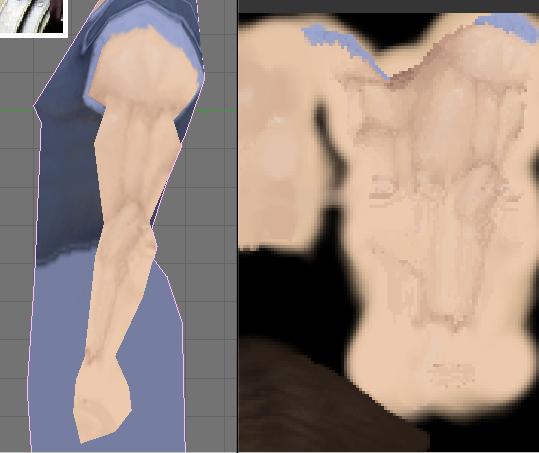 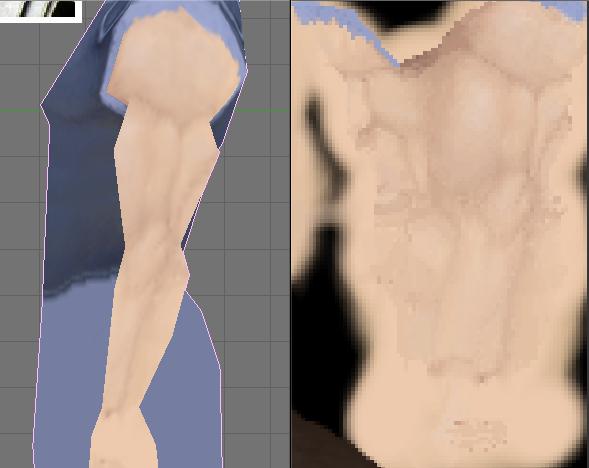 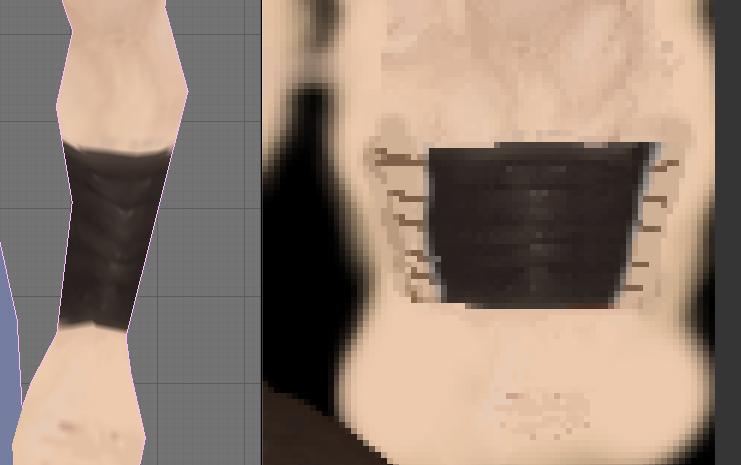 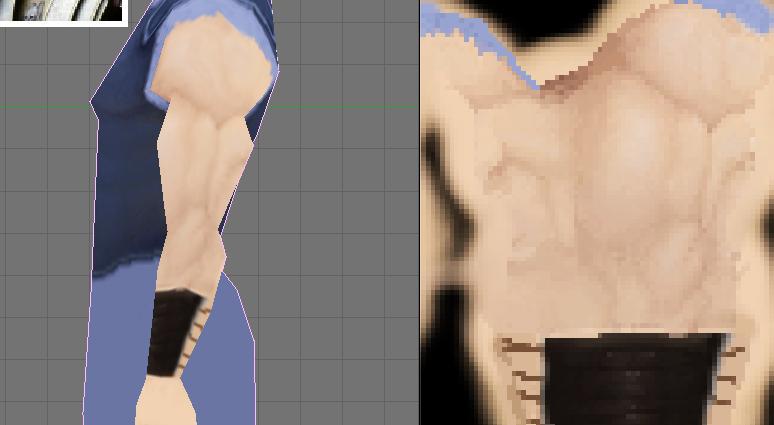 Your doing well. He looks fantastic. My name is Maximus…

holycrap! this is a great low poly model, texturing is fantastic. I’ll be watching this one.

Well heres a little update to the anatomy. I notice the most viewed thing is my lowpoly model wire shot so if your interested this one is far more appealing and correct. Lengthened the forearms and head, shortened the upper arm and shin lowered the buttock a smidge.

Note: the head needs to be about an inch wider, but I won’t take care of that till I’m finished texturing and apply the mirror. 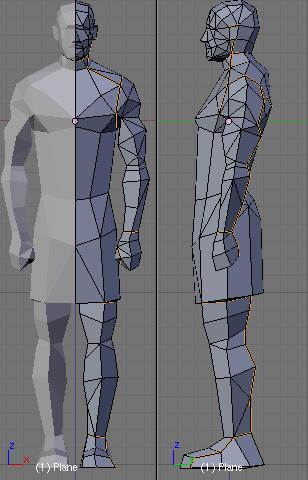 K, something just doesn’t feel right and I can’t quite put my finger on what causing it or how to fix it. Here’s the model up againsted loomis’s fig drawing. Everything is rougly where it needs to be but still things don’t feel like they are in place. Every time I paint a new patch the model seems to be thrown off.

I chucked in one with 75 heads I think this may be the one I go with. 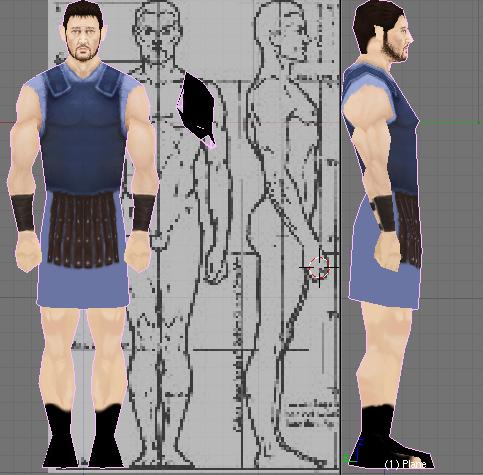 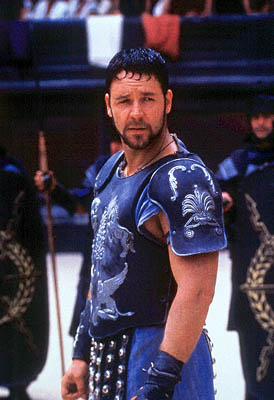 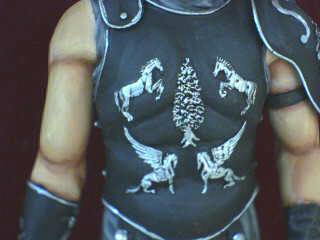 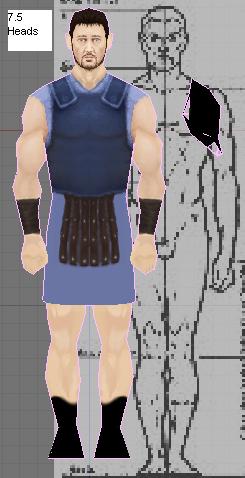 His torso looks like it might be too tall. The ‘perfect man’ reference you’re using almost never applies in real life. Also, the breast-plate has a dip in it.