when i’m playing around whit the radar sensor i run into some strange behavior, or am I misunderstanding this function?

how ever, lets say that i’m adding an Cube and gives it an Radar sensor, i set the sensor to 180 degrees and an distance of lets say 20, then i set it to detect an other Cube named “Player”. this works fine if i set the player cube in front of the Radar sensor, it is getting detected as long as it is within 20 units away, but no, if i move the player cube to the side of my radar ( still in sight for the detector) something goes wrong, the end distance (set to 20) do not Mather any more, even if i move the player 100 units away from the cube it is still getting detected. Is this suppose to happen or is something wrong here?

and is there any "Work around " for this problem?

If my explanation where ban I made an simple image to illustrat what i mean: 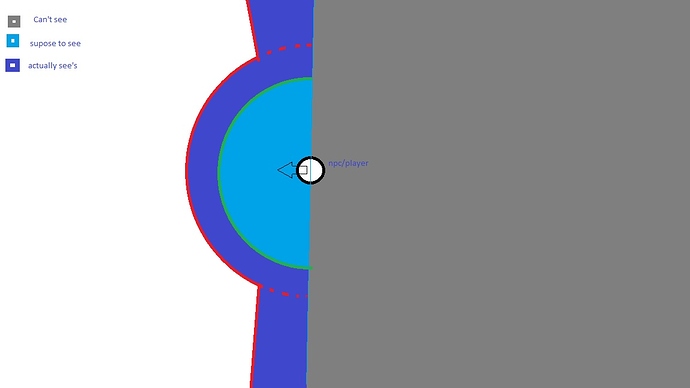 Have you got a blend that demonstrates this happening?

if you turn on ‘Show Physics Visualization’ from the Game menu you will be able to see the ‘cone’ of the radar. Make sure to have it on the correct axis.

okay, It might be me who have misunderstood the logic of the radar sensor, i where thinking that Distance always is the distance the object can detect, (the object being the center of an circle) not the edge of an cone

thx for the help