Usually, when I open the game and click start, It takes a while, around 10 seconds, with low fps to render every texture on the map. While the player is on that low fps state I manage to put a Loading screen in front of the camera and lock both player and camera movements with a timer of 10 seconds.

The login screen is a plane with a text object in the middle write “Loading…”, and there is a timer to play an Visibility actuator to set it and children to Invisible.

Problem:
Everything works well, until I realize that the low fps state persists forever now. Removing the plane in front of the camera seems to solve the problem.

I belive that there is something about making a object in front of the camera invisible forces blender to render everything again, but is only a theory.

I could do some workarounds, but I’m trying to minimize them. Any help?

If *removing* the plane restores the framerate, then it could be that you need to slap an occluder on it.

Also: on UPBGE 0.2.5 there’s this setting in camera properties, 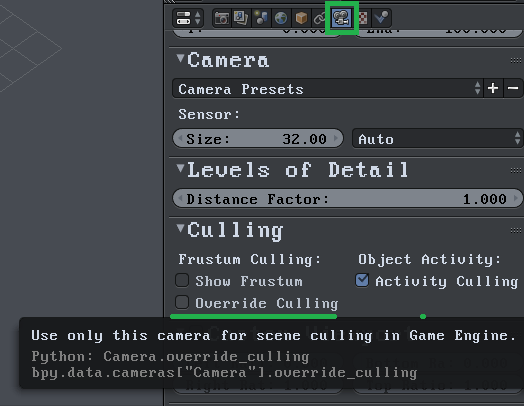 Which __could__ help if you have multiple cameras on the scene.

I vaguely remember having a similar issue when doing seamless interiors; having a wall between the camera and an object was making the engine cry. Toggling visibility didn’t help but occluders solved it for me.

Now, if an object is hidden then it shouldn’t burden the rasterizer. Unless it’s a lamp. The problem could be somewhere else and removing the plane is just some sort of placebo.

jumping frames per seconds standart problem bge/upbge, if before camera not vision objects and script or logic make objects visible fps fall, low fps it can be related to vsync, it is turned on as standard, you can make it adaptive and limit the frame rate to 60 frames, this method worked on my computer - before it, my fps was very unstable, it could be 60 frames or it could be 20 frames, and in the same scenes and with the same objects, delays can also be caused by adding highly polygonal objects from other layers, for example, when I add planets 5 planets of 450 thousand polygons each fps drops by 20-25 frames and nothing can be done about it, just enter custom LODs. Also, if you add new scenes to the game, whether it’s a loading screen scene, a scene with a player interface, a drop in fps for a few seconds will not be avoided - the easiest way out is to add such scenes as objects in iterations - according to the list or with delays

Well, I fixed this by instead of making it invisible to make its size to 0 with an Action actuator. Enabling Activity Culling on cameras doesn’t seems to solve the problem.