Hi…
this is my second post on tests…
in this one prove how fast are ur reactions if u can reach more then (Turbo-Charged Cheatah) then ur reactions are really fast i reached (Bobing bobcat)
So i think there are some ppl who can do more then me…lets go to the Test now…
this ones better then Ten-Fast-Fingers:cool::eyebrowlift:

Man, I would be getting cheetah if my mouse wouldn’t double click =P I get get four .1 secs, and one 3 sec =P

Yeah, my best is still bobcat…

rocketing rabbit, I think I could do better if i tried a couple more times.
edit Nope, that’s the highest I can get.

Yeah, I cannot get past Rocketing Rabbit either.

Hehe, so I’m quite slow but on this one attempt I fluke’d it big style. :eek:

I didn’t see anything move and the circled sheep didn’t show fully like it does in the picture until I’d hit the dart button. I hit it bang on 0.0 seconds!!! (Precognition at work)…

And then some Ying-Yang kicked in causing my last dart to be a 3-second fine. LMFAO!!! 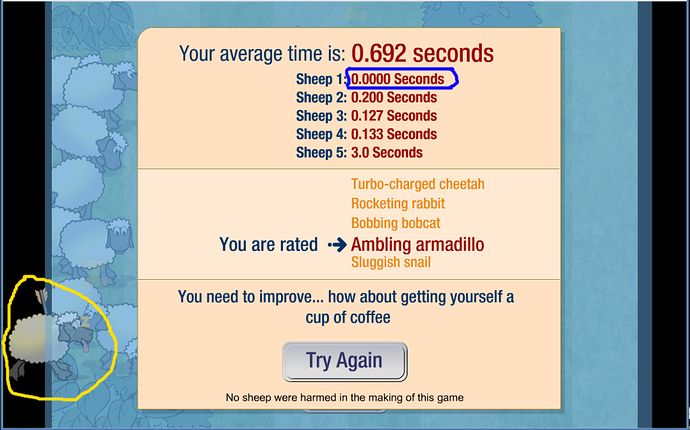 Ya, I got a 0 once, but I’m so in tune to movement I always fall for that flinching sheep in the middle giving myself a fat 3.

I beat you PolygoneUK ^^
Sheep3

I beat you PolygoneUK ^^
Sheep3

Well I know I’d be beaten on that attempt since I incurred a penalty :yes:. If you want to brag, you should note that I had three sheep times under 0.140 and one at exactly 0.200. If I hadn’t hit that damn 3-second penalty there’s every chance I could have maybe even reached the Cheetah level with that 0.0000 in the mix.

I’ve done other attempts and can reach “Rocketing Rabbit” pretty often, but that damn Cheetah skill level… oooft that’s a hard nut to crack :no:

Yeah I got Rocketing Rabbit!