Rendered in cycles, 1000 passes. Lit with a single light emitting sphere behind the flame.
Thanks in advance for any and all comments.
Els 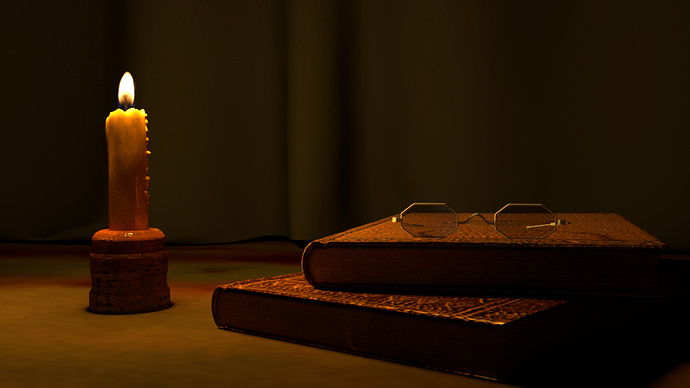 Nicely done! I wanna know more about the candle.

I think texturing might use some improvements (floor, curtain, book covers, but mainly the floor) , but lovely atmosphere. I’m not so educated about great object placement (composition), but looks ok to me, only I think that the glasses would look better if they wouldn’t face towards the camera.

Also, I think that the picture would overally improve if the glasses would be some oldschool round Lenon style glasses instead of these, but that’s just my opinion.

Thanks guys for the comments.
Downfall, I tried changing the glasses angle but doing so only (for some reason I couldn’t figure out) gave the lenses a flat black non translucent appearance, so I was sorta stuck with that angle. The glasses themselves are modeled after a pair I own. I bought them in high school (dating myself here) because they are “Ben Franklin” and Roger McGuinn and the Byrds were at their peak. McGuinn wore a trademark pair. Of course back then they were called Granny Glasses. At any rate, I did some research a few years ago as the case has the optometrist’s name and city on it. Apparently the were made between a1870 and 1876. Any way I guess that’s enough over share on those.
Silver Moon, what can I tell you about the candle. It is really no more than a cylinder with displacement modifier and a few meta balls as dripping wax. The flame was added post-production in Gimp.
Els