Real 3D in a game without 3D glasses with a normal monitor!*fixed file*

Real 3D effect
I don’t know if this is the first time this is done, but I couldn’t find it on google. (I found 3D monitors, but not this)

Anyway, I have before been trying to get a “real 3D”-effect in games just as they are, without having to buy 3D glasses for something that you might only do once for fun. Though that time I failed. However now I figured out a way to do it. With the help of socials template and an old dual viewport-script, (that I’ve remade too many times to remember who made it. Sorry… :o) I put together a playable example of it. The technique can be used in almost any game I can think of without any trouble.

The idea is that you have two cameras where one either moved a tiny bit to the right or left. DON’T spin it instead, it apparently doesn’t work! Now set up two viewports with the cameras next to each other with a script and that’s it! (remember to put the camera that is to the right to the left, since you’re crosseyed, the right eye will look at the left window)

Now to the part where you see the 3D. It’s actually rather easy to explain but maybe hard for some to do. The only thing you do is to cross the eyes so the two images mix together in the center in a combined 3D image between the two images.

NOTE!: The smaller the viewports are and the further away you are from the screen the better. Try to lean back as far as you can. Because being too close to the screen or having a too big window without backing away puts strain on the eyes. (it makes you have to cross your eyes more which feels bad)
Also this is maybe a way to make a real 3D effect, and it’s great, but in the long run I think it should be use only for what I made it for in the first place: Short games or tests or something that you only do once. Because you shouldn’t cross your eyes too much.

Here’s my file! (Puh, that was close to exceeding the max size)

EDIT: Really sorry but the previous example didn’t work. I made a major mistake when I swapped from my first test to socials template. I’ve now fixed this, but with the result of having to remove the gun, because it was too small.

EDIT2: Added images. One is a working 3D image from the game and the other tells what you should see. (probably not neccesary) 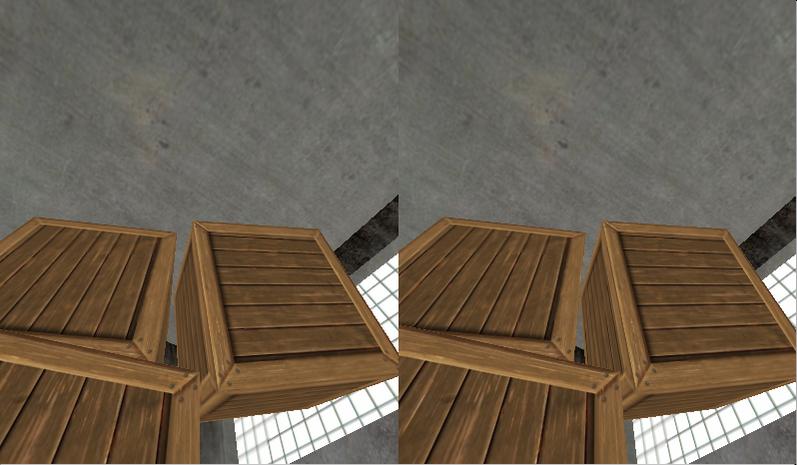 i dont see any difference

Hmm… I like red/blue 3D better, as I’ve never been able to get these to work without appearing blurry. :^/

I’ve developed a sort of talent for seeing these things in sharp detail , and this one does look good.
BUT, it hurts the eyes after only 10 or so seconds. Anaglyph or (even better, polarized) 3D glasses are the way to go if you want 3D in games.

Or no glasses at all and a viewport modification that even cs 1.6 can manage…

Ya know, the easy way to do this is to go to the Scene Buttons > Format > Game Framing Settings > Side By Side.

Although it does distort it a little…

Have a look at this:

Argh XD Beat me to it

Have a look at this:
http://www.youtube.com/watch?v=Jd3-eiid-Uw

I can’t imagine how funny I must look attempting to see this 3d sitting in front of my computer screen all alone in my room cross eyed.

I’ve developed a sort of talent for seeing these things in sharp detail , and this one does look good.
BUT, it hurts the eyes after only 10 or so seconds. Anaglyph or (even better, polarized) 3D glasses are the way to go if you want 3D in games.

Ok, try sitting a bit further away then or make the game-window smaller.

wow that was impressive video… that guy is hired

I lasted 5 seconds before head pain

Sorry, but I just realized I made a giant mistake, because I assumed you could spin instead of moving, but apparantly didn’t work. Sorry, I’ll post a working blend soon.:o I should have used my original one. AW!

OMG!!! WOW, it worked so well, i just watched G-force in 3d with the glasses and its pretty much the same 3dness.

That was why I really wanted to show it.

So you HAVE been up tp something all along!
nice stuff!

Actually not, I made this two days ago and hadn’t touched Blender for a while before that. =/