I was wondering, I am studying now about camera composition (rule of 3rds) because I noticed I only model in perspective or ortho but never really made a scene before with different sizes of objects.

I was wondering, I know some people say you dont need to model to real world scale but the objects still have to have some scale truth to it. For an example, if I model from a reference image, it could be a house, landscape etc. you can make everything look good but…

what I am getting confused on which I do plan to learn focal length to to help with this is, when you model from a reference image, lets say you block out a landscape in Photoshop, illustrator or whatever. and model it in top orth.
after you model it, it may be to small for the other objects like a tree, house etc. wouldn’t scaling up the landscape cause issues in detail , among with other things?

by this… I mean say a hill. a hill or small dune could be like 6" tall
but once you scale it up it can be like mountain to other objects or not exactly what you want since the detail and scaling would be different?

I know focal length of a camera helps by what you want to be scene close up or not in your render scene but i figured this would cause scaling issues too if I have the wrong focal point too correct?

I was thinking of putting something in my scene that will represent real world scale say a person, then change the grid settings to say yards or miles. but I am not sure how I could model a landscape to that unless I use it as distance and height of the landscape. 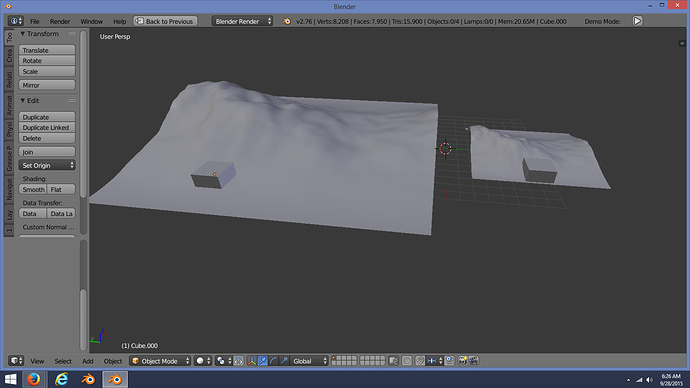 I always use real world scale (and set Blender to metric). It just makes the modelling easier, in my view. Once the modelling is done (at least blocked out), then I sort out the camera stuff.

I also use as close to real world scale as possible, as with BiggR I set my units to metric and operate in that manner. The only key point to remember is, if you are scaling your objects to a specific dimension in Object mode, ensure you always use CTRL+A and set your scale after you are done so whilst at the correct dimension, Blender sees the item as 1,1,1 scale. Otherwise things can go kablooey.

thanks, I downloaded google earth and I didnt know it can help measure your buildings, give the elevation on the land