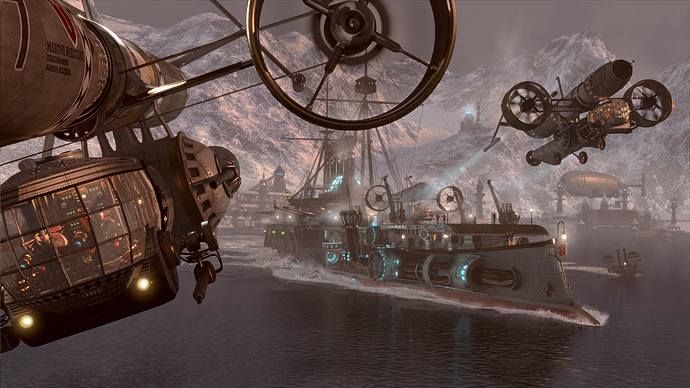 There was a titanic shove as the steam catapult launched the Pilatus into the frozen air.Holmes briefly regretted the substantial rosti he had eaten for breakfast on the mess deck of the Admiral Bronstatt earlier that morning.
The whine of the turbine increased as the aircraft banked around the great warship. Neutral the Swiss might be, but the Bronstatt’s guns were aimed resolutely at the French shore line.
" Where to Mr. Holmes?" The young pilot was inscrutable behind mirrored sunglasses.
" I need you to fly me to Meiringen in the Haslital."

Watson at least was safely out of the way, being ensconced with the Latvian ambassador. The Baltic states were up in arms about the latest incident with a Russian submarine; the crew had been rescued but somehow it had managed to sink inside the port of Riga and the Latvian authorities wanted to know what it was doing there, as indeed did the Imperial Canadian Secret Service.

Therefore, with Watson otherwise engaged, Holmes was able to follow his latest lead without distractions. He had information that Moriarty had been sighted somewhere in the Berner Oberland and he was damn well going to find him this time.
Subsequently it had been useful for him to be able to call in some favours from the Swiss Fleet Air Arm.

As the aircraft levelled out, Holmes raised his telescope and surveyed the distant shoreline.
“What do you think the French are up to?” he asked the pilot.
“Who can say?” the other man replied. “They have opened a whole lot of new mines along the border, but they aren’t going to find anything there. They could try something more overt but I
doubt they will, as they know they are no match for the Swiss navy.”
There was pride in the pilot’s voice. He laughed.
" Look around you, Mr. Holmes,” he said, “You are sitting in a Pilatus A340, the most advanced aircraft in the civilised world, the product of Swiss ingenuity and engineering. I can cruise at up to 300 knots for anything up to a month, my turbines are powered by the latest Triphasic Hydronium reactor, and I am held aloft by an envelope containing Mononeucleic Substrate of Helium. My only limitation is water, which I can pick up from any of the lakes by using a retractable scoop. I have a down-looking Doppler Sonar, and any tactical information I require is provided by a Telecalculograph made by Breitlings of Zurich. How do you think the French, with their petrol powered toys made of canvas and string, would fare against the likes of this?”
Holmes put down his telescope and looked at the pilot.
“You’ve lived here most of your life,” he said “Yet there is something in your accent that tells me that you were not born here.”
“You can tell?” The young man was surprised. “You have a reputation Mr. Holmes, but I have been a Swiss citizen since my very earliest years.”
Holmes studied the horizon. “It is only faint, but there is a different kind of German underlying your speech,” He paused. “I remember hearing it once in Prussia and lower Silesia. I would say that you were born in Breslau.”
“Astonishing!” said the other. “You are not quite right, I was actually born in Kleinburg, a few kilometres from Breslau. When I was a small boy, my mother fled before the French invasion
and came here to Switzerland. My father died fighting the French.”
Holmes laughed. “And now against you, and the Alps, and the Swiss Federation, the Emperor has come up against a brick wall!”
“It is interesting,” the pilot replied. “We were having a conversation on the mess deck the other day concerning how our entire existence might turn upon a single event! What, for example, might have happened if Caesar had not been assasinated? What if Columbus had not reached the Americas? Indeed, what if Napolean had lost at Waterloo?”
Holmes began to feel irritated.
“For a start, the French flag would not be flying over Buckingham palace, and I would not have to live in Canada!”
He turned his head and surveyed the Alps as they passed beneath the belly of the Pilatus; he seemed lost in thought.
“What is your name sir?” he asked, presently.
“Manfred Albrecht Freiherr Von Richthofen,” replied the other. “It’s strange, to think that in another life I would have been part of the Prussian nobility! What about you Mr. Holmes?"

An uncomfortable feeling gripped Holmes, as if someone had been walking over his grave.
“In such a world, I doubt I would even have existed.” he said.

This is my entry for the Blenderguru steampunk competition, the story is a little extra to give a some background
(and have a bit of fun), and I am indebted to my partner Cathy for her help, in the writing.
The picture was created in Blender, also using Makehuman for the figures, and with a small amount of postprocessing in photoshop. Many thanks to everyone for their comments and support on the work in progress thread, and lastly, may the best person win!

Hey man, congratulations! :DLove the history and all the idea. Hope you make more impressive works in the future;)

Hey man, congratulations! :DLove the history and all the idea. Hope you make more impressive works in the future;)

5 stars from me mate

I planned it from the beginning, although in the original version Queen Victoria married the son of sitting bull after prince Albert was assassinated by the wicked French

let’s hope none of the judges are french lol

I have some very good friends in France (honest), in fact I think that a Gallic sense of humour could probably deal with this, and just shrug it off. The idea came about because of the 200th anniversary of the battle of Waterloo being in the news recently. BTW. did you notice that your masterpiece got incorporated into my alternate universe?

Haha, i just noticed now. I honestly only skimmed through the story at first.

After giving it a proper read i laughed a few times, and it really brought the image to life. You not only have skill as an artist but you can tell the story to go with it

Thanks for the little reference in there mate, it brought a big smile to my face. Best of luck with the competition man, i honestly believe that you are one of the main contenders for the number 1 spot.

I really enjoyed reading the story, you should write more of this! Gripping atmosphere and a sense of something greater, and the picture is a perfect illustration to accompany it. Outstanding work!

It was very enjoyable watching your progress on this project, and I was surprised by all the work and details that went into it.

The final result really came out fantastic and the backstory just added a great finishing touch.

I wish you good luck in the contest.

why does this suddenly only have 3 stars?

Love the crazy detail and backstory!