I’m the codirector of a movie to be shot this summer, there will be a lot of green screen shooting, so we’ll need à lot of assets, mainly for the settings, and also for spaceships ! (yay spaceship !) the end of production date is unkown, the project may take a year or two to be completed but the sooner we have the assets the faster the film can be finished, that’s why I’m asking for help in the early stage of the writing.

Let me introduce the project first, then I’ll go further in details with our needs and working conditions.

Right now the project is in the writing, as mentionned we have set our shooting session in this summer, so it’s a live action film, involving lot of cgi. The story takes place 5 centuries in the futur, humanity is united in a single space-faring civilisation. It is discovered that there is a wormhole in our solar system for a very long time it is the planet 9 that we look for nowadays. After having sent probes trhough the wormhole it is determined that getting through it would be compatible with the integrity of living organism.

It is then decided to send a team of six humans to the wormhole and make contact with the civilisation that created it. As one can imagine : once in place, things don’t go as planned, the spaceship is stuck in orbit, people try to lose their memory, and something is not quite well regarding some secret directive of the mission given to the AI.

The story itself is set to be considered as realistic as possible (we are currently working with astrophycisists for that matter) so it’s a very serious project, even if we have close to zero budget. To be clear, no one involved would be paid, nontheless it’s an ambitious project, and even if I have the skills to put everything together, receiveing assetts for our project would reduce the time of the making. We need pationate people that are willing to give awy assets, every one involved will be properly credited for their work off course.

It is important to note that for some assets there will be less freedom of conception of others due to the fact we want things to be physically accurate !

The major parts of the movie will take place in a space ship, that would be built according to realistic prospects, I’m working on the general design, but I figured if someone better skilled than me would work on the details it would enhance the project. Also assets for the rooms of the spaceships would be appreciated.

There will be several types of space base set on different object of the solar system, such as Encelade, Europe, Mars and the moon, for this interior and exterior design would be needed.

And as for some scenes taking place on earth we will need good design for buildings, citys that are futurist in an eco friendly style (vegetation every where, fruit trees on the streets and such) So we will need of kind of assetts, you may deliver only plants or simple objects of you conception, or be more ambitious and do bigger things. We may see auto driven cabs and drones and so on.

If ever you allready have assets that you think may correspond to our needs, feel free to send them to me, if you have any questions feel free to contact me.

Please note that for most parts it’ll be more a collaborative work with me (and maybe other people) and under my direction (I’m a nice guy), so I may have to ask for specific details.

I’m working on a project of webcomic set on an exoplanet colony, there ought to be an overlap in the designs we need. I can share some assets if you don’t mind them not being exclusive to your movie, and attribute them on the site so I have something to point at if some of your fans find my comic and think I stole them. That includes a handful of trees and plants, since apparently you’ll need a lot of them. I wouldn’t mind a trade for some of your assets while we’re at it, it’s incredible the number of objects it takes to make a building look inhabited!
My comic is not in a hyperrealistic style though. Not cartoony either, but it’s not trying to pass for pictures, and very few image textures are used. So it depends on whether this fits in your vision. I can post a few quick renders if you wish to see more.

Yes go ahead and send me your renders, even if your assets are not photo realistics, I can stil work on it, and I’m all ok to share some other assets with you, (I’ve got some really good looking procedural textures, and blends from my previous movie, Id’be glad to share) I’m new to this forum, maybe we can share work through private message to not flood the thread ?

In case it went unnoticed, I did reply via PM yesterday.

For an example of the models I think you might be interested in, below is a greenhouse dedicated to breeding pollinators. Those flowers aren’t very detailed (that scene is a ~40 seconds render, on a poor old laptop) but I find the effect they create together satisfying. 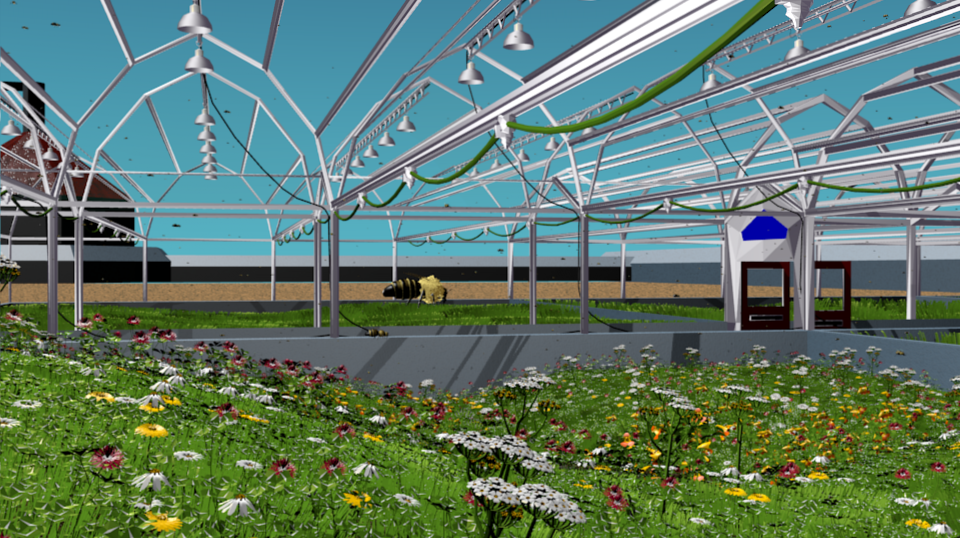 With the holidays I’ve been a bit busy, I’ll comeback in PM as soon as I’ve got time to do so, I’ve checked your work, it’s intersting and we’ll need to discuss some things about it.

I have been out of modelling for a while but looking to get back into it again. Unfortunatley I do not have any previous work to show due to a number of failed HDD’s but if you have anything that you would like me to look into (small is good) I will be happy to contribute to this project.

Yeah, well, We need all sorts of things, from little cleaning robots to vegetals any futuristic looking appliance, mostly the one thing that is required is it to be “renderable” in cycles, may be we could discuss this further in private message ?