Well, the title speaks for it self. A little project, something I’ve wanted to do for ages, which I started last week. Not that I’m some avid researcher of WW 1 or anything, but mainly I wanted to do this because Manfred Von Richthofen, or Red Baron as he’s better known as, has turned into a sort of modern day mythical character because of what he was: one of the best known aviators of his own era. And not to mention his legendary death. 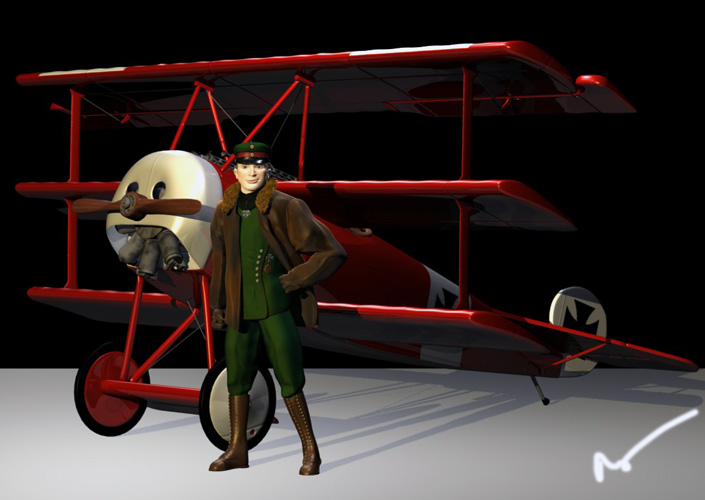 Good job, but it looks very, very miniature to me, like a scale model kit. The smarmy half-grin is kinda cool, but I’d expect him to be a bit more menacing-looking.

That’s very nice, how did he die again. (I can’t believe I don’t know this.)

Well, the more romanticed version goes, that his plane was shot full of holes, yet only one managed to hit him. And even that had the courtesey to pierce his heart.

The thing is though, that no one knows for sure who was the one who fired the fatal shot.

Here’s the wikipedia tidbit of the actual event:

Richthofen was killed just after 11 a.m. on 21 April 1918, while flying over Morlancourt Ridge, near the Somme River.

49°56′0.60″N, 2°32′43.71″E
At the time, the Baron had been pursuing (at very low altitude) a Sopwith Camel piloted by a novice Canadian pilot, Lieutenant Wilfrid “Wop” May of No. 209 Squadron, Royal Air Force. In turn, the Baron was spotted and briefly attacked by a Camel piloted by a school friend (and flight Commander) of May, Canadian Captain Arthur “Roy” Brown, who had to dive steeply at very high speed to intervene, and then had to climb steeply to avoid hitting the ground. Richthofen turned to avoid this attack, and then resumed his pursuit of May.

It was almost certainly during this final stage in Richthofen’s pursuit of May that he was hit by a single .303 bullet, which caused such severe damage to his heart and lungs that it must have produced a very speedy death. In the last seconds of his life, he managed to make a hasty but controlled landing in a field on a hill near the Bray-Corbie road, just north of the village of Vaux-sur-Somme, in a sector controlled by the Australian Imperial Force (AIF). One witness, Gunner George Ridgway, stated that when he and other Australian soldiers reached the aircraft, Richthofen was still alive but died moments later. Another eye witness, Sgt Ted Smout of the Australian Medical Corps, reported that Richthofen’s last word was “kaputt” (“finished”) immediately before he died.
.

Sweet. You think about using a blur node?

Yeah, I was thinking of using blur on the background.

Chipmasque: I don’t want to make him look like menacing.

Waxed Moustache! You know he deserves one.
Actually I’d say the cheesy smirk is right on.

From what I can see, the aircraft is a bit off, both in shape and material. The entire aircraft looks like a die cast metal aircraft. Keep in mind that these kites were nothing more than stitched up fabric. Also, the shape of the aircraft is much too round. The edges on top and bottom should be rectangular, and, from what I can see, you made it graft into a circular shape from a smoothed, semi rectangular one. In reality, there would be a visible cowling fairing going from the back of the cowling back along the fuselage. Maybe you could post some more renders at different angles? Good job, though. Nice to see more WWI stuff around here. Cheers,

Thanks from the comments Bigglesworth. The pics of Fokker dr1 I based the plane on seem to be pretty metallic to me, so that was the material I went along with, tough the plane does in reality have some harder edges on its back side.

But any way, here’s an update of what I’m planning with this one. I’m planning to do a more of a poster kind of a pic. And I threw in the wires for the Fokker as well. 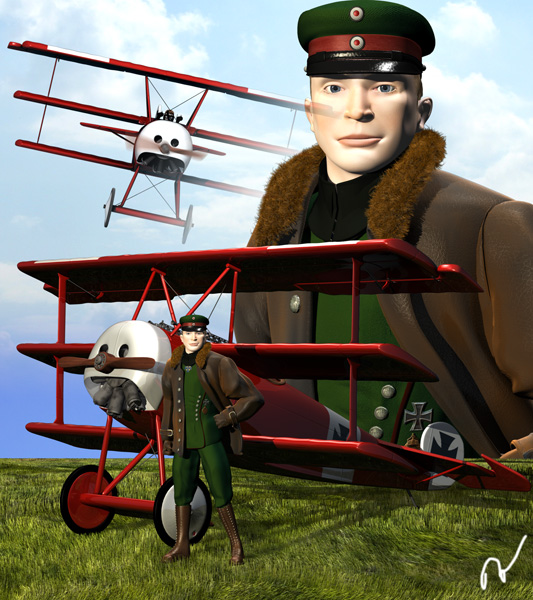 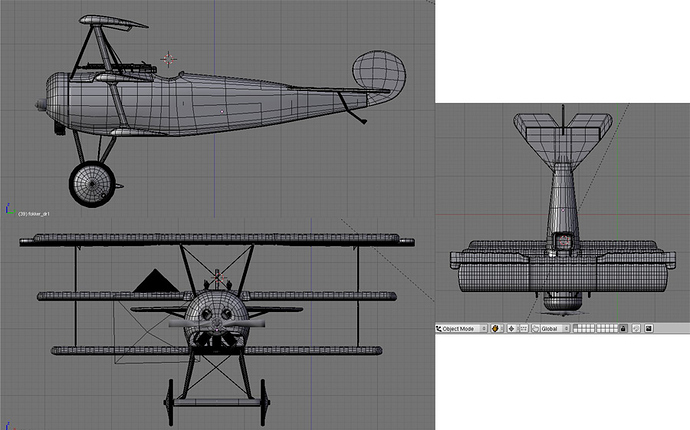