Well, figured it was about time to update the reel as I’ve been working on some interesting projects since the last one. I started to think about presentation and came up with the idea of a ‘projector room’ which would load the various models.

It’s probably over the top as a background goes - but, in and of itself it is another modelling piece to show off. I know that most of the renders are dark, that is intentional. Was going for moody and figured a dark background against well lit models would help the contrast.

However, now that I’ve done a clean white one, I quite like it too. But it is a heap more distracting.

As far as the current ‘quality’ of the images, they are all just post-pro effects off the one jpeg render, so the final will be much clearer. 7min to render one frame at 50% hd, but they are repeating sections, so rendering the room as slightly rotating would be an option as they loop would be continuous.

If it doesn’t end up in my reel, I’d like to use it for something. Don’t know what yet. 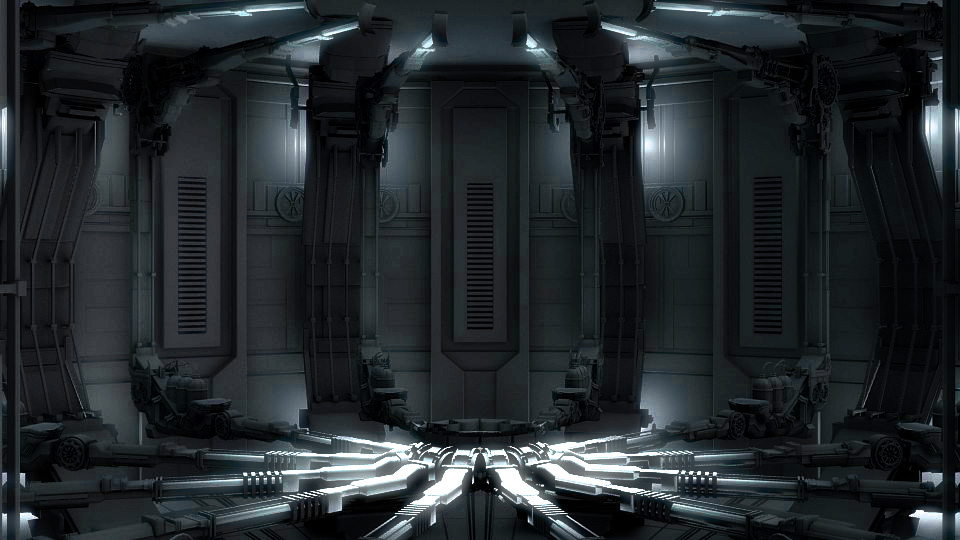 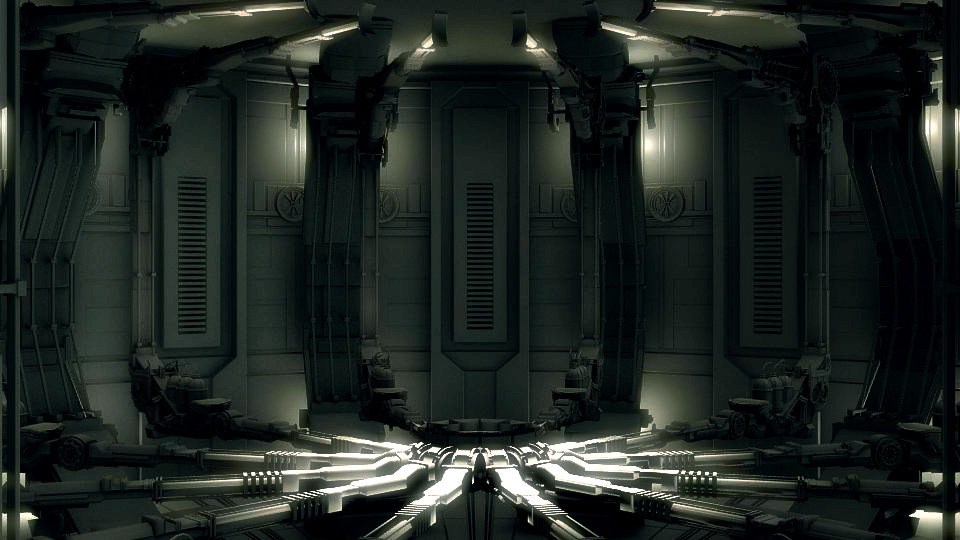 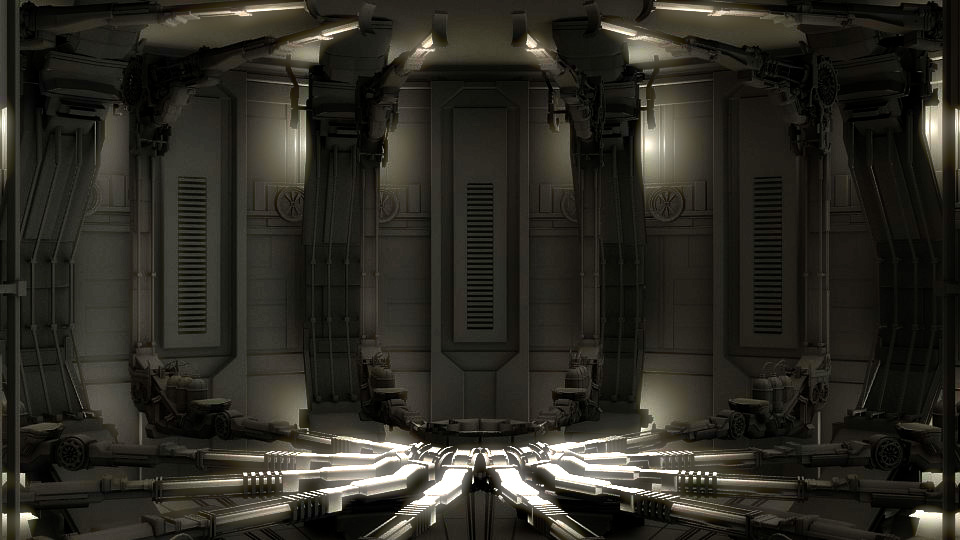 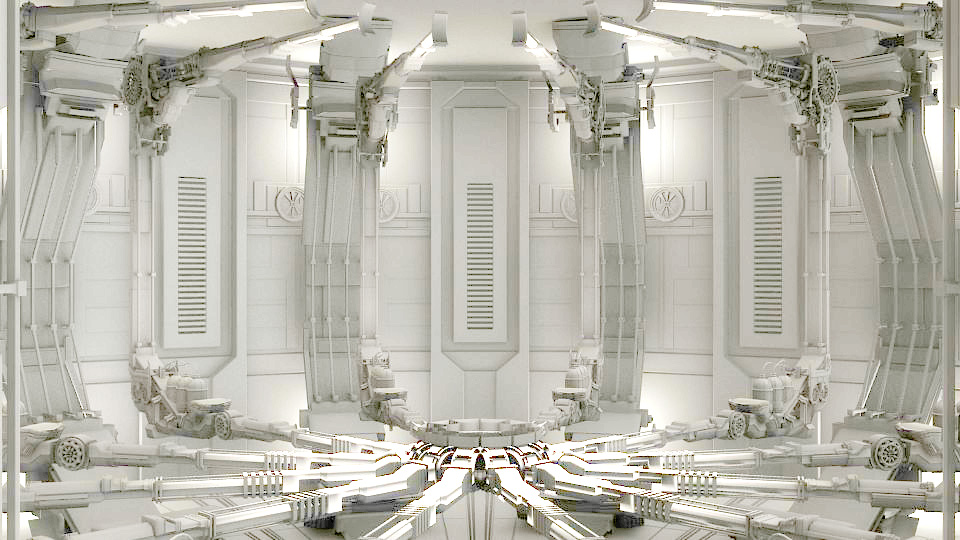 Looks like something from a Star Wars set. awesome

You literally have no right to make a room so freaking amazing. Dude, good job.

Insanely cool! I like the last light setup the best, probably because it makes me think of the first Alien movie for some reason. Excellent!

zanz - well, as a fan, it probable comes out in my work by default to some degree…

Romeo - cheers. The clean white one is growing on me the more I look at it. I love the lighting in Alien (as well as the movie in general). I’ll probably watch it now for ideas. Assuming I ‘make’ the time.

Bigglesworth - Well, truth be told, most of the geometry was made for another project, I’ve stripped it down and rearranged it into room form. There is more detail I want to add still, but I can’t get carried away if I use this as a background. That and it is around 3 million poly already. As per your message:

The AO is set to ‘Add,’ a value of 0.2 and a hdri map is applied to the world settings using ‘Ang Map’ and Hori - with ‘real’ horizon selected. Raytraced AO as it doesn’t work for AAO.

(on second thoughts - this is quicker.)

Got the map from turbo squid. There are some neat ones there for pretty cheap. I use it for several things, I didn’t buy it just for a subtle effect in this project. The main thing that makes this look neat is the fact I put the samples up to 16 and was just patient. The ‘light’ render is simply a dark one with ‘levels’ used to adjust the brightness. Not bad for a drastic change on an 8bit jpg. Exr file would obviously have been better for that.

- larger cleaner render, this time without the light rings. Still the spotlight though. Subsurf on the geometry closer to the camera too, bringing it to around 4 million poly now.

Render took 20 minutes, did a bit of a doodle while I was waiting. This is as far as I got, but I think I may finish this one into a final concept. I don’t have time to model it though, and if I did, I’ve made myself a rule that if I ever get around to making a sci fi short film that it won’t contain jedi. There are enough of those shorts out there, some of them quite entertaining, but many just feel like ‘some dude with a saber’.

I like where the drawing is heading though, so if anyone wants dibs on modelling it once I’ve finished, go for it. 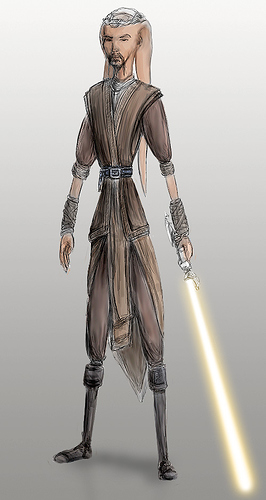 And one more large render for luck - I think this is now my favourite.

Hey I recognize part of that

Really nice work buddy, this will make a great addition to your reel. If you’re going to use it as the background/base for your reel I hope you animate it!

Yeah, thought you might. I figured if I had that geometry lying around… I reckon I will try and animate it. Once again the weekend has filled quicker than I thought, but will still try to get this out the way “soon.”

I really like the first render (original post) and the white renders. I also have to agree with zanz and bigglesworth.

I like the sketch of the character. I like the design of the saber, although as my sister pointed out…there’s no yellow sabers.

xray51493 - thanks for the comments. It’s a bit off topic, but if you really want to ‘go there’ - http://en.wikipedia.org/wiki/Lightsaber

Anyway, hope to get some sort of actual update to the Reel Room next time I post. Sorry about all the filler.

I never said I wanted to go “there” :rolleyes:, but I guess you are right. I didn’t intend to make this go off topic…so back on topic…

Excellent work. As is usually your standard.And it is also great idea to use such a reel room to present your models.

I like the last version best, because it enables people really to focus on the model and it is also light enough for noticing all details of your models.