Regarding the visual representation of selected objects

After fully transitioning to Blender over the last few months or so (big thanks to anyone who helped along the way in my previous threads BTW !) there is still one seemingly minor thing that bugs me and actually slows down my workflow, and I would like to collect suggestions and workarounds for it in this thread. I briefly asked about it in an earlier thread but would like to go more in-depth here.

The topic is the visual representation of selected objects, as shown here :

As you can see, for the sake of visual clarity I keep all my objects set as non-wireframe+solid (which I assume is what most users are doing) ; however when it comes to selected objects I would like to have further visual feedback than just an outline. There are two reasons for that :

1 - This would allow me to quickly review the topology of an object without having to toggle Edit mode, or the global wireframe display of the scene (which is see-through anyways, which is great for selection but not useful for review), or the per-object wireframe display option.

2 - This would allow me to make more precise selections when multiple visually overlapping objects are involved, as at the moment a large object cancels out the visual selection feedback of any smaller object placed in front of it. (Imagine the scenario of a large bowl-shaped object with two small spheres placed in it. In such a scenario there is no way to know if all of the three objects are properly selected by looking at the outlines alones, and that is a UX problem.)

Let me know what you think, and please share any workarounds you know about ! It seems like a small detail but it actually has some rather big consequences in terms of workflow efficiency. And ironically enough I feel like this would be a rather simple thing to implement, since there is already an option to toggle outline display on and off in the N-panel under Display : 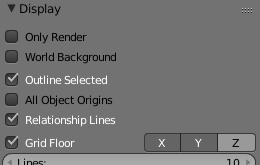 I could imagine one more option here, labelled “Wireframe Selected” - if I am not mistaken that’s all it would take to solve the two scenarios mentioned above.

Also on a related topic : is there a way to have Blender display the whole scene as solid+wireframe on top ? I like the current wireframe mode for some of my selection needs, but I sometimes need something like this : 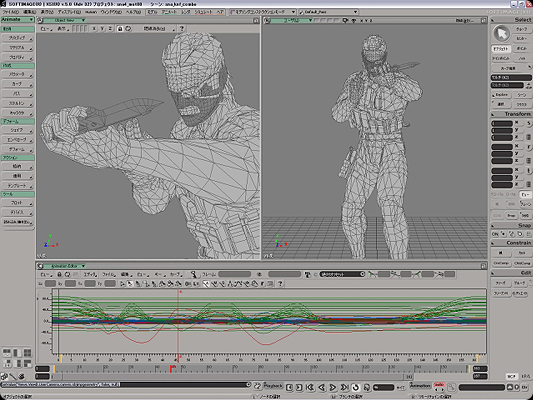 Note that I am not interested in changing the display properties of objects themselves. I mean it as a global display mode, similar to Wireframe/Solid/Texture currently available in Blender.

Thank you in advance for your help and suggestions !

since there is already an option to toggle outline display on and off.
You can assign a shortcut to toggle on/off object wireframe for the selected object. In this case Ctrl+W (need to disable the existing Ctrl+W shortcut for save blend file)

Hello Richard, thank you for the suggestion. While it doesn’t quite address the aforementioned issues (especially the problem with selection) this is still an interesting tool to have in one’s arsenal. What is it’s actual name in the input list ? I cannot find it by filtering by Key, as I probably unassigned anything related to ctrl-W already.

Ha, gotcha - that tells me that this is probably not an existing entry already established in the input list, but rather, a custom call to a useful function with no current UI or shortcut implementation. (I was indeed about to set it up manually like you did, but I thought I’d ask for an existing entry as it is more useful for new users potentially finding this thread).

I just tried it - this is indeed useful and will be a workaround for some of my issues, but I am still looking for more suggestions regarding a more global behavior as described.

[edit] Aw, unfortunately we are back to square one on this, as this display mode toggle seems to cause visual artefacts thus making it inappropriate for model review (as shown on the right) the plugin is already included in blender test build 2.75.2 can be found at
Plugin > click testing > search amaranth toolset

see if no visual glitches 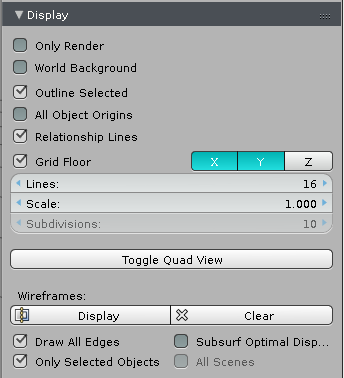 Hello Matsuiko, thank you for the suggestion !

I just tried it in 2.74 using version 1.0.2 of the toolset. While it does provide the option to turn on wireframe display for specific objects and the scene as a whole (without artefacts), this is effectively the same as using the Display Tools addon ; that is to say, it is not a dynamic effect

To be perfectly clear -

This is the way Blender currently operates (dynamic outline on selection) :

And this is a mockup of the option I am looking for (dynamic wireframe on selection) :

In passing, note that I am not claiming that the current outline representation is useless ; as a matter of fact there are many scenarios where I find it to be very handy. I am just searching for a way to alternate to another display mode, which has its own set of advantages.

I hope this makes sense !

my apologize they were the same plugin function as display tools

and valid only for the active ob not all selected ob

Matsuiko : probably yes … Well, at least we now know that there are at least 3 ways to manually (= not dynamically) display wireframe on objects as a setting : with the Display Tools addon / through a custom shortcut / and with the Amaranth toolset addon. So maybe this information will be useful to some ! This is not really related to the original topic of this thread, but this is still an interesting tangent.

Ricky : I don’t think that performance would be an issue if such a mode were to exist/be implemented. This is a very widespread feature in many software packages and there is almost never any performance hit because of it, even when a whole scene or multiple objects are displayed that way.

As a matter of fact when putting things in perspective by looking back at the evolution of software packages I would assume that the current outline display that Blender defaults to is a bit more complex to generate than a mere wireframe overlay since such a feature only started to appear recently, much later than the rather simple wireframe effect described in this thread. So, nothing to worry about here

That makes me wonder : what was the previous visual feedback on object selection in much older versions of Blender before the introduction of the outline ? Bounding box brackets maybe ?