I think I will call it finished for now;)

I hope everyone likes it.
The colouring may not be to everyones taste, but I actually quite like it.
The handle has been UV textured with an image made in photoshop, the image is of a piece of wood with a heart and an arrow scratched into it. (If you look carefully you can see the heart and the arrow at the bottom of the handle)
The image was rendered in Octane Render at 1600x1200 with a 6000 sample per pixel quality, rendered in 5 minutes. 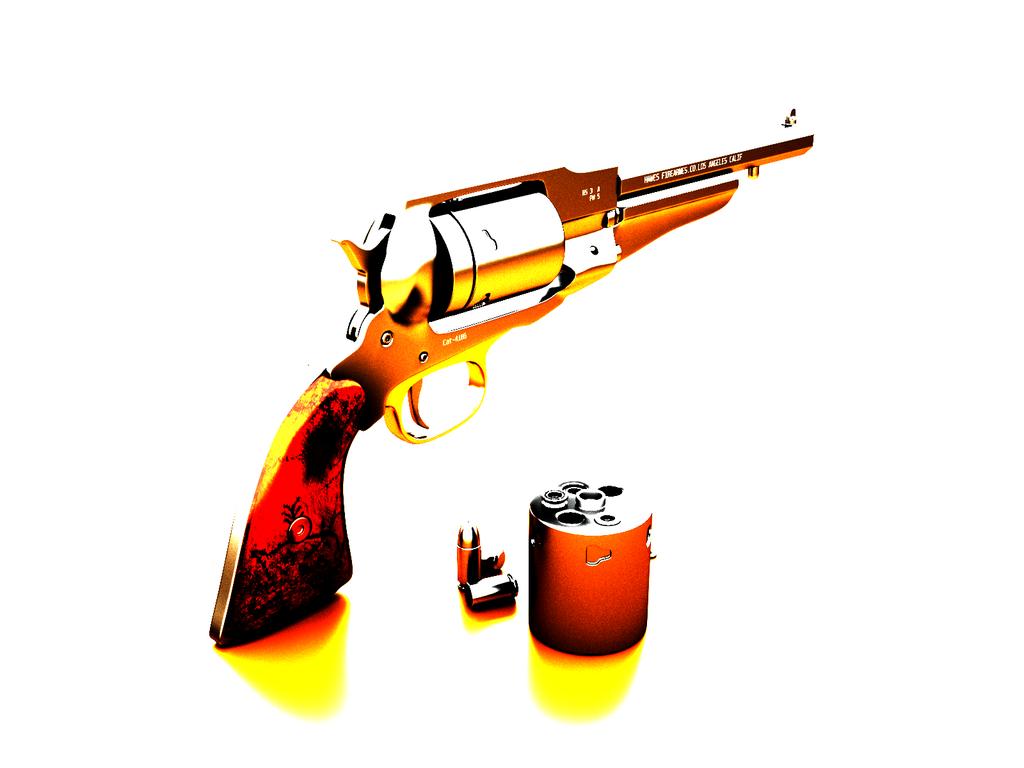 Tell me what you think?

It looks amazing! I like the coloring a lot. It reminds me of the old west or something. Very good work, I’m impressed!

It’s great to know that it has a certain wild-westish feel to it, that was my intention.

in the other thread you had some smashing renders, but what you’ve done in post has only made it less cool

The dramatic lighting does give a nice effect, but in this case I think it is a little too dramatic in a sense that a few parts of the model are so washed out that they blend into the white background.

Composition aside, the model is fantastic

Firstly thankyou for all the comments

Now…, reading over what you guys have said, it appears that this lighting isnt to everyones taste.
To remedy that, I took the liberty of creating a new render which hopefully looks better.
I also tweaked a few things as well as one major thing. Apparently the bullets I have been using are wrong! They are 9mm and this gun uses .44 magnum bullets.
So you may notice that there are now new bullets.
Rendered in 11 minutes and 43 seconds.

That is amazing in my opinion!

Looks very good. I like the materials especially. Great render!

The cartridges are too short, you are right. As I know, american revolvers use longer cartridges, so they have an increased fire power comparing to semiautomatic pistols or french revolvers.

Dude, the second one is amazing! I totally love it

What do you think of Octane? Is it worth it?

My gosh! so many kind comments

[email protected] Thanks for the info, I will re-render at some stage with the bullets resized, once again thankyou for pointing that out.

[email protected] In my opinion Octane render is one of the best renderers I have used, it’s fun, interactive and gives amazing results with little to no effort. The only problem currently faced with it is that it does not support the rendering of smoke and particle effects yet. Everything imported into octane has to be a mesh in some respect. Overall I would say that it is worth it though. Thanks too

looking good, great modeling, but i think having the gun standing like that takes away it’s high realism.
i know it might just be showcasing your model, but it would make it look better i think.
also, you could add a western background? maybe in a saloon or something?