I started doing this donut wanting to put on the sprinkles based on Andrew Price intro cycle tutorial. Anyway I finally was able to do the sprinkles using the particle system. That did work and once I put them into a group and onto the donut I wanted to delete those individual pieces but when I went to delete one of them it disappeared from the donut which I don’t want to happen.

I also tried to hide them or put them onto another layer but it all went including the donut.
Also when I did a test render the donut had a bright green light to it. 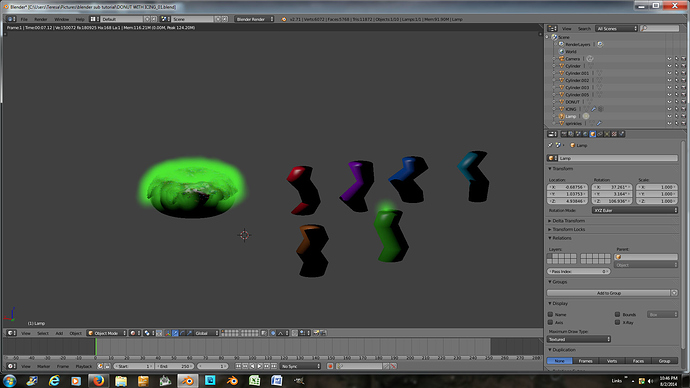 You are still in Blender internal render not Cycles and that green light comes from one Halo you see on green sprinkle.
Particles while Particle system is active can not be directly edited if it is Emitter type. You could use Hair particle system mode with zero particles and then use Particle Edit mode to Add individual (or some fixed amount) of sprinkle Objects you set to render instead of hair.
http://www.pasteall.org/blend/30806