Hi, so I have been using blender for about two months now and have done a few small projects, but I decided to try something alittle bigger. I took a simple spaceship that I had modeled during a tutorial and added some burner effects to it, as well as an animation of it shooting and blowing up an asteroid. I added a quick explode and a quick smoke modifier to the asteroid to make it blow up. I’ve never really worked with these effects before, so I’m unsure how they effect render times.
The part of the animation with the spaceship renders relatively quickly, however any frame with the asteroid in it takes AT LEAST two hours to render, and doesn’t seem to have the material I added to it ( a simple brown diffuse). I’m unsure if the render times are because of the added effects, or if I messed up something with my project. I’ve gone through and turned down any of the quality settings that I thought I could afford to so that I could render faster. I’m using cycles render, but I don’t have a GPU that supports GPU rendering. I was wondering if someone could take a look at my .blend file and see if I’ve done something wrong, or if it’s just my computer.
Here’s a link to the .blend file

Thank you so much!!! 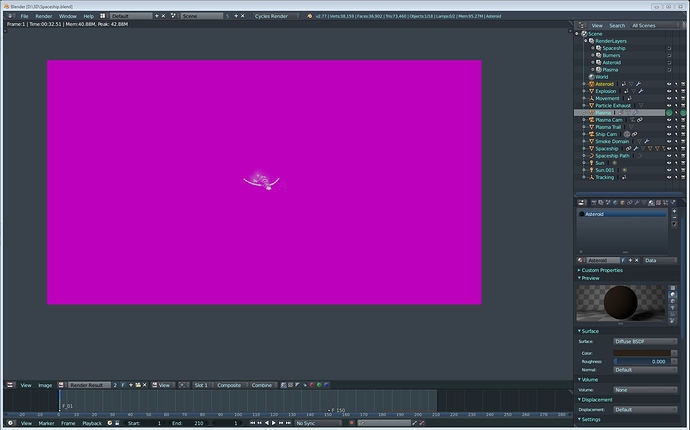 as you see, about 33 seconds. Maybe it’s the missing texture (HDRI?)

It’s actually only the frames with the asteroid in them, frame 166 and up, all the ones with the spaceship render just fine. I was using an HDRI, but I changed it to a more simple .jpg because I thought that might be slowing it down. Here’s the background environment texture I used. I do’nt really think that it’s the background image though, because I have it in every frame, not just the ones that are lagging so badly.

Thank you for your response! Actually the frames with the spaceship all render fairly well, its only the ones with the asteroid, frame 166 and on, that have been lagging so bad.
I was using a HDRI as a background enviroment texture but changed it to a jpg because I thought that might speed up the render. However I don’t think it has to do with the background image, because that is present in every frame, not just the ones lagging. Here’s a link to the .jpg i used.

Even with dropped from scene World (which is using jpg anyways and would cause even more render time as opposed to simply post processed in) render of explosion and debris takes 6 minutes per frame on GTX760 GPU. If you have a slow paced CPU… For me this would be 40 minutes frame i guess.
You could lower Subsurf value for the render probably but explosions and stuff takes time even on a powerful pcs.

What are your hardware specs?

In any situation like that, it’s time to “put on your thinking-cap” and look for other ways to get the job done. For example, Blender Internal (BI) might be used to create a smoke particle-system. Then, some kind of splash of red particles. And so on, all of which are then composited together in some suitably-creative way to produce … a serviceable end to this spacecraft. A “good enough” explosion that can be produced “in time to meet deadline.” 'Cuz, if there’s something that actually justifies “that-many minutes per frame,” ‘an explosion’ ain’t that ‘something.’ :ba:

I intend to render about a 700 frame video with smoke and fire and other objects floating around at a resolution of 1920x1080. I’m on a laptop and I’ll not render it on this machine but on a more powerful computer, but…at 10% of the final resolution and with a smoke resolution of only 32 500 of those 700 frames takes about 4 hours to render that is looking at the rendered frames when the flame is about 2% of the total canvas in size. A still frame of the flame up close takes much longer, it might take weeks to render the final thing on this crappy laptop. Which is why I’ll intend to use a more powerful computer for the final thing.

I heard there might be some bug in the latest release of blender though, anyone who can confirm this, because I would gladly use an older version of blender if it would half the render times. Anyone knows anything?

You could try starting with a fresh .blend file, and appending all your objects, materials and particle systems into the new file. In my own recent experience using 2.76, doing this helped me go from a 30 minute render down to a 2 minute render with the exact same render settings! I don’t know exactly why this happened though.

So my suggestion is changing the Sampling mode to Branched Path Tracing and increase the value of it gradually to balance the rendering time and result.