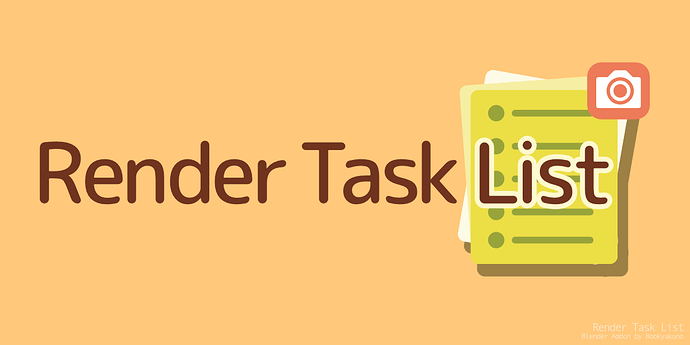 You can make various individual settings for each task. 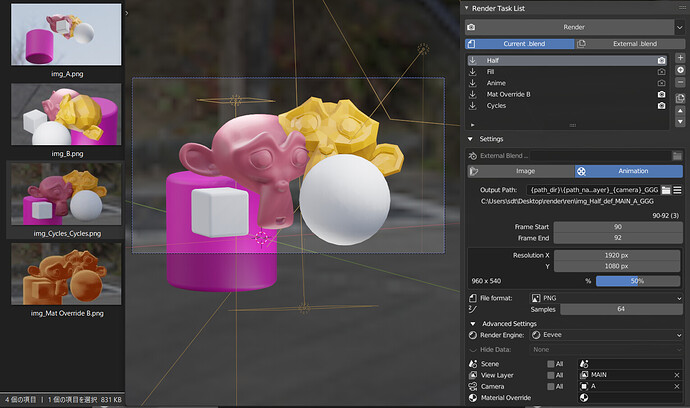 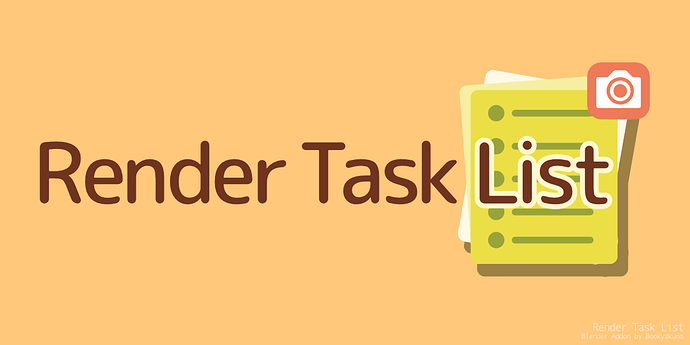 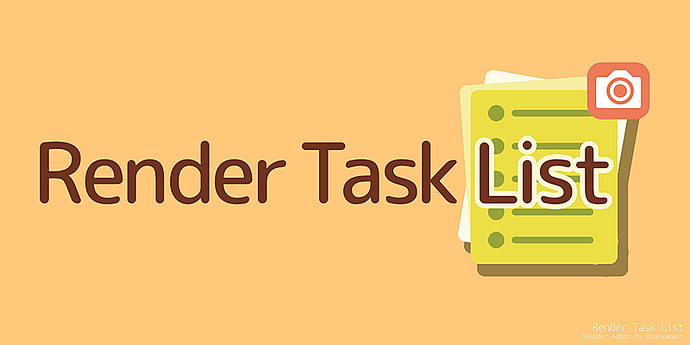 Rendering external blend files is still experimental and has some limited functionality. 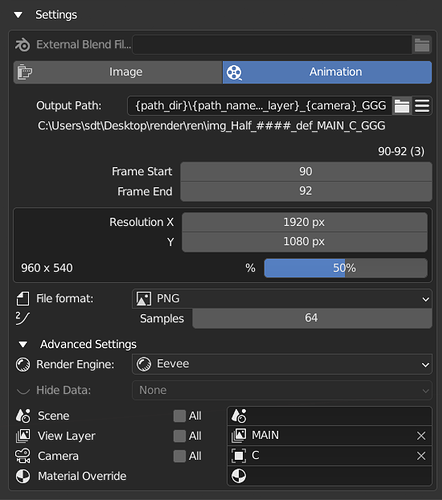 You can render continuously, switching between different options for each list item.

You can load various saved settings from the icon on the left side of the list item.
It can also be used as a list for saving settings without rendering.

You can specify each frame in a discrete manner.
You can specify the frame range by using’-’ or’ …’.
The total number of frames to render is displayed in () on the right. 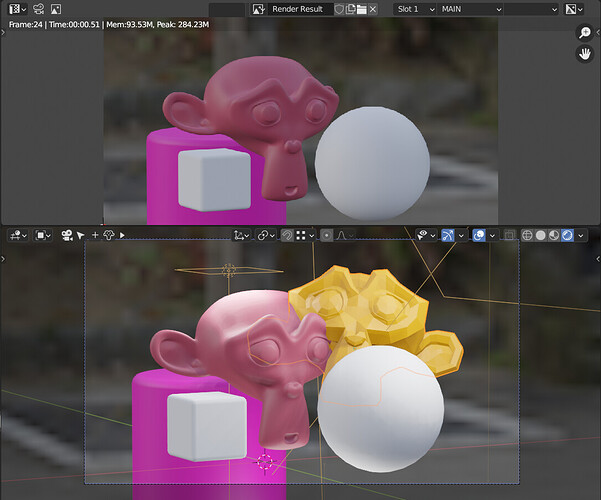 You can temporarily unrender a particular collection of objects before rendering.

It can be used to disable certain lights, etc., and can be hidden more easily than using a view layer.

You can specify multiple data to hide.
When specifying multiple items, separate the data names with “,”.

You can add an active collection or selected object from the load button. 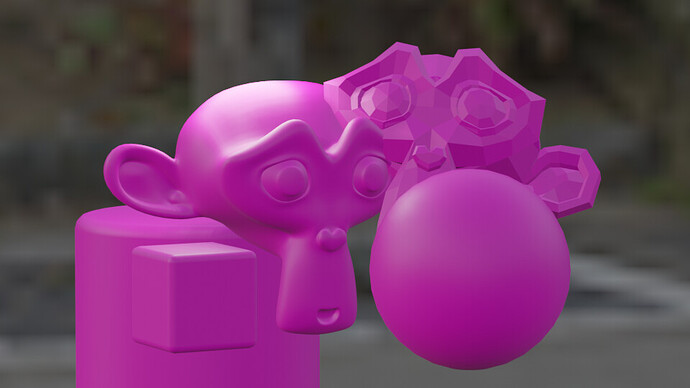 Create a temporary duplicate scene to replace all material assignments before rendering.
This makes material overrides available to all rendering engines, including Eevee.

You can specify different data than the current scene view layer camera.

You can export all scenes, all view layers, and all cameras.

Each setting is processed coexistingly.
Example: When scene 3 and camera 6 are rendered as images, 18 images are rendered. 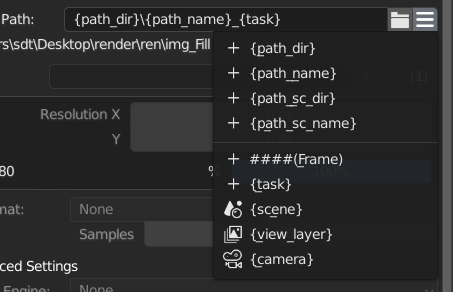 If you use special characters in the file path, they will be converted to that data name.
You can divide the data into folders and make it easier to identify the exported images.

These settings are required to avoid duplicate filenames when rendering multiple similar tasks.

You can render the current Blend file.
It is still experimental and has limited functionality.

You can easily check the progress of the rendering that is being executed.

Added an option to add 3 digits to the end of the number of files with the same name in the output folder to prevent overwriting.
This is useful when you want to save the differences.

Export a normal map using Matcap.
Textures are not supported.
It is experimental and may not coexist with some options.

Thank you for doing this, @Bookyakuno!
I was missing tokens from C4D and now I’ve got them in Blender

Is there some known issue with Blender 2.91? I’m getting an error:

I don’t know the details because it cannot be reproduced in my environment.

It may be because the file properties of the rentask_task_temp.py are read-only, or the hierarchy up to this file is read-only and cannot be edited.

Alternatively, open Blender with administrator privileges and render the add-on.

You’re right.
That PermissionError: [Errno 13] Permission denied should have rung a bell.
Everything is working fine now. Thanks!

Sorry if it’s mentioned somewhere, I might have missed it: does it also handle compositing passes?

does it also handle compositing passes?

Add-ons cannot adjust the render pass.
However, if you set it in advance, it will be rendered, so you can save the render pass as an image file by setting the output node in the composite editor.

Thanks for the explanation @Bookyakuno
Too bad Blender doesn’t allow this, it would be very handy. 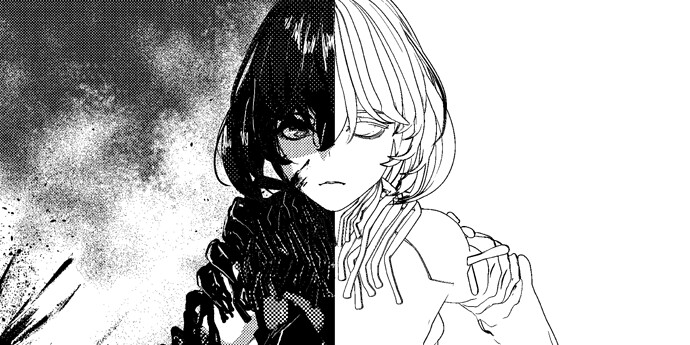 The line quality is low, but it’s easier and faster than freestyle.

By processing the normal pass with composite, a simple line can be drawn. 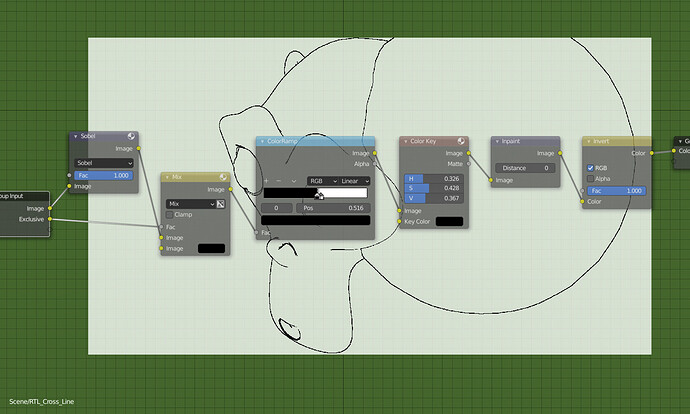 Temporarily link copy the current scene and load the processing node group from the blend file in the add-on.

Editing this node will also reflect the intersection line rendering. Edit the blend file in the add-on before the first load, or edit the node groups that remain in the project after the load.

By connecting a black-and-white image to the exclusive socket of the node group, you can exclude the lines that you do not want to appear.
White is excluded.

If there is a socket named vcol in the render layer, it will be automatically connected to the Exclusive socket.
For example, it’s a good idea to have an AOV output named vcol for each material and connect the vertex colors. Fill the vertex color with black, and paint the areas where you do not want to draw lines with white.

If there is a socket named vcol in the render layer, it will be automatically connected to the Exclusive socket. For example, it’s a good idea to have an AOV output named vcol for each material and connect the vertex colors. Fill the vertex color with black, and paint the areas where you do not want to draw lines with white.

Set up a cross line scene 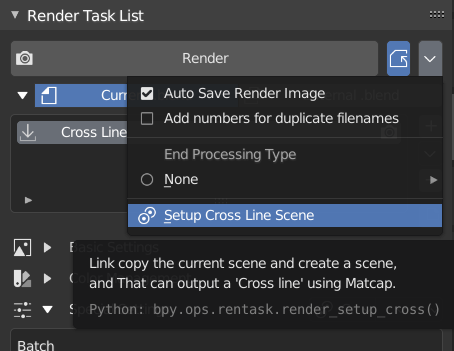 A “Set up cross line scene” operator has been added.
Create only the scene for the intersection without rendering. 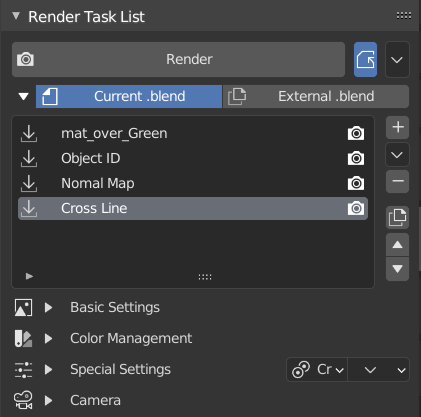 As the number of options has increased, we have changed the menu classification again.
The list display can be collapsed. When the list is collapsed, only the names of the active items are displayed.

Added a list that makes it easy to switch and select cameras in the scene.

Special settings are summarized in the “Special Pass” option 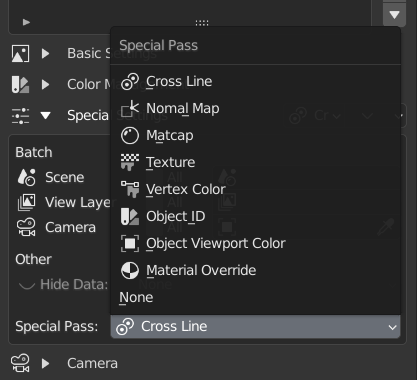 Outputs a simple display render material using Workbench, such as a pseudo normal map or a simple object ID (hence, it does not support transparency such as textures).
The previous material override feature has been moved to the force assignment option within the material override . 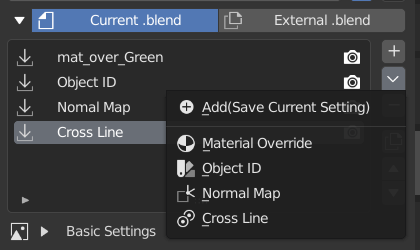 Create a list item that renders a special pass.
This is useful when you want to render a specific element immediately.

Purge all unused data after rendering

The forced allocation material override option makes a full copy of the scene during internal processing, but avoids this as it leaves unused data on deletion.
Works when forced assignment material overrides are enabled.
This is a scene option and will be processed after all renderings have been completed.

I used to use the save option of bpy.ops.render.render (), but
I changed it to save using bpy.data.images [‘Render Result’] .save_render ().

I’m sorry. I just added ver1.3.0 to gumroad.
It seems that it was not saved normally at the time of the previous addition.
Thank you for reporting.