Hello, I’m relatively new to Blender and, so far, I’ve only done short animations. However, I’m now using the Video Sequence Editor and I cannot get any audio. I’ve looked at a tutorial via YouTube and, there, there was an Audio tab next to the Format and Stamp tabs on the Render window. (I’m also not hearing any audio through videos imported to the VSE.)

Can somebody please tell me how I can hear audio via the VSE and then render audio, as well?

Huge, bottomless expressions of gratitude to the Blender community, as always. 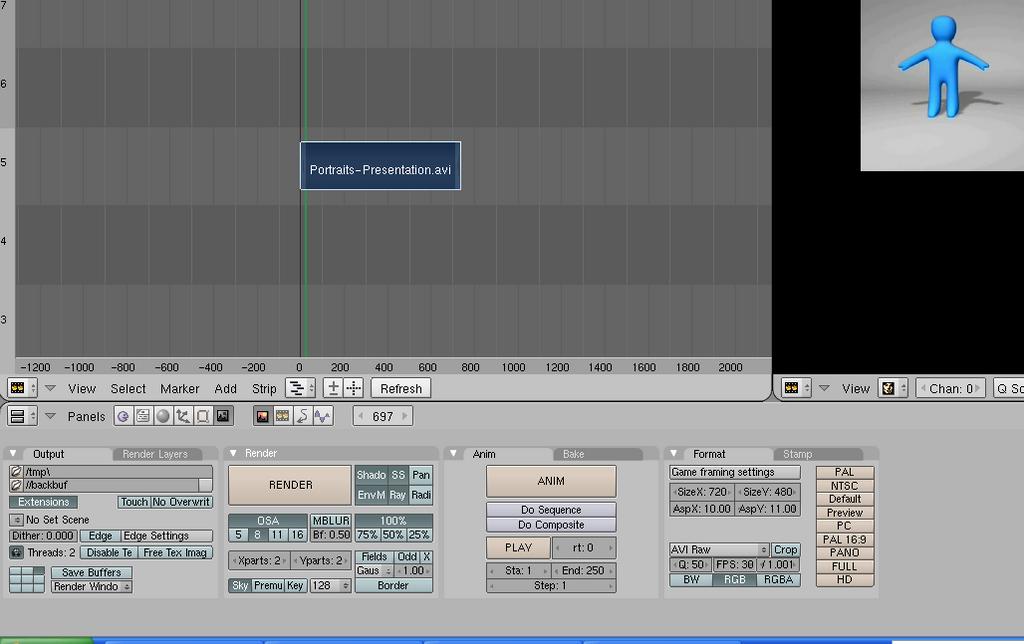 To get audio in your videos:

Firstly I’d suggest that you install Blender 2.57b (going by the screenshot there that seems to be 2.49)

Then: Choose MPEG from the Output window, then under ‘Encoding’ choose MPEG-2 for video and MP3 for audio. Should export with sound. Perhaps MP3 audio with your current setup may work. But 2.49 in my book is only useful for some game demos and bevelling.

Thanks for the tips, Chucker.

I don’t use the program enough to really want to invest a few days to learn the totally new interface with the latest generation of Blender. (I know that that’s something I’m gonna have to do eventually, but I really don’t wanna do that just yet.)

But if I can’t figure this out…then I’ll probably have to just go ahead and download the latest one. Thanks again.

I figured out the problems.

I had my output render set to the .AVI format. For whatever reason, Blender apparently doesn’t let you render .AVIs with audio. But if you set the output format to .MMPEG video (and probably some other formats, as well), then the Audio tab shows up in the render window, and so you can set up the options.

As far as the audio showing up in the VSE window, I believe what I did was import the video file again, but I imported it as “HD Audio” rather than as a video. This, then, brought up an audio bar in the VSE window.

Glad to see you got it working, Blender is still my preferred video editor on Linux at least.