Rendering a scene in literally just black and white

Hey all, I’m working on some 3D cartoons that are trying to emulate black and white, pen and ink comic books as far as visuals go. I want to have it be completely black and white, with tonal values only done by zipatones or patterns of black. My initial idea was to add textures to my objects, however, if the objects are too close or too far away in the scene, the effect is lost. The texture wrapping around curved objects is also a problem.

I was hoping there was possibly a way to pull this off in the rendering stage, where perhaps there was a setting, plugin or the like that I could have gray materials render as black and white tonal patterns instead.

Does anyone know where I could look to try and pull this off?

You can create a similar effect without the dot matrix in Blender, just use Toon shading in your objects. About the dot matrix, there’s a external render that can do that. Sadly I cannot remember its name.

Anyone else have any ideas? I’ve been Googling, but without really knowing what I’m searching for, I’m not having much luck…

Remember that Blender is 3D program. The comic book frame you posted were hand rendered, and dark and light paten were created to serve the composition of the image. They are not real, 3D wise that is.

I did little test setup with Blender toon shader. Here is straight render. I did not try to smooth out the object. Hard edged faces do create more dramatic look with hard shadows. To get halftone gray pattern, you need to use Compositor; get an alpha map and fill with halftone. But then all that wrinkles on the clothing will need to be modeled! 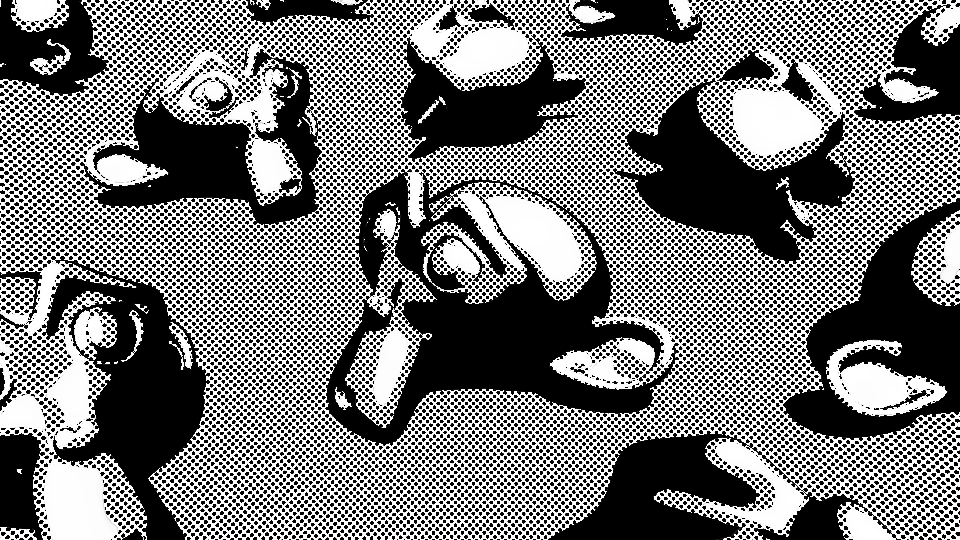 Few years ago I found this on this forum (can’t find the original post, so if someone knows write it here thanks). Also I have a node setup if you are interested in (a bit complicated

This is pretty close to what I’m looking for, but I haven’t done anything with nodes before. You have any suggestions for tutorials that are a decent starting point for figuring them out?

is it steel great piece of noding

@TommyOliver: not sure were to go, try wiki Manual http://wiki.blender.org/index.php/Doc:Manual
(Link you can find in blender under Help menu.)

OK, so after looking at the .blend file vklidu posted and lookin at the node setup, I want to set up something similar. However, instead of mixing a world texture in its own render layer with all the geometry, I want to mix a world texture with just a certain material. So wherever say, a 50% grey material is, it is rendered instead as a dot pattern. Is this possible with nodes? It seems that there is no way to mix the “render layer” and “material” nodes, as they aren’t under the same node group. It’s getting pretty frustrating, is it just not possible?

anyone? if not combining a world texture with a material, would is be possible to assign a vertex group to it?

TommyOliver, take a look at the thread of the image that posted vklidu…

Great little thread here. Anyone have any links to tutorials or information that focuses on just toon shading and creating a “2D” look on 3D models?

I have an alternative way of doing this using G.I.M.P.
render your video to images and open them in GIMP editing them in batch mode with this;

I used the “FX-Foundry > Photo > Effects > Roy Lichtenstein” filter on it after using “colour > Desaturate” to turn it greyscale.
(This is an image of an actual person, the image of which I found on and got from imageafter.com)
that filter has a huge array of adjustments for you to play with too. 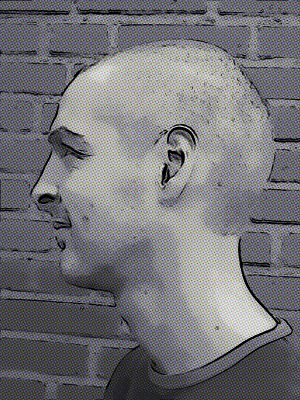 Yea I’ve been rendering stills and using Gimps built in newsprint filter to achieve similar results, but it’ll start getting arduous once I begin animating, which is why I was hoping to find a way to do this with either rendering or composting.