I was wondering if there was a way to set up four different cameras in a scene so that when I render, it will render through each camera and then stack the four rendered images into one final output image. The below image demonstrates what I mean. 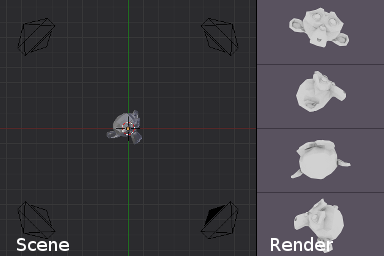 Just render animation 4 frames. and then in composition you can play with taking that renders and then using nodes crop etc. to compose it

Thank you for your response, but I don’t quite understand what you mean. Maybe you could attach a .blend file with the solution you just described. That would be really helpful

Sequencer can do that job really easy…

What I do is slightly different … more like real-world filmmaking technique.

Basically, the first thing that I do is to set up “the set(s),” and for each set, the “camera setups” that will be used on each set. Ambient light is turned-up, the various objects are linked (even though they might be rough geometric shapes, done to scale…), and a rough notion of lighting is in place. I then set up the action and “shoot” it, using low-res preview rendering, from each camera. The frames in the shot are labeled with the scene, camera-number, and frame-number.

These then go straight away to Final-Cut, which is what I actually use for editing. And that is precisely what I do next: I “rough cut” the film as though it were a film. I’ve got six shots of Suzanne doing her entire move from the POV of six cams, and I cut those together however suits me. Everything is saved and logged.

Then, “taking off” the camera and frame numbers from the rough-cut, I now know what shots, and what frame-number ranges from those shots, are going to be used. Those (and only those…) are what now has to be developed. And they are developed in such a way that, when the final version is cut-together with the original stand-ins, they match exactly. In other words, I thought about camera-angles, lighting, lens settings and so-forth while staring at to-scale colored blocks. When rendering, I might look at my spreadsheet and know that only frames 81-107, 146-161 and 211-310 will be finished.