Hey everyone, it’s hard to give a clear idea of the issue i’m facing right now in my scene with few words on a title but i tried my best.

Basically i have a landscape scene (the one that had the other issue i wrote about in the other topic, luckyly solved now) and i created a plane with a sort of glassy transparent material, that simulates rain droplets coming down, and i put it right in front of the camera, as to give the spectator the feeling of looking through a window or a smartphone/camera screen.
The problem is that when i render the first frame just to test out the effect i immediately noticed that the whole scene had been zoomed in, thus i had to reposition the camera in order to find the previous perspective i wanted for my video. This solution though is not ideal.
If possible i would like to understand how comes the rendered scene is zoomed in when i put that plane in front of the camera. The effect goes away as soon as i remove it of course.
If it can help i can post the shader nodes screen (which i copied from a tutorial i found on youtube) for you to check if the cause of the issue belongs to one of those nodes specifically and if it can be corrected. 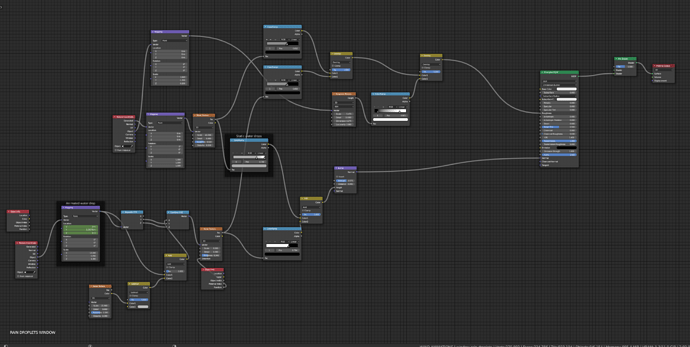 That’s how refraction works. Note the IOR (index of refraction) property in the principled BSDF - with values different from 1.0 you shouldn’t use just a plane as it has only one “side”.
Either change it to 1.0 (but you will probably loose the whole raindrops effect) or give your plane some depth and then apply the raindrop material to the outer side and a plain glass material (might just use your BSDF but without those additional inputs) to the inner side.
That would be pretty much physically correct.

Thanks for the suggestion Lucas.
I tried first changing IOR to 1.0 but you were right, it lost the raindrops effect, so i added a solidify modifier and kept that material on the outside face (facing the landscape) and added a new glass material (a simple principled bsdf with transmission to 1.0 would be ok?

) but unfortunately the result was not different than the original with just a plane only.

Leave the IOR the same for both materials, default 1.45 (glass) should be fine but you might try other values too, take a look at this list https://pixelandpoly.com/ior.html

IOR of 1.0 is basically no refraction at all (air) - that is why it didn’t work.