Hey, I want to render a quicktime video of a bullet out of blender, and the bullet goes shooting by the camera. I want the background to be transparent so I can just drop it in after effects and there it is set to go with a transparent background. I know quicktime has an alpha channel, so it should work. I do’nt want to do png though, I want to do quicktime but don’t know how. : ) how do I do it? any help would be GREATLY appreciated,

Set your render output to Quicktime format and set your compression type to ‘animation’ in the configuration dialog that appears. Click the ‘RGBA’ button that is beneath your frame-rate setting to tell Blender to render out RGB + Alpha. In the render panel click the ‘premul’ button to multiply the alpha of the background in advance, and render your animation!

One thing to remember is that the Quicktime output is broken as of version 2.45.12. I has remained broken with 2.46 RC1 as well.

The problem with the format is that when you render to quicktime under windows with Quicktime Pro 7.0 installed, the frame rate embedded in the final MOV file is divided by 10. So to when you render a 30fps movie, it will only playback at 3fps (After Effects sees it this way too). There is a limit in the interface to prevent you from entering 300fps and thus possibly kludging a work around.

No one seems to care about this bug, I have mentioned it several times.

So you are better off just using the PNG sequence with an alpha channel. Remember to set your anitialias filter to CatRom instead of Gaus for a “crisper” look.

Hum! QuickTime ProRes would not render the alpha background?! :eek:

thanks guys, I’ll give it a try.

Quicktime Pro definately does support and alpha channel out of After Effects. So if you are not getting an alpha out of Blender and you have RGBA button selected upon render, this could be another part of the Blender program that is “broken”,

I selected the camera, deleted its material, set the render mode to rgba, quicktime animation, then I set the rinder thingy to premul and TATATATTATATATAAAAA it was complete!

The fact is the “Animation” codec is still a compression and if you do a looooooot of cutting for postedition, it could be damageable for the end result.
Yet having a .mov with alpha is much easier to use (except in Shake) when mounting with few channels.
I was wondering if i would render in Animation mode with larger frame sizes to gain some better definition later on… Just an idea (yet)…

thanks
I dodn’t really see anything wrong with the animation

The newly integrated QT codec ProRes is realy outrageous (takes a lot of disk space - but far less than uncompressed, yet with the same quality). With the Animation codec things are somhow getting “blury”.
For many cases, when alpha isn’t absolute necessity (transparent objects) i rather put a green or blue background and take it off in compositing postprod.

when I try to play quicktime, I get the signal in the attatched picture. I don’t know why. any suggestions???

I Have To Write Ten Letters 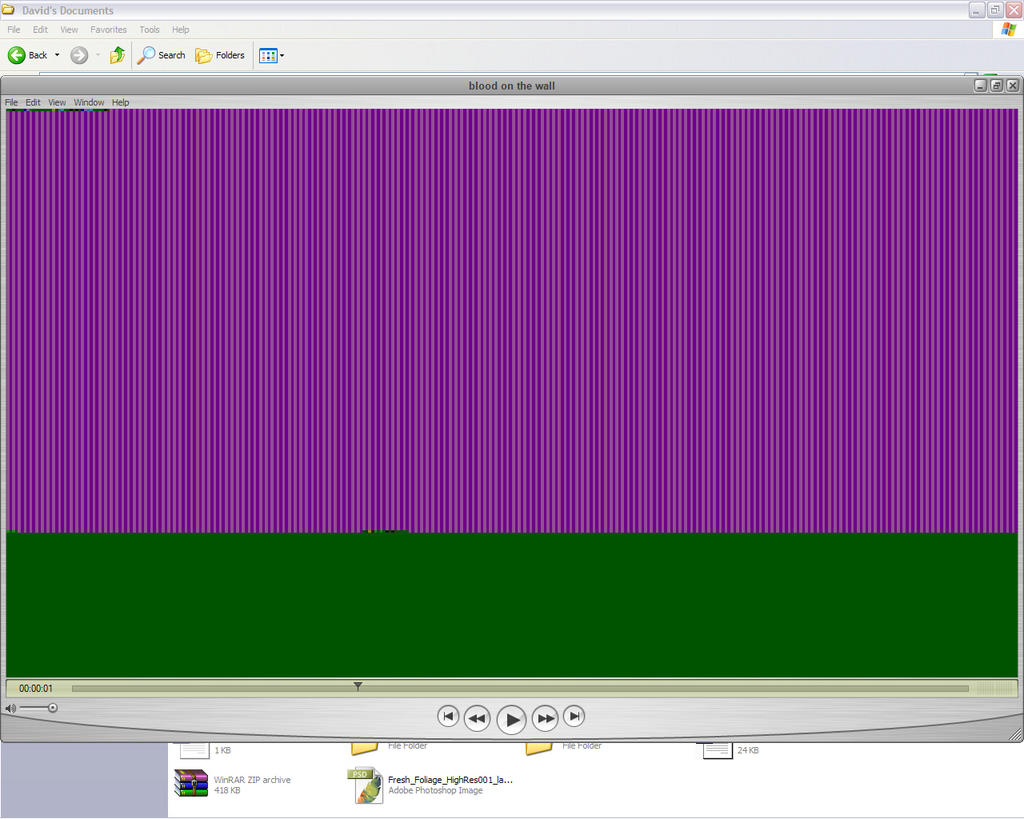 Gosh! Shoudn’t do that! It’s certainly not what you modeled, right?
Have you made few tests with small extracts in between?

“Have you made few tests with small extracts in between?” I am not quite sure what you mean

I was thinking about
a) Tweaking around with different render values, codecs, etc
b) If you have QT Pro, trying to exports and/or save as peaces of your work to see if ther are any obvious changes

“small exracts” of your Blender file (something like 1 second/or around 25 frames) just to have as many various testing samples as quickly as possible.
Also have a look if you got the latest version of QT for windows. And don’t hesitate to send a message to Apple for QT troubleshooting if your problem is so persisting.
QT is a completely integrated thing in a Mac, but i don’t know much about it’s liability on other computers… sorry.

Thanx ill give it a try