We have successfully come out of beta and are live now. I am creating this thread especially for you, members of the BA community, so you can post your feedback and ask any questions you may have. Even if you had problems, I’d like to hear about them so we can find solutions to them.

I will ask a moderator to close the old topic, because it’s no longer actual.

Does it support physics cache ?

We fully support baking physics on our farm. Everything should be supported at this moment, including the latest additions in 2.66 . Here’s our support page that describes in more detail how to prepare your files for baking on our farm:
https://render.uservoice.com/knowledgebase/articles/161291-how-baking-works-on-renderstreet

Just popping in to say these guys are by far the best online rendering solution I could find after searching for about 2 months. Setting up and rendering is literally as easy as uploading photos to Facebook. For me their site was simple and straightforward with great support and I didn’t run into any bugs as I did with other options. The render speeds are incredible (coming from a single GTX580 user) and the costs are easily justifiable for commercial jobs. For hobbies, it might be too expensive for long, high quality animations though.

EDIT: Here’s a quick test they rendered out for me in no time

Very nice, but why is the subscription fee mentioned in twice? It would be nice if the calculator also estimates how long the job might take.

I assume you are asking about our pricing page. The price is mentioned both at the top of the table and at the bottom, so people with small monitors can see it when they have the page scrolled. So it’s for convenience only

The time a render takes can’t be estimated without the file actually rendering. Not even Blender, with the file opened in it, provides such an estimate. Generally speaking though, we can allocate enough servers to get the animations rendered fast enough (two hours or less depending on how many frames).

For still images, we have an option to break the image into parts and render it on multiple machines so it speeds it up. The stitching is done automatically after each part is rendered and you can preview the render as soon as a part is done rendering.

I want to update this thread with some of the new features we added in the meantime to our farm. I won’t go in detail here, but you can read more about each of them on our blog.

As always, if you have any questions or feedback, please post them here or contact us directly.

Another small update - we added a 2.66 build supporting OSL to our farm.

Those it work like that i just write somethink or download plugin to blender make all sceeen in blender and then just press render?

price per service hour is not very helpful and fair. It should be price per Ghz hour like every other farm has it as. Why its not fair; lets say you guys today have 690 and tomorrow you have titans. Price will be the same per service hour but the 690 will cost more because it takes longer. The things thats great is that you guys are so up to date and really blender dedicated.

We don’t have a plugin at this point, because we update the blender versions we support very often and it would not be feasible to maintain a plugin that works with all versions.

Did that answer your question?

Larmannjan, I see your point, and there are other aspects to consider as well:

I do agree that showing the price per GHz is not fair, in particular for the end user who is forced to do a lot of math to understand what that means in terms or performance.

I’ve been using the service and I have to say its really good.

The ability to render passes and save to EXR is excellent.

how much ram to CPUs have

The CPU servers have 64GB RAM. The ram on the GPUs is 3GB.

We automatically detect if a job runs out of memory on GPU and move it to be rendered on CPU instead.

Question: Do you guys support all the cycles hair parameters?

I did a render where the hair was supposed to be curly but it came back straight. I applied the curliness through the roughness parameter under children.

We definitely support them, as long as they are supported in the version of blender you selected to render with.

Please PM me with your job details and give me your permission to look at the job and we’ll look at it and try to figure out why it didn’t render as expected.

there is a slight error on the website, not really an error. 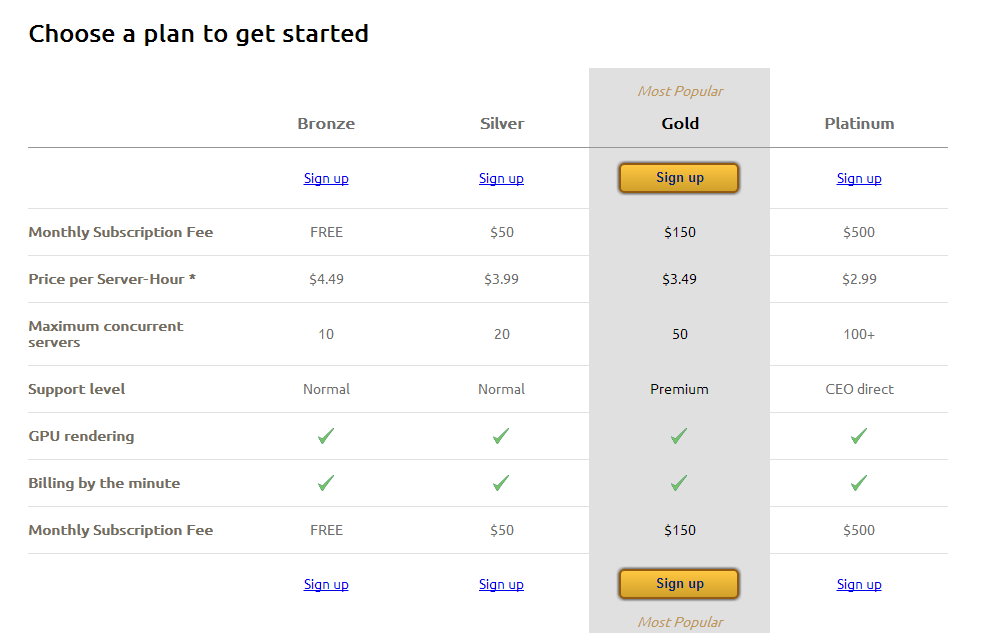 I have only rendered two to three images at RenderStreet but was very happy with the outcome and ease of use of the browser interface for setting up your job.
Even though the job is based per server hour you are only charged for the actual minutes the job took to render. It is not rounded off to the nearest server hour. As the job is rendering you get updates on the amount of time the render has taken so far and the price you are being charged for that time.

Larmannjan, the price and signup buttons are repeated on purpose, so that people with low screen resolution do not have to scroll to find them. It’s a design choice.