Reorganizing and parenting objects in the outliner

Three things: First, how can I manually reorder the list in the outliner? Like in this example, I would like all body parts to be together. But if I drag L_eye between Lights and R_eye, it’s just going to parent it to lights. I just want to put it over R_eye.

Second thing is about parenting. Let’s say I want to parent eyes, body and head to Character. If I shift select all body part and drag them over Character, only the first one will be parented. I have to do them one by one. Now, I only have 4 parts here but what if I had 1000? Is there a way to do it directly in the outliner without having to go to the view port?

Lastly, let’s say all my parts are now parented to Character. If I select Character and delete it, it only deletes the Character node but not everything that was under it. So if I had for example a thank with thousands of parts, how could I delete the top node with everything under it? Even if I try Select Hiearachy first, it still doesn’t work. 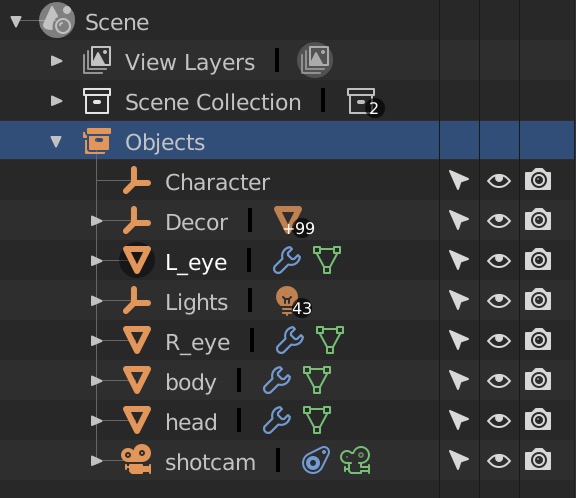 A1: Organize them by name. Always use your category first:

You get the idea. Use naming convention at scene level, data level and object level. (yes there are 3 categs for elements in the outline), also groups. That´s a broad subject.

A2: When you want to mass parent something: select all your children first on the scene view. Then pick your PARENT LAST, immediately press “Ctrl+P” then select: Keep transforms. 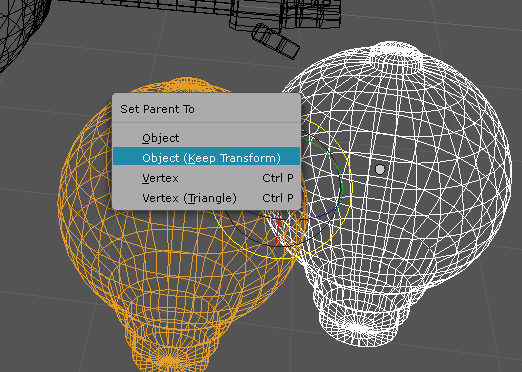 A3: To delete all the hierarchy (parent and children) at first run: Go to outliner and CTRL+Click select on the ICON of the parent (first icon in hierarchy) [Not on the name, not on the lines, not anywhere else] and then right click over it and hit DELETE HIERARCHY.

Thanks for asking. These kind of questions are not very obvious to some as workflow.
You may also want to try https://blender.stackexchange.com/

I´ll be gladly answering most of your questions there.
Cheers.

A2: But why do I have to do this in the view port? Why not just a simple drag and drop? It works for one object, why not more than one? That’s inconsistent behaviour.

A3: Why so complicated? Why not just select, delete? I’m having such a hard time with Blender and complicated workflow. Why do I need to press B in order to select more than one object? Why not just drag, like any other software on the planet? Same thing for unparenting. I can’t select multiple objects and drag them outside the group. If I want to move a bunch of objects from group A to groups B, are you telling me that I need to select everything, unparent, reselect everything the group B and reparent? That could just be a simple drag and drop in the outliner. I just don’t get the mentality behind Blender.

I feel like this is Blender’s way to turn your car on. So first you need to open the trunk, turn the lights on three times, put the radio on 98.5 fm then turn the key. I’m exaggerating of course but you get my point. All I want is to turn the key.

You can drag and drop to parent, but if you are in the View Layer view, you have to hold Shift while dragging. This was don’t to prevent accidental parenting.

Another way to organise things is simply to add more sub-collections. You could add collections for Head, Legs etc

That said, the Outliner could use lots of improvements still for things like basic selection and manipulation. It should be easier to use and more powerful, and with a few changes, it can be.

While you´re at the list: Why not make passes like other softwares? Render>Render AO> Set samples, right?
Why not make a schematic view like any other software in the planet, right?
Your frustration comes from a lot of previous experience in other packages, that cannot be applied on Blender. But don´t worry, I´m addressing this frustration issue and I´ll be uploading a video about it and how to overcome it and really master and dominate Blender. You´ll be glad you landed in this thread.

Yes, there are still some serious issues with the outliner, despite all the work being put into collections. I have been banging on about these issues for years, but for some reason, Blender users have just gotten used to the renaming and layer workarounds, so it has never gotten much attention. Anyone that comes from another 3d package that relies heavily on it’s scene tree like C4D or XSI will find Blender’s outliner very frustrating! And I am am no Blender newb, having been toying with it on and off for 15 years or so, and it being my main gamedev modelling tool for the last few years.

The way this should work, is that objects would be listed in creation order by default, and can at any time be re-ordered via drag/drop (as collections currently can be). The “order alphabetically” option would then be a command that can be clicked to reorder the items in the current selected collection, rather than being an always on toggle mode.

I also don’t think that having a flat hierarchy in the default collection mode was a good change, and was better with the earlier versions that showed a full hierarchy. When you switch modes to see your hierarchy, you lose the options to filter the outliner. I can’t help but think this is very counterproductive. I realise that some users want to have the same object in several collections and this is the reason for this decision, but there must be a more flexible way of going about this. I personally would only use collections much like I would use nulls in other software, as a way of grouping object hierarchies (one object only belongs to a single collection or sub-collection). Of course other users may prefer the existing workflow. Both types of users should be accommodated.

The other multiselect issues in the outliner have been mentioned many times before so don’t bear repeating. It feels like having a professional level outliner is finally within the grasp of 2.8, so I am hoping that it will see some more polish before it’s final release!

@William just for sake of curiosity: how do you call a collection inside another collection using bpy?
Say I have a function that locates any geometry whose name starts with “001” that is INSIDE a nested collection (a third level down parented collection). How would the py code look like? Thanks.

I’ve been having the same frustrations! When so many applications, be them 3d or 2d whatever, have a simple ability to reorder items in a layer stack you wonder what was so wrong with that system for a developer to avoid it and create a counterintuitive version??? I mean this isn’t ZBrush level contrarian approach, just a tad strange to go against a common and logical approach to UI.

This seem to be the standard defense for Blender, which I think ultimately prevents Blender from becoming an intuitive software.

NO, it’s not just us being used to other 3D softwares. People can adapt to different systems, but there is such a thing as LESS intuitive system. There ARE mechanisms that just make more sense. The Blender way is usually not just different, it’s MAJORLY confusing.

Can you get used to it? Sure. Ancient Roman mathematicians got used to doing math using Roman numerals. Did amazing stuff with it too. Doesn’t mean Roman numeral is just as easy to use as the Hindu numeral system does it?

I feel the SAME way about ZBrush. Extremely powerful, I got used to it and can use it easily now, but honestly it’s the least intuitive software I have ever, EVER seen.