Replace Boolean Modifier with old one

after Month of waiting, i dont see a future, where the broken Boolean Modifier gets a fix.
I would love to test Blender 2.8 but its useless for me, as long as Boolean is broken.
So, the big question is… Is it possible to take the old full funktional Modifier from an old Version like from 2.70 and replace the new one?

Thx and have a nice Weekend!

There is a todo thread on improving boolean modifier, but it takes too long to investigate and @ideasman42 is pretty busy with other back-end stuffs eventually he will look at it -> https://developer.blender.org/T47030

sadly it seems like the “new” Boolean Modifier works in a different way.
Im looking into “fixes” and “improofement” for Month now. Nothing helps.
The only way to get my Work done, is to export my Meshes and use Blender 2.70.
BTW: For Everyone… Please dont get me wrong! Blender is Free and i 100% honor the Devs Work!!!
This is nothing about complaining. As a German, i just dont have to many Words to explain Stuff

They should have not remove the old carve solver until the new one was fixed. And to make it worse, the new one might take years until someone will look into it. Apparently there are other priorities right now…

of course its possible, Blender is libre software and like all libre software gives access to its source code , so you only need to go in and integrate back the old source for boolean modifier.

if you are not a dev and do not want to learn how to become one then you are out of luck, a user has very limited power over software, especially libre software. The only thing you can do is wait for a dev to accidentally take on boolean modifiers because the ratio between user and devs right now is around 10000:1 which means we get 1 dev every 10 thousand users.

As you can imagine the supply is nowhere near enough to satisfy the demand. Devs todo list is about 10 thousand times larger than that of an average user.

if the Blender dev is hired full time and part time and your feature request is very popular its likely that they handle it. With devs working for free which make the majority of Blender devs you are completely out of luck even with popular features because they get to decide the area they want to work on after of course getting approval on their ideas from main devs.

So overall its extremely hard for a user to get his feature request dealt with because even if a dev agrees its important its extremely unlikely he will find the time to deal with it when his todo list is so long and there are much bigger fish to fry.

On the matter of 2.8 , it still not an “official” release , it still has a ton of bugs and tons of features missing. Its also highly unlikely that with the 2.8 coming soon will be actually stable or have back all the features from 2.79. To get to the 2.79 I will dare an assumption here that this wont happen until 2020. Still I recommend to people to switch to 2.8 because a) its awesome b) it still move forward and is highly likely it will see a lot of new changes especially now with the Blender getting much better funding and a movie on the making (an asset manager is an example on what may be coming in the 2019).

Conclusion: Blender devs are nowhere near enough in numbers to satisfy even popular feature requests. They want to help but simply lack the manpower to do so and are always in desperate need for new devs. if you want super stable , reliable and fully functional stick with 2.79 at least until the end of 2019. If you want cutting edge then jump in 2.8 ASAP but remember the “cutting” in the cutting edge is not just a fun term, it will literally cut you in many different places , painfully at time

We could use this skill for the manual

exactly , contributions can happen is many ways, even a video tutorial is very helpful for Blender.

Code wise, if we could assume that blender has around of 10 thousand users, if those users were spending like 10 minutes a day to write a line of code, that would equal to 3.5 million Ines of code per hear. This is double the amount of lines code for Blender source code. Of course a beginners coder cannot tackle serious projects like Eevee but there is a ton of things one can do for improving Blender that are very easy and can be coded even in Python which is super easy language to learn.

Simply put , encouraging users to participating in improving Blender is the only guarantee way to make Blender extremely awesome and make reality the vast majority of feature requests.

Fun fact: There are 23 million developers in the world working for more than 3.2 billion users. So the ratio 1:140 , but of course this is the ratio mostly for commercial software where the devs are paid and thus much easier to find. Still even though 1:140 is much better than 1:1000 its a extremely low to come remotely close to satisfy demand.

Well, that kinda points exactly to my dilema

I know, devs do a great work and i dont wona complain. On the other hand, 2.8 gives an absolute awesome new 3D window which i love vor modeling.

Im an CNC machinist and i use Blender to create animated cuts to show details and explain mechanic stuff to my trainees, ( like in MR Brain Scans.)
The old boolean did it just nice. No chance with the new one…
Learning Phyton is in my to do list… Since years

well Python would not help you here , Booleans are like most of Blender code coded in C and an advanced task for a beginner coder anyway.

In this case I advise patience, right now your best alternative is using both 2.8 and 2.79 and exchanging data between then through import and exports. FBX format should be more than enough in your case so you can use both 2.8 and 2.79 with ease.

Nothing wrong with using multiple versions of Blender. Its a bit tedious sure, but quite useful.

Oh, a little guide to move/switch/replace Modifiers would be awesome! It might fix all of my Problems.

The old modifier did a couple of things the current one does not, but the old one had a major drawback if you using it with detailed meshes.

Compared to the new one, the one based on Carve was incredibly slow. That meant it was not possible to make use of it in a near-interactive fashion for anything but the simplest meshes. The Bmesh one also seemed to have better handing with high-poly combinations in general (from my usage at least).

Besides that, Carve as a library was about dead as far as development was concerned. The devs. had to make a decision when even the bugs weren’t being fixed.

I am a dev, and I am actively working on the BMesh Boolean modifier right now, as my main priority. I hope to have something good to commit in one to two months.

If you can get boolean working with mesh parts having co-planar faces or perfectly intersecting edges (with automated removal of double-vertices), then providing it does not cost too much speed, it should become about perfect.

I also hope to see material preservation as that extra cherry

The part I’ve done so far is to write triangle/triangle intersection code that handles co-planar faces, intersecting (overlapping) edges, triangles that touch at a single point, etc. So hope to satisfy you on that point. Will look at doing the best I can at material and UV preservation,

Ooh, is “material preservation” what it would take to get Boxcutter/KitOps/Decalmachine working with different materials on each of their booleans? If so, looking forward to that!

I am wondering if creating a bisect modifier derivated from bisect tool will not be less painful and provide more satisfaction.

Have you checked out the “bisect” option in the mirror modifier in 2.8?

Bisect option in mirror modifier context gives a result closer to a Symmetrize than Bisect tool in edit mode.
That is a mirror modifier. There is always a part of mesh that is duplicated.

Here, people are complaining about Bmesh Boolean not acting like Carve boolean which was taking into account cutting through a plane or eliminating one part from one side of cutting plane.
That behavior is Bisect tool’s one in edit mode. 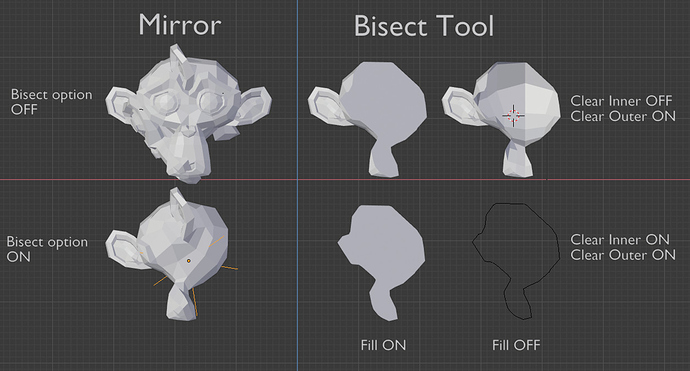