Anyone who played or watched Transformer surely knows how text is presented right? Its kinda a bunch of “alien” letters, and each of them turns letter by letter to real english phrases ( Translator). I am planning to build this effect into my game… Still experimenting with this blend, but i am still lost.

You guys should know at last how to fizzbuzz. Here is probably what you’re looking for: texti_text.blend (445 KB)

That said BGE is one of the worst engines out there when it comes to presenting text, consider yourself warned.

I made this because it sounded fun

I made this because it sounded fun

@@elmeunick9
Why did you feel the need to throw it in a post-render callback? His original code looks to be driven by an always pulse sensor.

On a side note: It seems to me that you’re trying to use another game engines programming paradims when using the BGE.
I’ve done this in the past, but have since discovered it is often easier to find out how an engine is intended to be programmed and run with that.

@Rockymadio
I believe the simplest change to your code to make it work is all of one line different:

Just in case, here’s the logic bricks to support it:

thanks sdfgeoff ^.^ it works too

here is a cool texture of a font i made years back. though u might like it. 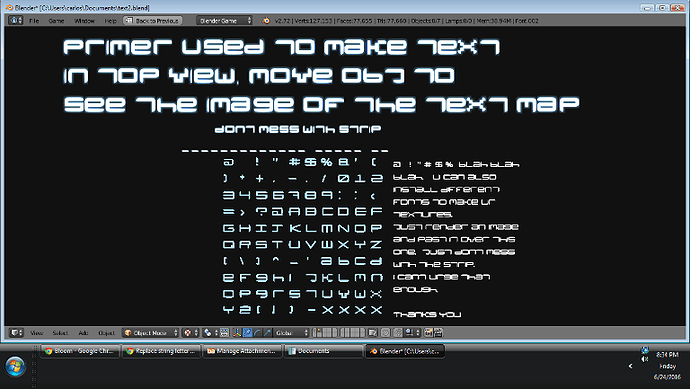