Rescue From an Alien Planet

I’ve been working on this project for about 20 days so far, it’s still far from finished. The astronaut is running towards a spaceship which came to rescue him after his ship crashed on the planet, and an alien dinosaur is trying to eat him. The spaceship is just a placeholder image until I finish the 3D model. This image is rendered with 5000 samples.

You may want to re-think the layout of the piece or just the camera angle. Most of the action takes place in the top left hand corner and the bottom right is completely empty. So maybe consider putting the space ship below the cliff to balance the shot (use the camera composition guides for reference) or crop the action in closer.

Its hard to say much when so much of the scene is a placeholder (the astronaut is just a picture too, right?), but I agree with Tyhuebne. Your composition is really letting you down here; every element of the image is on the same “plane” relative to the viewer, and while that means nothing is obscured it also means nothing is being emphasized. Still, you can play around with composition really easy in 3D, so try just swinging the camera around to get a more dramatic angle.

The alien monster also feels slapdash; there seems to a UV wrapping error on its stomach (the yellowish belly texture “jumps” to the back there) and it really needs a normal map to sell the bumpiness the scaly look suggests. Also, its limbs are far to thin and uniform to appear functional; I’d suggest sculpting. Can we get a closeup of the alien on it’s own so we can suggest something more specific?

All that said, the ice formations look really nice so I can’t wait to see what they look like fully rendered! Keep at it!

Thank you for the advice, here’s a render I did last night with some changes. I added a planet in the background, some mountains and clouds, motion blur, and another alien dinosaur walking around the ice formations in the bottom right.

Here’s a closeup of the dinosaur: Here’s a screenshot of the scene in blender: http://i.imgur.com/5Rtx3rT.png

Well, I think you might want to move a camera a little bit upper along Z axis. Not changing anything in its angles, just Z axis location. Thus, imo, the image’s bottom should be where the small rock stands and the second dinosaur appears. In this case, the main dinosaur won’t be on the very border of the image and its focus will be a lot more clear.

There are a lot of things wrong in the image like others are trying to tell you. 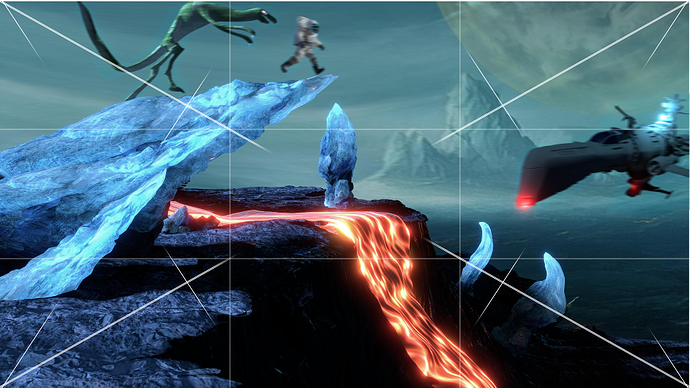 None of the point of interests fit on the common composition guides. Rule of thirds and golden ratio intersections shown. Many elements follow diagonals but they don’t do their part in getting the main focus to read. This means the things in the image are way off. 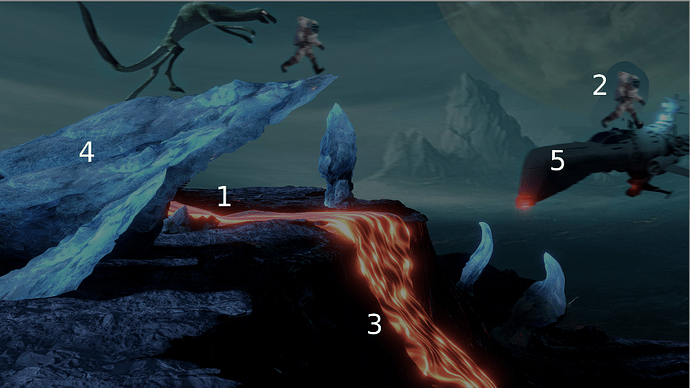 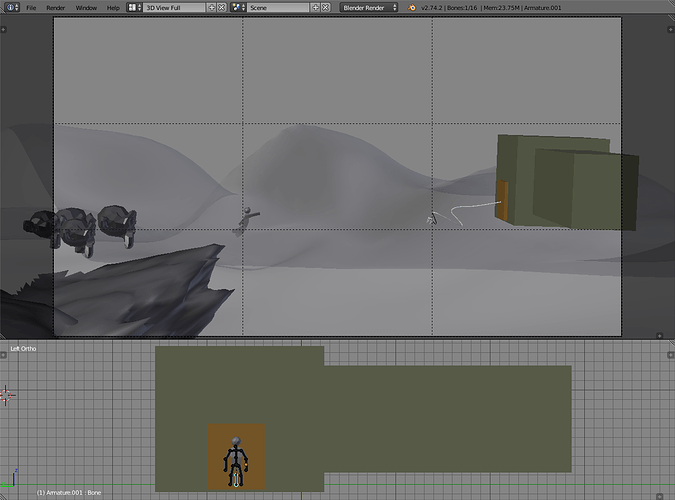 If you have to have a side shot like that, maybe something to this direction.

Thank you for your help and for taking the time to write the post. Here’s an updated image with the astronaut in the center and a new spaceship model. I deleted the alien and spaceship model because I’m replacing them with better models. The spaceship model is not finished yet.
https://www.imageupload.co.uk/image/Z5lE

This is better but I think you went too far. Having the astronaut in the middle leaves a lot of space to his left, and that means you’re emphasizing how much he’s traveled, not how far he still has to go. The drama of the shot is in the leap, and I think the empty space he needs to cover has to seem huge and imposing. Move the astronaut and ship to the thirds as JA12 suggested.

You also need to lower the camera and rotate back towards the horizon. In the previous image the spaceman was silhouetted against the lighter coloured sky, but now you’ve got a landscape behind him and it’s too monochrome. It takes a second to even register the astronaut is there. Also, you should add the atmospheric haze back in, it helped visually separate your action from the background and now the fully in focus hills and mountains are making the shot look too busy.

Having the astronaut in the middle leaves a lot of space to his left, and that means you’re emphasizing how much he’s traveled, not how far he still has to go. The drama of the shot is in the leap, and I think the empty space he needs to cover has to seem huge and imposing.

I agree (with that too). I didn’t explain it very well though, kinda hoped it would be obvious from the example.

Move the astronaut and ship to the thirds as JA12 suggested.

And it was just an example composition, while trying to keep the main elements and the shot angle. There probably are more exciting compositions to tell the story.

Should add that in that I positioned the launched equipment near the thirds point because it’s more relative to the action/story than the spaceship itself. Also I suggested a tracking light but forgot to mention it would be for a dark scene.

I also didn’t mention that for a bright scene, even the few elements I used support the composition: many of the lines in the image point to the astronaut like the cliff, huge suzanne heads look at him, launched equipment goes towards him, lines in the spaceship point there, mountain line curves towards him.
Like TidyPachiderm mentioned, I also separated foreground from the background. On earth which has an athmosphere, things that are far away have less contrast, look less detailed and have less saturation (Aerial perspective).

These kinds of composition elements all have an effect on what and how the viewer sees your image. It’s important that the viewer knows what he/she should look at without asking and not get lost on it. It should also help you to tell the story, because without thinking composition you have a jigsaw puzzle that hasn’t been assembled yet: all the pieces are there but they look like nothing before you put things in order.

Might also be useful to notice that it’s not just rendering and cgi you can apply composition tricks. I actually did that on two of the three images in my reply. In one I darkened everything to get the numbers to show up properly and in the screenshot I organized the views the way I wanted people to pay attention to it. Composition even works with text: We use paragraphs to separate subtopics and use bullet points and other tricks to give it structure, which helps the reader to focus and get the message we are trying to convey.

Thanks for all the advice. Here is an updated image with a better camera angle and astronaut pose. I finished the spaceship model but not the alien model.
https://www.imageupload.co.uk/images/2015/04/02/render13.png

Here is an updated image with a better camera angle and astronaut pose. I finished the spaceship model but not the alien model. https://www.imageupload.co.uk/images/2015/04/02/render13.png

That is much better. Not sure how you’re going to incorporate the alien in it, perhaps it would work best on the far left where it would show up just enough to explain why the astronaut is in such hurry (and you might not need to model the whole alien).

Few comments about the latest. See if they help to get what you want/like.

The motion blur doesn’t work and that’s because the astronaut and spaceship are main elements in the image, which is what the cameraman would try to capture and no camera would take a shot like that. Of course he (or she) could be chased by aliens and the focus could be off, but then the rest of the image would show effects of that too.

For reference, could do a google image search for “action photography” and see the images. One that is common to nearly all of them is that the main subject matter is in focus. If the camera moves, the (near) environment gets strong motion blur. There can be problems in low light situations because the camera needs speed to stop the motion but it would also need time to get more light in. There are ways to compensate for that though, http://photo.stackexchange.com/questions/40265/how-can-i-take-low-light-action-shots

Another issue is with the astronaut and spaceship pose. The astronaut thinks he’s a video game character, in which case I wish the planet is called Neinkraft and has very strong gravity. The spaceship looks like it’s going to hit the astronaut and the mountain camera is on, its scale is not very clear. It’s probably bigger than it looks, just far away, so it would need to be pushed back in value.

And that’s a good segway to another point. Separating foreground, middleground and background. I did quick edit to show that 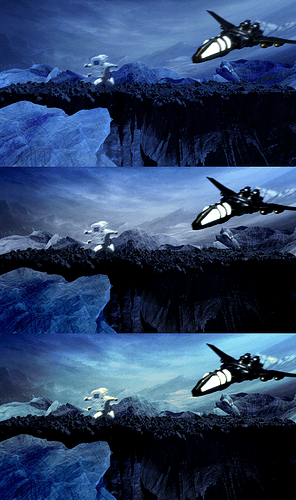 As mentioned earlier, on earth where there is athmosphere the far objects get less contrast and saturation. One could argue that there is no athmosphere on this planet so that wouldn’t apply, which is true, but you have to decide is it more important to be true to science (with aliens and spaceships) or that the viewer gets it. The sky does look like there are clouds so wouldn’t need to explain it but even if it was just another planet and no athmosphere, could make up a story where the planet releases gases from the soil and then it works again. Could also explain stronger color shifts with that.

It was a quick edit and got more light than the original but you get the idea.