how does one reset the rest pose so it matches the bones in edit mode ?

You can apply the current pose as rest pose:
https://docs.blender.org/manual/en/latest/animation/armatures/posing/editing/apply.html

I’m not 100% sure what you mean in your most recent reply, but the answer to your original question -

Did you apply All Transforms on your Armature?

I am not talking about the pose position, but the rest position

I think your problem might be that if you apply something as the Rest pose, the mesh will no longer deform:

Easily capture screenshots, GIFs, and replays that are ready to share. Download the free app for windows and mac.

no, I just hit tab to go from ‘edit’ to ‘pose’ mode and I see some bones are not positioned the same
which makes no sense since rest pose should be as I left it in edit mode

Did you try to to clear the transforms? 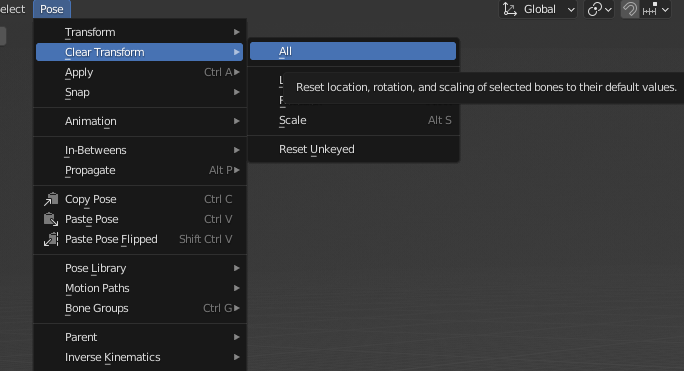 my issue is REST → EDIT

I don’t think we can help much more without screenshots, your problem isn’t reproducible without more information. When I apply a pose as rest, and switch to Edit mode, all the bones remain where I posed them

after a while, everything gets out of sink even if I remove the constraints

Having constraints will change things significantly, that would explain why RSEhlers and I haven’t been able to reproduce your problem

I honestly don’t understand what you’re looking for, again, without some screenshots, I don’t have any more suggestions

Having constraints will change things significantly

I was hoping that you would say that !

Or “OH! You didn’t mention that you had constraints…”

I wonder if the guys at SpaceX have these conversations.

it’s a more somber example, but the Challenger always comes to mind in situations like these.

Based upon O-ring erosion that had occurred in warmer launches, Morton Thiokol engineers were concerned over the effect the record-cold temperatures would have on the seal provided by the SRB O-rings for the launch.

Cecil Houston, the manager of the KSC office of the Marshall Space Flight Center, set up a conference call on the evening of January 27 to discuss the safety of the launch. Morton Thiokol engineers expressed their concerns about the effect of low temperatures on the resilience of the rubber O-rings. As the colder temperatures lowered the elasticity of the rubber O-rings, the engineers feared that the O-rings would not be extruded to form a seal at the time of launch.

The engineers argued that they did not have enough data to determine whether the O-rings would seal at temperatures colder than 53 °F (12 °C), the coldest launch of the Space Shuttle to date.

Lawrence Mulloy, the NASA SRB project manager, called Arnold Aldrich, the NASA Mission Management Team Leader, to discuss the launch decision and weather concerns, but did not mention the O-ring discussion; the two agreed to proceed with the launch.

Twas when I became aware of Richard P. Feynman

What an incredible man he was

It occurs to me, you were probably alive during the Challenger disaster, no? Were you one of the people that watched it on live TV?

For somebody that’s starting out with rigging, the most likely cause of this is the wrong pole angle/ pole target position on IK constraints.

Were you one of the people that watched it on live TV?

(I’ll try to keep this short)

I was a Cable TV technician in suburban Chicago. I had just finished a service call and was calling in on the radio to let them know. But the dispatcher did not respond. Within a few seconds another tech called in. Again, no response. And another and another.

Finally the dispatcher said “Stand by Damn It! We think the shuttle just blew up.”

Well, I floored it and got to my next appointment as fast as possible - it was for a minor problem.

On the way another tech - and my roommate - called in on the radio and said “Hey everybody… The shuttle just blew up! IT WAS SO COOL!”

When I arrived the cable customer was quite surprised that I was in such a hurry to get to the TV.

An hour or two later I had to go to the post office for something and the stunned silence was amazing.

That evening, when I took my completed paper work to dispatch she said “Ya know, Cal… Your roommate is a real asshole.”