Hello friends!
Today I bring you screens of the drawings that are on the Noam House Board: ResilienceSatelle-NoamDrawings_v23840×2160 1.48 MB
They were drawn by Noam in person

Hummm! Why would someone dream about eating an Apple!?

Have a great Sunday everyone!

any plans on adding a splash of color or deco to houses to further differentiate the residences? even a select few landmarks, the house covered in potted plants, the cat ladys house, etc?

Hehe, for the moment it ain’t a priority as the action is all centered on Noam House and all the city shots are wide shots and very short… Although

once we have all primary things made and if the chances of selling the project reveal to be promising, we may indeed bring those and many other details to the table. 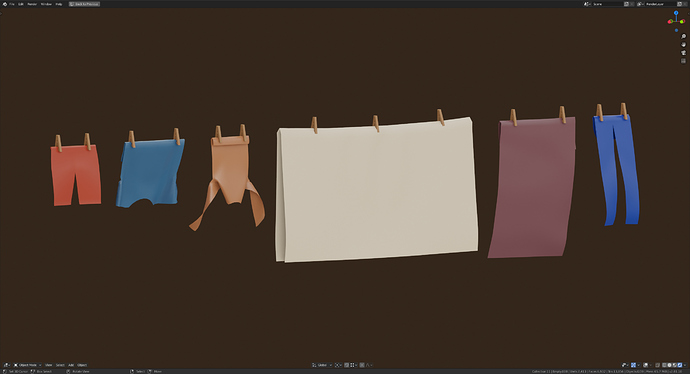 Today I bring you some simple clothes to be extended on ropes.
Tomorrow I will put the textures and it will be ready. 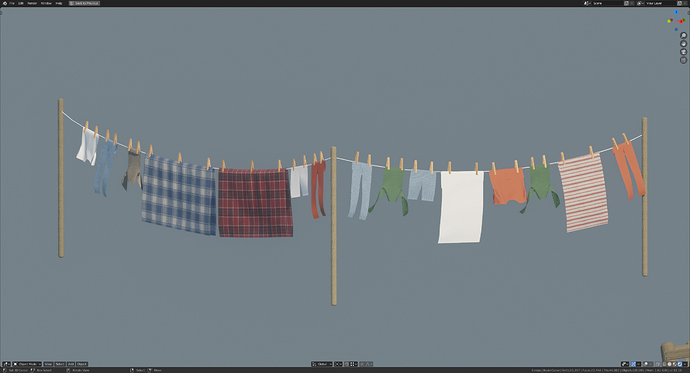 Hello Friends!
In the last days I’ve been painting the High Quality terrain for the Noam Town.
Let’s see the before and the after: 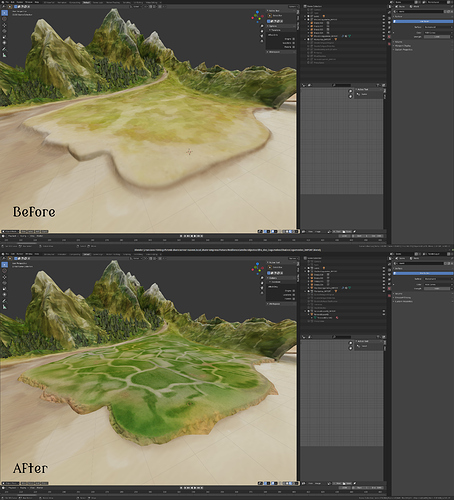 ResilienceSatelle|NoamTerrainPaint-v2.jpg3840×4223 1.8 MB
The new terrain is a 2nd object on top of the original terrain and it was painted with Armory Paint: 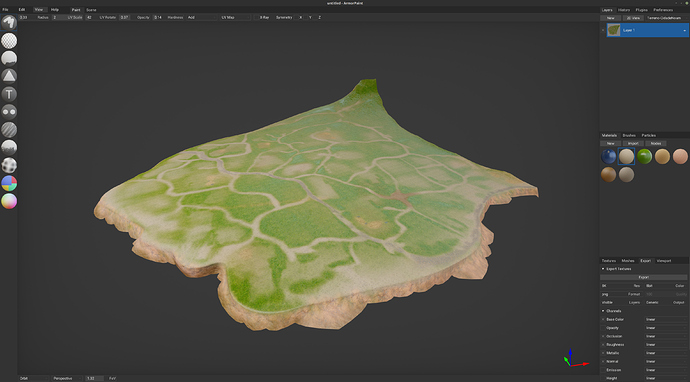 ResilienceSatelle|NoamTerrainPaint-v1.jpg3840×2129 765 KB
The decision of using Armory Paint instead of blender was due two main reasons:
1 - Armory Paint can paint materials (albedo, normal, roughness, ao, etc) and then automatically output all of those maps too;
2 - Armory paint can paint up to 16K textures in real time

(although I only painted them in 8K). 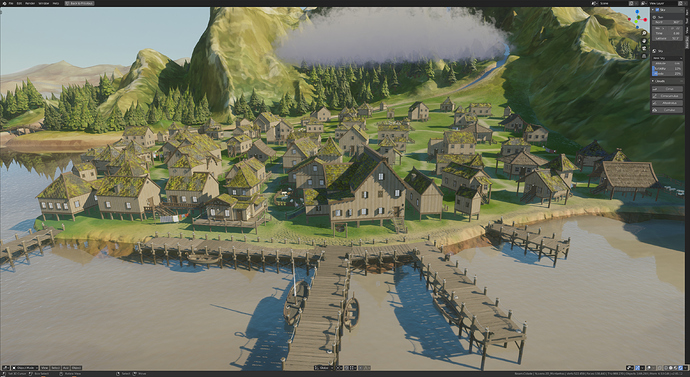 ResilienceSatelle|NoamTerrainPaint-v3.jpg3840×2099 1.79 MB
I don’t have enough power for 8K textures, so I’ve downscale them to 4K and the results are visible above.
Because this wouldn’t be enough to more close shots I’ve made two materials (both using the exact same shader, just different textures), one for the place the characters will walk and another for everything else: 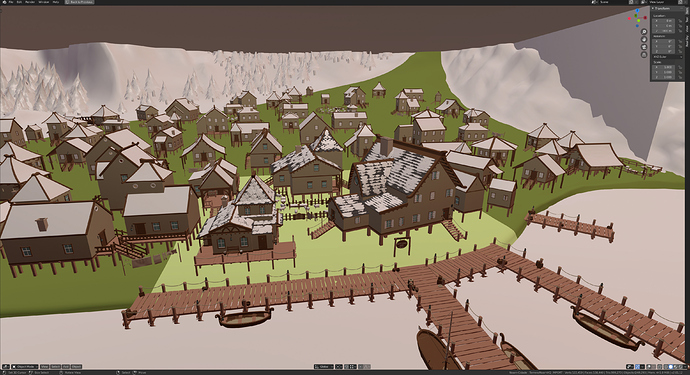 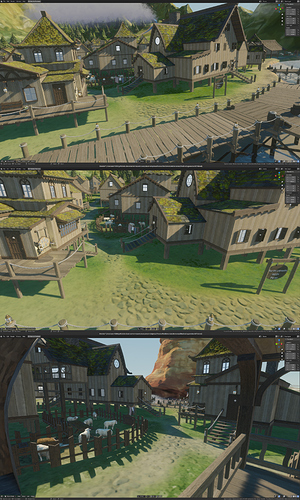 ResilienceSatelle|NoamTerrainPaint-v5.jpg2698×4485 2.82 MB
And suddenly we can get closer

Now in terms of paint this is good, to get better now it has to be done with real geometry, like grass and cobblestones, but that is another adventure The purpose of Resilience Satelle is to be sold once completed.
The ideal goal would be to pack it inside a physical container (a custom 16Gb USB stick) with as many extras as possible. (I’ll add this info in the first post once it’s sure).

) regarding a few questions that I have: 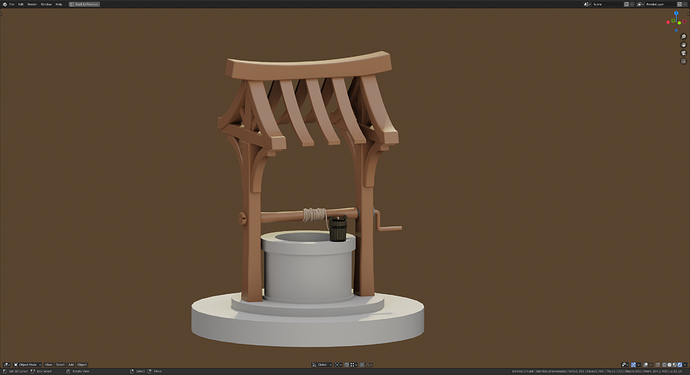 Today I bring you the village well. Tomorrow I make the roof and some details and it will be complete, ready to put on the scene.

steam is a very popular game platform, and in fact, i dont even know any other

they even have a bonus dlc type thing that you could offer up?

time constraints are a big player too, many of us find our selfs with some spare time, and thats the time we seek to fill. id buy the game if i could download it and start playing in the hour of spare time, but pass it by and find something else (probably forgetting it) if i had to order it.

factoring in replay value is another big consideration.

long story short, id say err on the side of lower cost and have an extras bundle as dlc, maybe with more game content. a common thing today is getting you in the door with a low cost game, then offering expansions as extra.

ps.
once released, do you plan to add updates maybe a few new stories? or sell expansion packs?

Thank you very much @Daedalus_MDW for taking the time for some words and keeping with us! You’re a Pal!

There’s itch.io too, but I guess steam is indeed much more famous. Then we have Google Playstore for Android and the App Store for the i-phones, I see no problem in releasing it for those too.

Here we have internet ranging from 4 mbps to 0.2 mbps (average is 1.5 mbps), therefore would take a week to download the project here… but you’re ultimately right, I guess that, in average, everyone is running faster. I don’t expect to sell much anyway (1000 copies would be my goal), so I could personally go to the post office to send the project, I wouldn’t mind to do that 1000 times if I had to

lol
…But that would be indeed more expensive due the need to pay for the usb pen it self.

No, Resilience Satelle when done will be done in the Gold… Rhodium

phase and there wont be DLC, although, if it does sell I can consider a Resilience Satelle 2… but I have more stories that I would like to make too, so no promises on that. Yesterday I finished the village well.
I chose aged wood to give it a more rustic look.
Today I will start a new object and I will post the feedback here.

I’d love to see this product on a platform like Steam too.

I see that Steam needs to be an option indeed.

Would be even more awesome if it’s available in VR

So far your project reminds me a bit of Allumette for some reason, a VR-app also available on Steam.

Do you consider that VR is taking off or it’s already landing?

Do you feel it has demand even in a couple of years from now? As soon Eevee gets the panoramic rendering it may be an option indeed.

I’m not sure to be honest. I have an Oculus Rift headset but I notice I use it less now than before. But VR is a great medium to tell stories and I bet the world you’re creating would look breathtaking in VR.

the issue with vr is the significant rendering cost, lack of good control scheme, and very expensive hardware requiring a whole room if maximized.

and the issue of panoramic vr is lack of depth, unless you render a left and a right equirectangular.

id love to get a pc vr headset, but atm its ahead of its time.

The Stereo equirectangular rendering also is on the to do list for Eevee, so we need to wait a bit more to see what will happen. I personally am not a big fan of VR, but because this is a 15 minutes experience it may work. 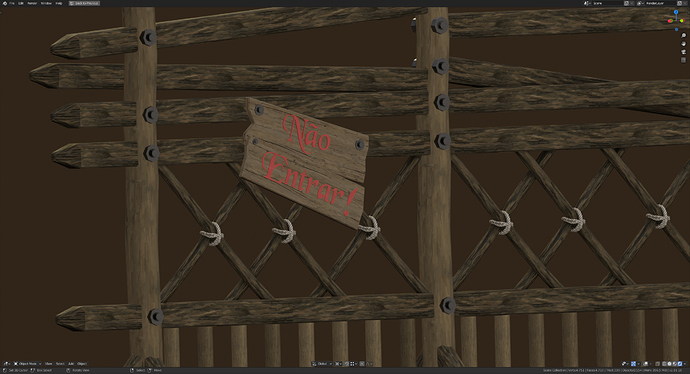 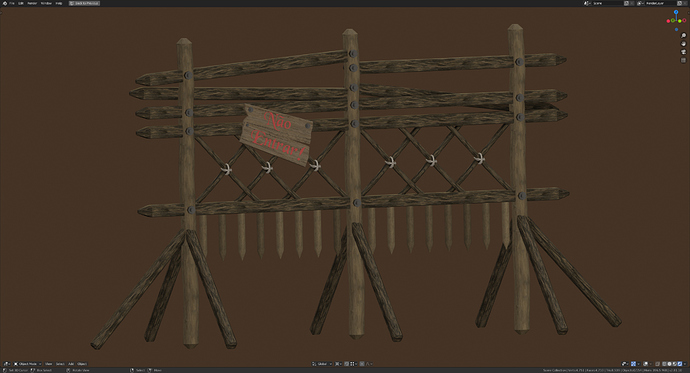 Today I started a new object, which is to block access to the cave, because of the dangers that exist in it.
I will put up some danger warning signs to make it obvious that it is a dangerous place to pass.
Tomorrow I hope to be finished and put on the scene.

…a few days ago

we had a a chicken offered for Resilience Satelle by my good friend and director of the short animation Curiositas @pajo Paulo Cristóvão. The chicken wasn’t painted but it had already a small animation made by Paulo. I painted it my self, ensured the animation would cycle and added them to the scene: We had tough in chickens here, but we probably wouldn’t want to have the trouble to make, rig and animate them, so Thank you very much my friend!