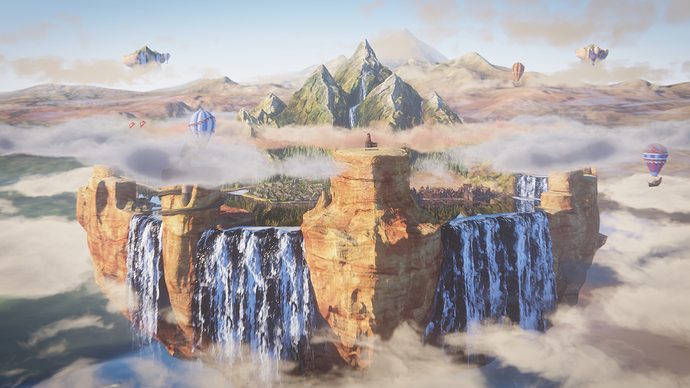 What is this all about:

…all happening while immersed in a fluid and gorgeous fantasy world as alive as life itself! Suitable to all family.

━━━━━━━━━━━━━⋆
Allow me to introduce you to the main characters: 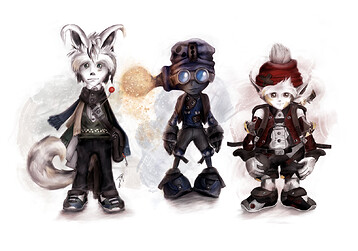 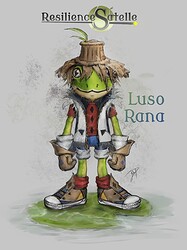 Moget and Noam are two kids living in two separate towns of Mushroom Island. Both of them feel unhappy. Noam has no arms, so he feels that could do so much more if actually had them; Moget lives isolated and believes that would be so much happier if he had a friend to play with. One day, both of them, see a shooting star (Shar) and wish to be happier. Shar senses the wishes and sneakily grants them, clearing the big stones out of the way, while keeping an eye on them, to observe if they can overcome the difficulties and learn, by themselves, the formula of happiness.
When they finally become friends, while they’re playing ball together, a young girl, Stela, drifts to the shore after jumping from a mysterious ship that crashes with the Moget town. After strong persuasion, she convinces Moget and Noam to join her on an epic Quest, through the 7 floating islands.

Who is making it? 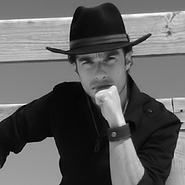 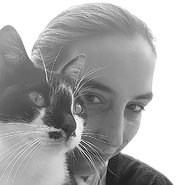 RutePerdizandArtur1120×1120 190 KB
Is mostly being made by me, Rogério Perdiz (since 2009), and my wife, Rute Perdiz (since 2019), but also with the help of a hand full of freelancers, from all over the world, that have been making tiny bits of it through the years. We are “ats” people… one likes hats and the other likes cats.

Here is a small Demo of the original soundtrack to get you in the mood:

It was composed for the project by Mr. Stefan Totsev and it’s already completed.


It’s based on the original concept from Mr. Daniel Thiele but all the fine details (ornaments, windows, lamps, etc) were created by Rute Perdiz that made all the modeling and the texturing of the asset.
The house was all made in Blender 2.8 and rendered in Eevee.

Noam, made by me, is in the scene for scaling purposes and to see if it “fits” the scenery

Please feel free to comment, we’ll read all the comments . 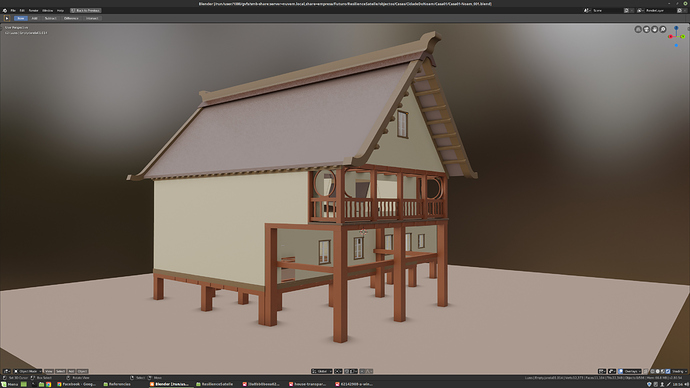 Captura de ecrã de 2019-05-01 18-56-50.jpg2560×1440 504 KB
Hello!
I am Rute Perdiz and I am doing the second house of the project, which is next to Noam’s.
The main look comes from the concept, but the ornaments are my own, based on several references that I have been researching on some styles that I admire.

Today I put the structure that supports the back porch and the windows in rural style.
I am publishing, day by day, progress.
Hope you like it !

By the way, this is the original concept we are using for all the houses of the Noam’s Town: 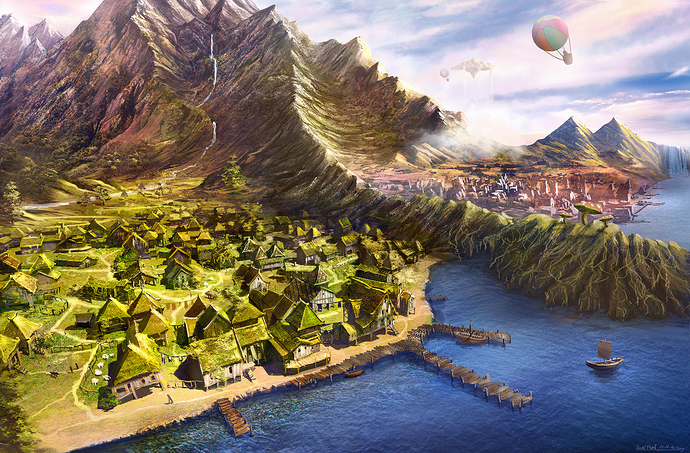 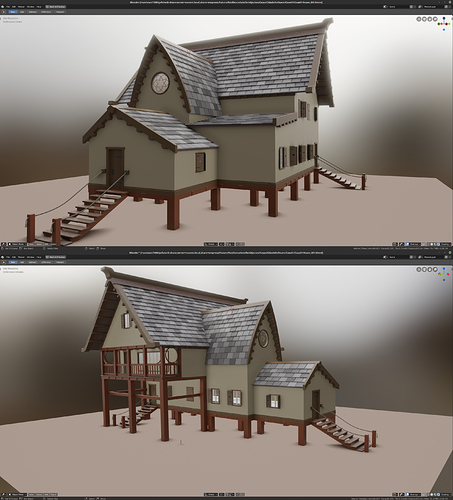 I am here to present another progress in the second house of the project.
Since the last time I have added the stairs that give access to the house, using the same style as the Noam’s. I also added the doors and in the circular window I decided to ornament it. I put together some shutters, with a personal touch based on some references researched.
The last thing I did today was the roof, which was chosen to be in square stone tile.
I hope you are enjoying all the progress and progress.

Hello friends,
Today here is a pose/expressions test for Noam: 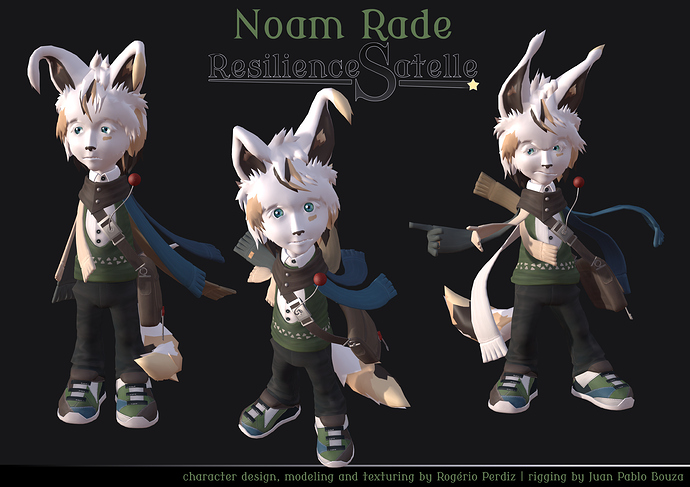 Who is this guy?
Noam is often found depressed due to his limited physical condition. He believes that is able of much more than it body allows, being consumed by a denied jealous feeling. Loses temper real quick and tends to loose the control under stress. His frustration blinds him, stopping him from see what he still can do, focusing only in what he can not… however under of all the darkness there is a gold heart that only needs a little of incentive to radiate happiness.

His mother made him some scarfs that act like his harms and hands, not like if they have muscles, but kind of magically… like if the wind gave them the right movements to enhance Noam’s feelings.

On the game he will be mostly involved on puzzle solving areas, but will also have moves of physical attack.

Noam is my favorite character… ever!

I just love this guy! 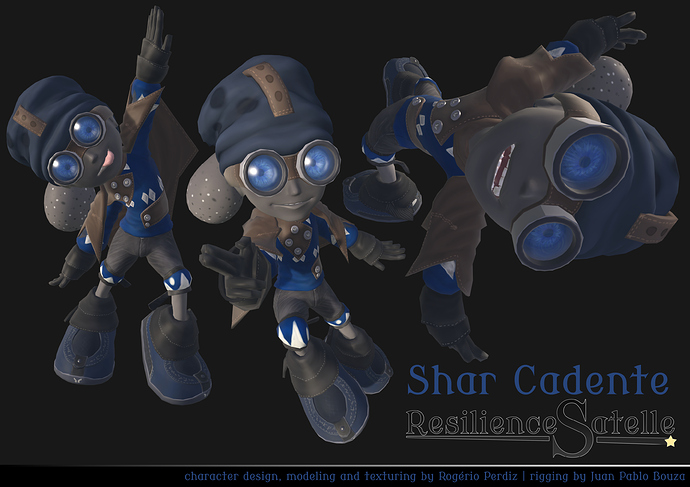 Altruist and a positive. He makes the most of his divine condition’s to, ambiguously, surf trough the night skies, searching for beings with difficulties. Thanks to his endless wisdom he easily finds solutions to every kind of problem. Life fascinates him and he can’t face sadness without doing something to help. Shar is a golden heart shooting star, that flies between the earth and sky, marveling all the existence.

On the game he will mostly fly

Shar was the first character I’ve drawn for this project. 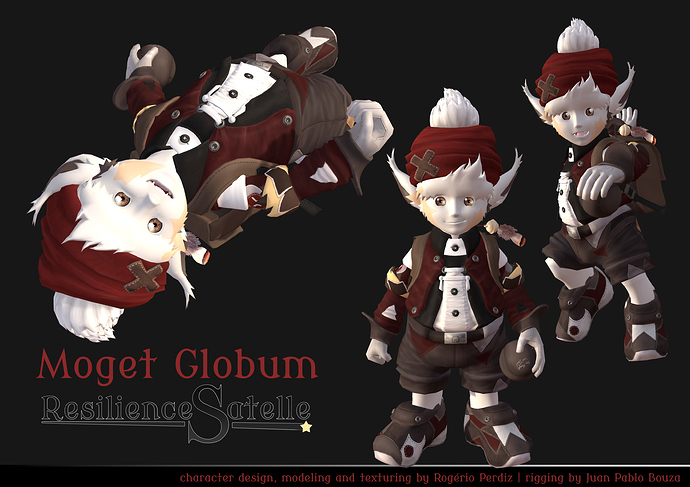 Lonely but always inspired and energetic. He pretty much stands on it’s own but misses some friends to play ball with him. He is strong and calm, but at the same time very sensitive when it comes to family values. He lov… ho wait!!! Loves his ball, being unable to let go from it more than 2 seconds.
He doesn’t frozen to fear and easily enters in a quest full of dangers if he considers that will improve is life.

Moget will be responsible for the platform areas, he can also trow his ball towards the enemies.

He his the most complex and most difficult to make character.

Hello again friends! The second house is now being textured. The UV mapping for all these woods is a bit time consuming, but it’s the only way to ensure that everything goes in the right direction.
Meanwhile allow me to introduce you to the amazing rig the characters have: 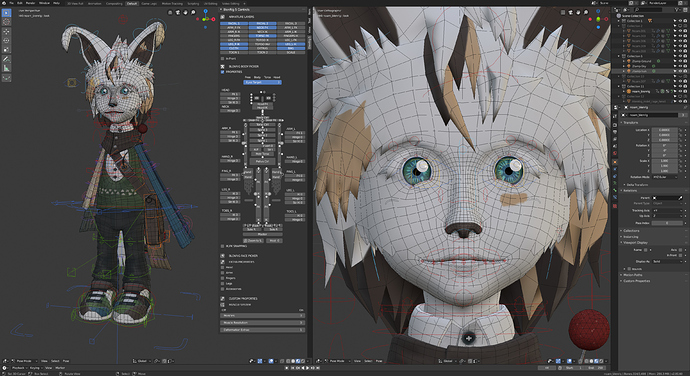 ResilienceSatelle-Noam_Rig.jpg3837×2091 2.25 MB
It’s based on Blend Rig 5 but Juan also added all the specific controls for each characters. It’s the most wonderful rig I’ve ever worked it! I never seen nothing as efficient and as easy to work with has this one.
Fortunately Juan made an update for blender 2.8 and now all the previous functionality and controls from the 2.79 version. 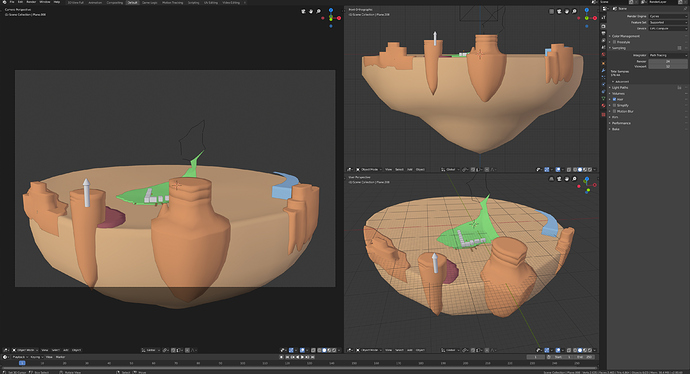 ResilienceSatelle-Island2DTo3D.jpg3840×2086 1.12 MB
The conversion of the Island from 2D to 3D has also started

So far the basic shape for the front elements are up.
Much to do yet… 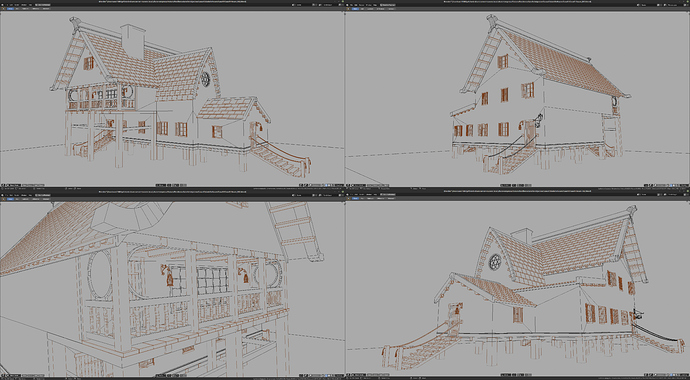 Hello again!
The second house is finished, but we have encountered problems with the textures, especially in the duplicates that are mirrored, in which the texture is darker, on Eevee (on Cycles looks good). Changing the Uvs always results in different looks. Since we are not able to come up with a solution, we will have to review the whole method of applying textures.
In the meantime I’ll move on to modeling the next house. 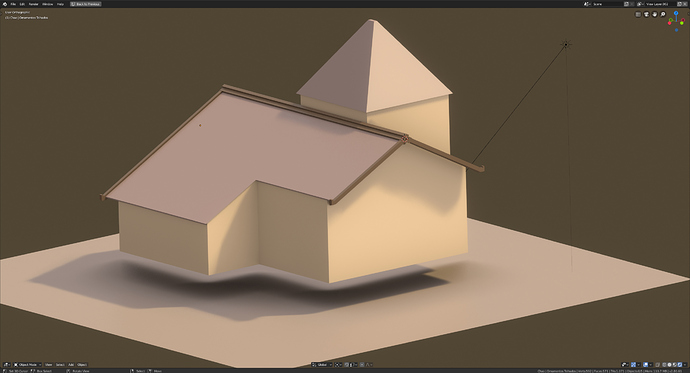 I started the third house of the project. The basic form and the measures have already been stipulated.
Tomorrow I will begin to decorate the roofs and put the support for the house.
Hope you like it!

Hello! I’m writing in the name of my wife that can’t post due the blocking rules for new users: 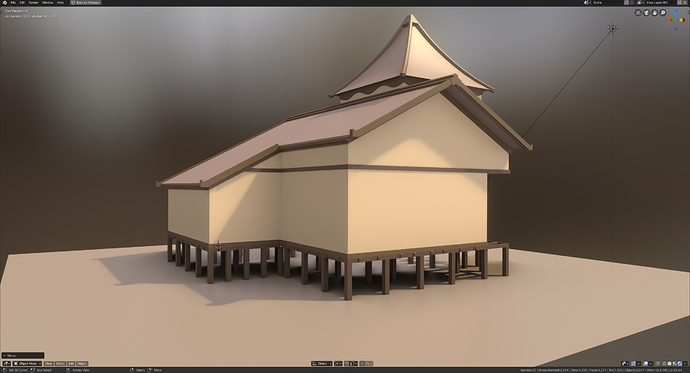 As promised here is another small evolution of the third house of the project. Today I finished the whole structure that supports the roofs, giving some details.
I also finished the basic structure that will support the whole house. Tomorrow I will stipulate where the doors and windows will be …

I hope you are enjoying it!
Best regards,

Hello Friends!
Today I have screens of the Noam’s boat that is being modeled by the BA member SlykDrako (Rui Teixeira): Based on one of the lousiest sketchs ever (made by me), Rui, voluntarily (translated: “we don’t pay him a cent for his awesome work”) converted it to the gorgeous 3D model you can see above.
It’s still on a W.I.P stage and final look probably won’t be this, but, following the philosophy of show all the progress, this had to be shown too

Noam’s boat!?
This boat was made specifically for Noam to travel from home to School.
Because Noam doesn’t have harms, it propels the boat using pedals (not made yet) that rotate the wheel on the back. It also has a third pedal for direction.

Tomorrow Rute_Perdiz will report on the house.
Until then
Best regards
-Rogério-

Rute_Perdiz has wrote (she still can’t post due to the 3 reply maximum on each topic for new users): 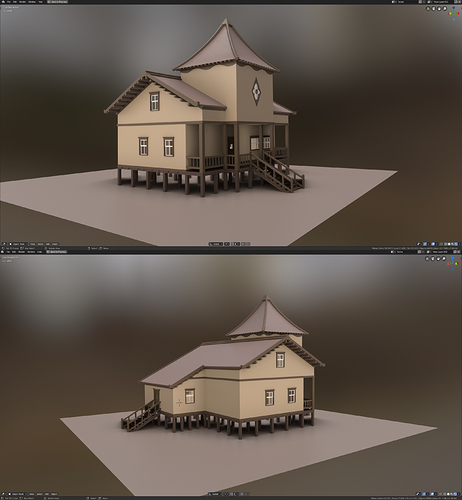 Today I finished putting the windows and doors, which will be made of wood. In the tower I decided to give a more ornate touch to the window.
Also the entrance of the house that is composed by a balcony is finished.
Tomorrow I will put the tiles and the chimney and in principle will be finished, ready to texturize.
Hope you like it… 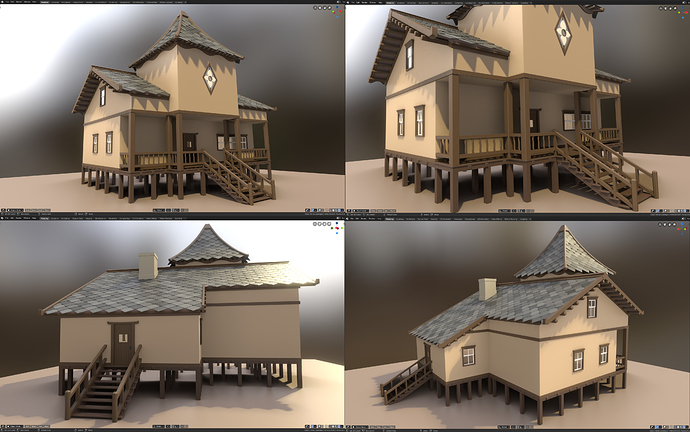 Hello everyone!
Today I finished the modeling of the third house of the project.
We opted, on the roof, for stone tile in the form of “diamond”. All of them were placed with instances, one by one.
The chimney I opted for something simpler so that the house is not exaggerated.
In the meantime I will move on to modeling another house until we find a more effective and simple texturing method. 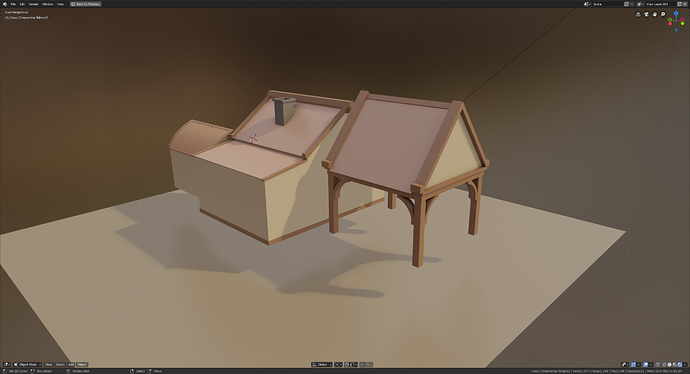 Today I started the fourth house of the project.
I structured the plan of how it will be. However, there are only roofs and walls, but Monday I hope to make the support for the base and decide where the doors and windows will be.

On the materials/textures department:
My goal for this project is to have everything looking like painted by hand, similar to the concept paints or my own paintings

The original plan was to have a dedicated person to 3D paint the objects by hand, but that turned out not to be a realist option.
I’ve then considered just to apply some filters of Gimp to the textures and go with that… but that doesn’t seem to be the ideal solution, specially because it’s hard to make changes to them, they tile bad and they just look too much 8 bit videogames when up close.

After talking with SlykDrako, I’ve decided to keep the materials realistic, for now, and only in the end apply some magic stuff, on the compositor, to blend the colors a bit and make everything look more close of the desired look. 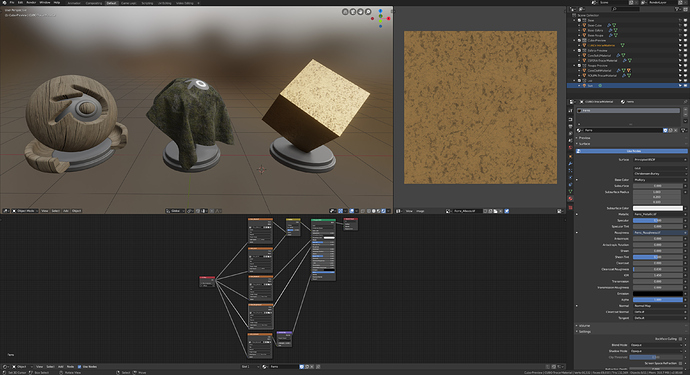 Today I’ve placed the support of the house and decided where the windows and doors would be. This house will be a little simpler than the others because it will not be in the focus of the animation. Tomorrow I hope to have finished the modeling and the adjustments to then proceed the texturing.
Hope you like it!
Best regards,
Rute Perdiz ResilienceSatelle-GameplaySchematics1994×1755 300 KB
Hello friends!
These are the planed gameplay controls for Resilience Satelle. They will cover all the interactivity for this project in both Arcade and PC versions. Both versions will feel identical.
Best regards
Rogério
3 Likes
next page →