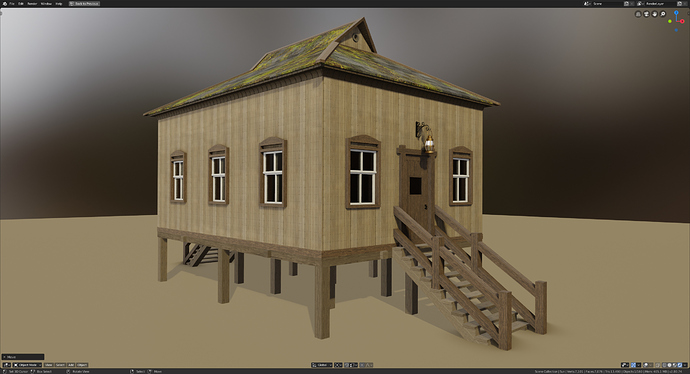 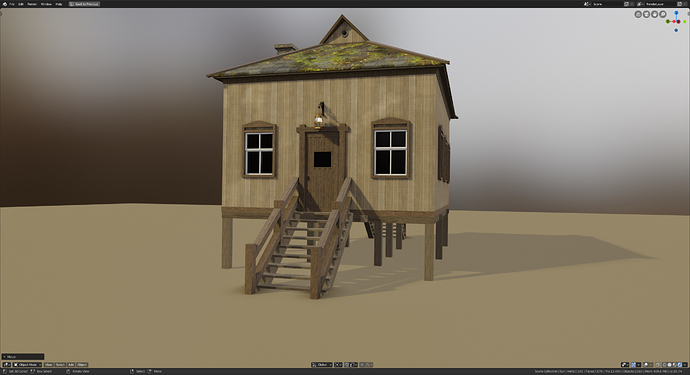 After all, I was able to finish another house today. As it was modeled with mirror, it became faster to finish.
Tomorrow I will return with another new one.

I see, its good to hear that you are used to working on big projects. I am really curious in how you are going to implement the interaction parts in to the movie. Looking forward to it!

The current plan is to render video cubemaps of the shot (Eevee can’t render 360º, so we’ll just film 6 times the same thing from each side of a cube), pretty much like normal filming.
Those cubemaps will serve as background and also light emitters.

I’ll then add the characters on basically an empty scene (we made just that for these awesome people website) and, using a game engine (Armory is my first option and as failsafe Unity), create the movements and controls for the characters, that will interact only with simplified geometry of what is visible on the pre-rendered background 360º video

The cubemaps allow just a bit of movement before the illusion breaks, and it’s still to be determined on how to solve the situation if the player just decides to stop or don’t get that it has to do something as what is running on the background is basically 360º video.

There will be a minimum of 3 interactive areas and a maximum of 8 depending on how well everything plays.

Thank you very much! You’re a Pal 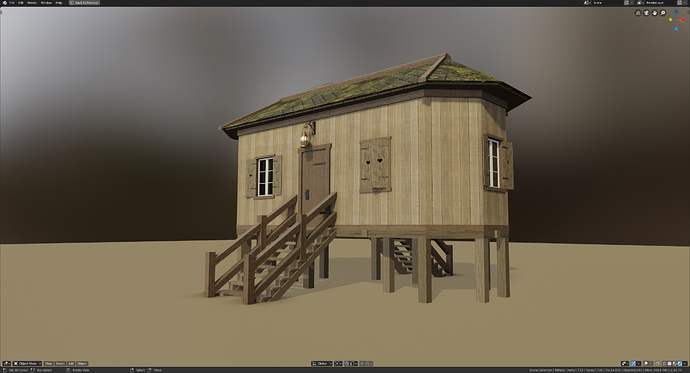 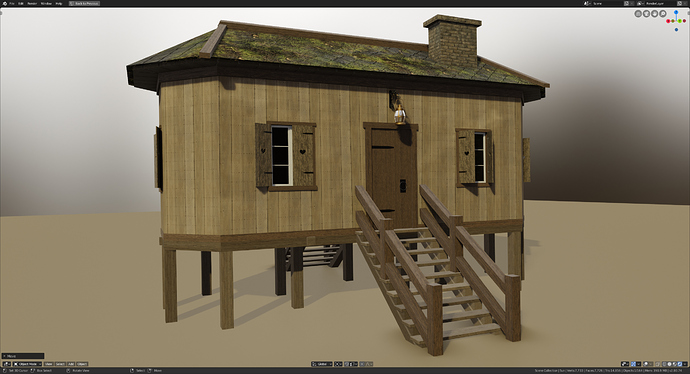 And so I finish modeling houses for this city.
Monday will start with other props and structures that make up the scenery of this city.
These last two houses were my own, I did not follow the conceptual art since they will be houses for just composing the scene. 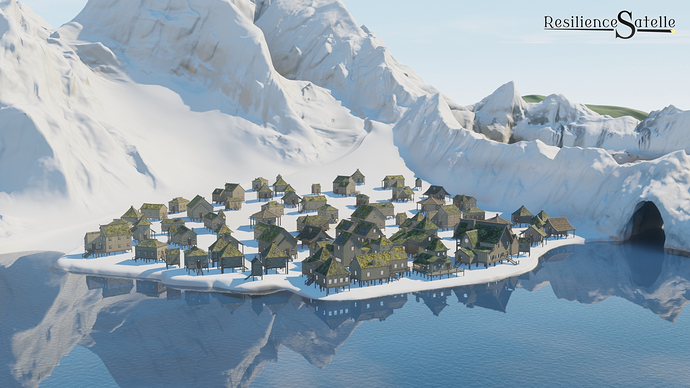 ResilienceSatelle-NoamTown-AllHouses.jpg1920×1080 1.03 MB
…And all together the town looks more or less like this Today I started the study of what will be the tower that is in one of the stone mountains of the scenery.
It was not easy to get a sense of it but I think that starting from now, it’s just going to be gathering details.
The idea will be to make a kind of port of entry and exit of hot air balloons.
I hope tomorrow will have much more to show you!

Just saw this, and I love it. Looks like a ton of work has been put into it. I love the concept for Noam, took me a while to realize he had no arms lol. The idea of overcoming limitations no matter your situation is great. I will be looking out for it when it’s done. Keep it up!

Thank you very much for your kind words CitizenTurin!

Noam is that one character that I most enjoyed creating! Before him my characters kind of decided how they wanted to be

…but with this version of Noam I was finally able to make him exactly like I intended. He is the main guy, although he may be a bit naughty in the beginning, he is the Story.

I even first made Shar, them Moget and saved Noam for the last because I knew that it would be the most difficult one to get it right

Disguizing the fact that he doesn’t has arms was always one of my main priorities, I’m very happy that it did work out hehe

Until next time! Thanks once again! Today I bring you the tower completely modeled and detailed. It took a while because round objects are still a bit difficult for me, but I was able to do what I had idealized.
Tomorrow I’ll start the whole wood walkway. This zone will be more time-consuming because it has many elements that need to be modeled.

I Hope they’ll implement the Equirectangular settings to eevee before you finish the project. Would be easier than having to render every frame 6 times

Have you looked in to Godot-Gameengine? Could be an option too.

Equirectangular rendering:
Yup, it would be a lot easier hehe!

The issue is that I’m a lousy programmer, so I rely on Visual coding. The Armory coding nodes are the ones I can work with and understand their logic very well… all the others fell less natural to me

I mentioned Unity because I’ve worked with it many times for my clients and will have visual coding soon.

A few more screen shots of the tower details. To complement the ones that my wife shown yesterday and present all of the awesome work she made on it Today I bring you the wooden walkway which, in my opinion, was quite difficult to come up with in a way that could work. I initially started by trying to do everything by hand, but it proved more complicated and time-consuming. Until we came to the conclusion that the best way to work would be to construct a considerable part and make an array that follows a curve. Then it would just adjust. And so it was!
I also started the boarding house. I still have some details to finish on it. 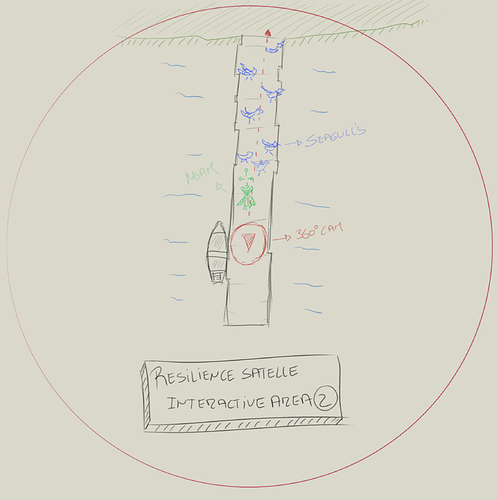 One of the interactive shots plays more or less like this:

After an evaluation we thought the wooden walkway should be different. As it was before, it would be a very big climb up to the tower, so we took another turn so that the passage was more right and more meaningful.
Today I finished the boarding house and modeled the towers where the kites would be placed. Tomorrow I will make the fence that circles the top of the mountain and a few more props.

always impressed when i drop by, great work guys! dang i really love the bridge to the tower

but just thinking aloud for a sec, graphics rendering and computational power has made some leaps in recent. trying mess with getting a rendered video to work maybe shooting yourself in the foot…

lets think on a few things, the smallest tweak to a background object could potentially mean rerendering many frames, and not to mention keeping track of all the frames needing updated.

also, video files are no small thing. in fact, one of the big reasons we have RT cutscenes today is a simple matter of not being able to fit on CDs. then imagine having to render with sufficient resolution and compression to make it look good.

it very well may be easier to bake assets into a low poly and just 3d render. even you have said the challenges of figuring out how to manage a 360 video. between figuring out where the player is and allowing sufficient movement not to cause distortion, just making the scene actually 3d makes good sense.

finally, having the video frame controlled presents a issue with idle animations, when the player is still, even for a moment, the waves in the water would stop, the grass cease to wave, heck, even sound effects might not line up.
having 3d scenery instantly mashes all those issues, and distance scenery could be a video 360 on a loop.

Hello Daedalus,
Thank you very much for taking the time to make such an awesome comment!
Hehe I’ll tell my wife that the bridge is being loved

One thing that annoys me the most is knowing that not everyone will see what I want to show to them. Even on a youtube video, some people sees it at 240p and others at 4K depending of their internet speed. I want that, no matter if you have a raspberry pi 4 or a Titan RTX PC, you’ll experience the exact same thing.

What I’ve wrote is the main reason that I even tough in this method.

Now, you speak the truth, in every thing you say. I spend all days thinking on all the problems and difficulties you mentioned… didn’t find really a proved to work answer so far

Most modern game engines can run about 10 million textured triangles in real time on a NVIDIA 1060 6 Gb of ram (I’ve worked on such a project, a bicycle simulator)… so far we don’t even reached to 1 million, so most surely we could load this all, like it is, without any further modification (well perhaps in textures, some have complex node mixes) and it would run fine.

Things the prevent me to do that:

I have an open mind and I am always searching for new approaches, so this ain’t locked… I just need to follow a path to a goal.
My goal is to make something more close to a movie than with a game, but, if the road proves to be very bumpy I may need to turn on some other direction. For now this one is working 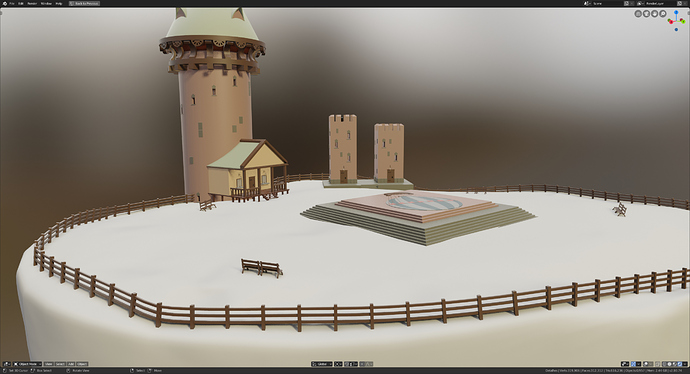 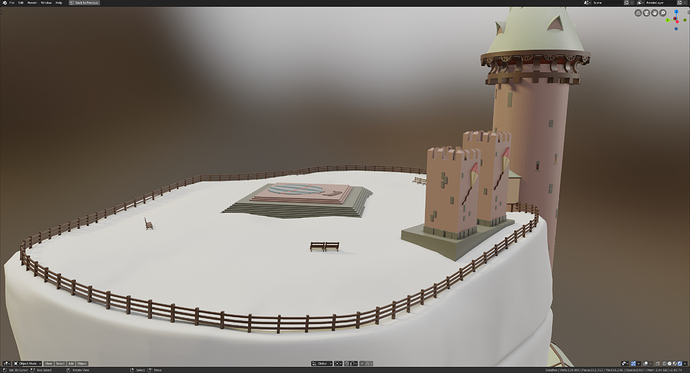 Today I made the fence around the top of the mountain. Here we use the same method of the wooden walkway, I modeled a small part and we used the array that follows the curve.
I also made the base where the balloons of hot air land.
In this zone the modeling work is almost finished, I’ll just do a few more details and then start texturizing.

Today I do not bring you any developments made in the project, as always.
Today I write to let you know that I am taking a break because a more urgent project has appeared and that needs my work.
As soon as I can, I’ll go back and continue.

We had a big project green lighted for production.
It will take at least a month to complete, so meanwhile the Resilience Satelle project will be paused.
We’ll get back as soon we complete the project. 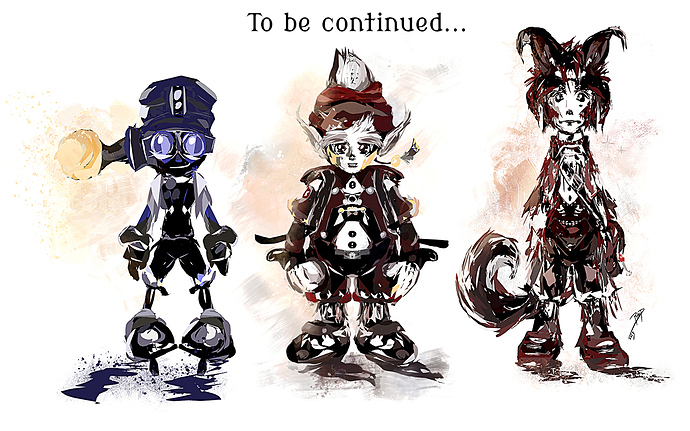