First round of images from my latest work : Environment art for the PC 1st person puzzle game “Rewind”, out on Steam on the 31st of March , by Stubborn Horse Studio, main dev. Rachel Cordone.
Software used is Blender for modelling and uvs, Cycles render for skyboxes and background, Substance painter for textures.

My part was to develop the full env art kit for the game, about 3,5 months of work, starting from a white box layout (very important in this case, being the puzzles dependent on the shapes and dimensions of rooms) For look-dev , i had a small kit of assets from the prototype version and guidelines on design and style, but i did concept work for most of these assets, and that’s a part i always greatly enjoy.

The project was started in 2012 in UDK, so what you see is not PBR shading (even if most in this post is Substance painter screenshots) , all assets were made with spec/gloss textures, but the engine has different calibration than today’s pbr , and the ‘image reflections’ system used is similar, but a precursor of now commonly used probes and ssr.

I also did the full level building of 2 maps out of 7 , of course ‘full’ being relative to env art, but including lightmap, collision and all the practical testing of your assets … Those not so trivial things like making sure that your super fancy sci-fi corridor with hundred of pieces actually can tile seamlessy around a 90° curve :D. Kind of important.
And just what i needed, since i recently worked more on single assets than levels, but you need to have experience in building levels anyway, to make best possible assets for level builders.

Being an indie game, this approach of making small modules that could have maximum reuse and flexibility was fundamental, and on the same line, the outdoor natural elements are a perfect subject for that and helped to give some variation. 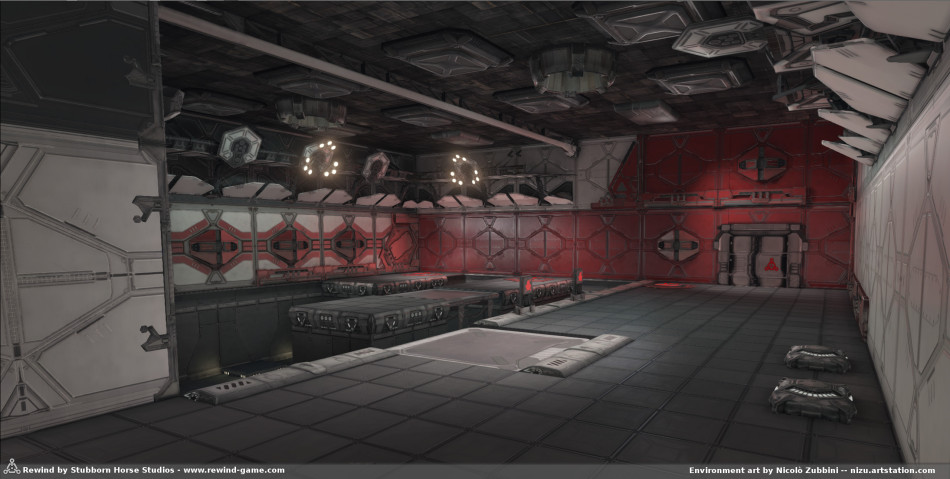 wallmodules-wip.jpg?w=950950×534
Design steps of the base wall modules, while the core design remained the same, lots of small iterations were necessary to get the right color balance within these tiles and consequently in the rooms , with bold colors for accent , white as default and grey for non-gameplay-relevant areas.

ceiling-tech.jpg?w=950950×534
Greeble. Of course, and lots of it. But only on ceilings, because being a puzzle game one had to be careful with cluttering the floor and walls , confusing player or even breaking gameplay, so i kept it simple and -almost- only placed big ‘freeform’ pieces of decor on ceilings.

basewallmeshes1.jpg?w=950950×440
Texture sheet and lowpoly pieces in Substance painter next to final kit of meshes, derived from these (and base wall textures) …Clean scifi is inherently quite abstract, so there’s a huge potential of mixing and matching to create variants of assets .

rockcliffs.jpg?w=950950×490
Some rock walls, sculpted in Blender, textured in Substance painter. Also Meshlab came in handy with quadric edge collapse for quick ‘retopo’ of rocks. And i used Meshmixer (i know it’s A.D. i wasn’t happy either to find it was better than Blender for this) proved to have great reliability for boolean operations on hipoly sculpts, Blender booleans failed because the resulting mesh topology was too bad to do a further pass of decimate/retopo on it.

rockcliffs2.jpg?w=950950×492
Full kit of rocks for the game, All by me except the 2nd row, which i just retextured from a stock kit. In the end , it was quite important to have plenty scale variations with specific models, but Substance materials meant i could texture quickly, and also the original base sculpt is the same for most , just ‘remixed’ and joined differently.

door.jpg?w=950950×536
I enjoyed working in the clean sci-fi style of the project. There’s some amazing inspiration for this kind of style (Ron Cobb’s original Alien always, and Sparth’s designs for Halo of course), easy to overlook in favor of more peculiar style, but with less dirt than other looks, you get to play with shapes, geometry and their composition.

corridor-module.jpg?w=950950×434
this is the base module for corridors connecting puzzle rooms, it was a great subject for modular env design , starts as a flat wall module with some relief … then came alternate paneling (glass or opaque) , removable pillars, another kit for matching countertop ceiling … and the dreaded 90° turn modules.

wallplates.jpg?w=950950×495
the blue and red accent walls are part of the game story, but also became a design element, corridors and ‘pits’ were all colored in shades of grey with a hint of warm or cold tints.

flowers.jpg?w=950950×524
This is a special vegetation item , for which i started from scratch , using 2 levels of particle scattering and dupligroups to create bushes (from the size of field flowers to small trees) and it was important to have full control and quickly iterate to get the right density of leaves and flower for … well , i can’t say , that’d be a spoiler …

meshmodelling.jpg?w=950950×524
a sample of the normal asset workflow : lowpoly and hipoly chunks , exported to substance , then texture loaded back in Blender to create addtional ‘derivate’ assets using those maps and pieces of mesh.

mountain-b.jpg?w=950950×524
Sculpted island view for menu. Besides the skyboxes rendered in Cycles, this was used for menu by doing a camera projection mapping.

More at my blog : https://nizuvault.wordpress.com/ 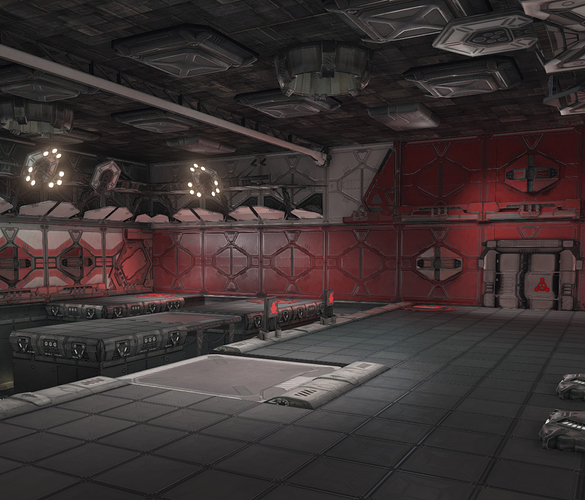 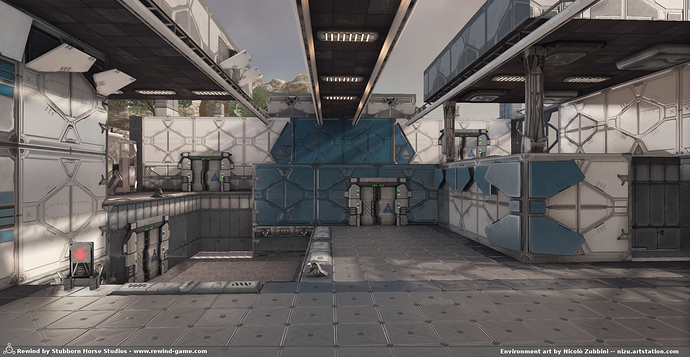 Looks great. Especially the island. Looks man made in a way.

This looks fantastic and like it would have taken a lot of hours to get juuuuuust right. Good stuff!

Wow!.. that’s a lot of work! So, this is roughly 4 years worth? I hope it does well on Steam, it looks like a lot went into it.

Technically this was made as a sculpt over a composite of generic real world heightmaps, due to time constraints i didn’t get to research the last step of adding some erosion simulation to refine the sculpted parts (i wanted to look into World Machine many times in past projects, but was never enough of a priority vs. what you can already do with those tools in Blender without addtional scripts…), and just used a particle system to place a dense enough cover of trees.

Xraygunner : Thanks, ah no , i see the ambiguity

, it’s 3,5 months of work from me, the start date of 2012 refers to the project in general which started as a personal side project of the main dev, who started creating the logic and concept for the puzzles, then only recently put the demo to Steam Greenlight , got good response, and decided to develop the full game, as a indie game , with a fairly quick total playtime actually .

I see… still looks good. Three and a half months of work and getting what you’ve got is pretty impressive.

Thanks, speed was an important factor … it’s my 1st commercial project using Substance … and it was a significant speedup.
I had previously discovered procedural texturing with V1 of Quixel’s dDO , but being based on PS, it seemed a smart idea to try and reproduce that workflow in Blender node editor , i did some progress on that, and used only Blender for some projects last year, it worked better (at least in some key aspects) than v1 of dDo, but when Substance became popular, it was too tempting, not so much for any crazy advanced feature, but because it’s all already setup and ‘works out of the box’

So when the time came to re-think, organize and prepare some scripting and a talk about procedural texturing … i did the math, and realized that it was too inconvenient to do that , vs. just getting a Substance live subscription. Yes, bummer, but luckily there’s a few artists out there , more technical than me, working on procedural texturing using Blender only … I couldn’t get to do it myself, but imho, it takes not much work to ‘hijack’ Blender baking and compositing to do just the same as substance ! If anyone reading this is working on such addon projects, please post or msg, i’d like to keep an eye on those !