RIG QUESTION:Double Unrolling on Scroll - Simple or Not :)

I’ve been experimenting with curves, and I’ve found out very difficult to achieve such a simple thing like unrolling effect on scroll. For example check this tutorial - https://www.youtube.com/watch?v=zmyjT5XM6aA

I’ve been experimenting - with curves (shape keys) however I achieved the effect, but I spend lots of time trying to find a way by hooking the thing, I’ve try also with bend + lattice modifier…

but I’m still wandering is there a way to simulate this effect like in real world, for example like cloth simulation, also what if the paper is attached to some objects (something like this wooden holders - http://www.turbosquid.com/3d-models/…-scroll/907160). Or what if there is a inner force generated - https://www.youtube.com/watch?v=qvFN-DFnFto).

I think this goal is simple but the same time very tricky. I will appreciate any feedback, tips, advice just everything about how this effect could be achieved aside from “curve shape keys” like I did it. (https://www.youtube.com/watch?v=zmyjT5XM6aA 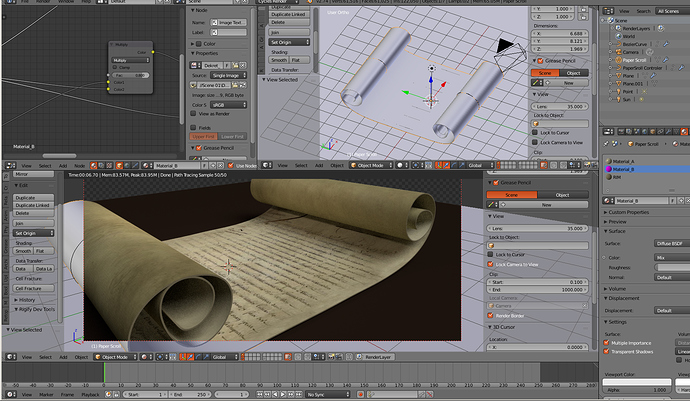 Actually simulating the paper wound around rollers would probably take quite a while, because you’d likely have to raise the quality of the simulation and collisions very high. I wouldn’t be surprised if there were still issues with the paper colliding properly with itself when it’s wound around the roller several times, too.

I’ve never used shape keys, though, so I can’t comment on whether they’d be helpful or not.

My suggestion would be to manually animate it once and save it as an action, and then use an action constraint (http://www.blender.org/manual/rigging/constraints/relationship/action.html) to control that action in the rig. If I remember corrrectly, this is explained in the finger rigging part in humane rigging, but it has been a while so I may be misremembering.

The alternative would be to look at the finger rig in rigify which does curling/uncurling and create a version of that but with more bones to get a smoother effect.