Hello Everyone, I’m making a rig in Blender 2.5. The main controls are pretty much done. It definitely still needs some facial controls and I think it should have some way to switch between independent(hinged) legs/arms/spine and having them follow the hierarchy’s rotation.

The blend file’s attached. Also check out the version with a spline ik tail : ) it’s fun (see post below).

Hope you like the rig so far. Crits are welcome.
Thanks for having a look.

edit: I finished a tutorial series on how to rig the legs. Here’s the full list (6, 7 and 8 are the new ones):

Video 01: Overview of the rig. (Skip this if you want to get straight to the meat of the tutorial).
Video 02: Making the armature and setting up the inverse kinematics.
Video 03: Setting up the foot roll control using action constraints.
Video 04: Tidying up the rig and making it look good with custom display shapes.
Video 05: Making the rig hard to break and final wrapping up.
Video 06: Knee Control.
Video 07:Foot Tumble Control 1: Creating the bones and animating the action.
Video 08: Foot Tumble Control 2: Setting up the action constraints.
Video 09: IK/FK Leg Switch 1: Inverse and Forward Kinematics.
Video 10: IK/FK Leg Switch 2: Drivers. 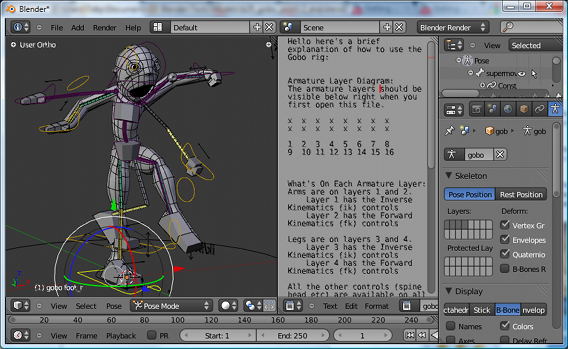 You did a very good job here.
I suck at rigging and your videos are really instructive.
Keep blending

These tutorials are fantastic, well paced and clear, thanks for your efforts

this is the best (specifically)2.5 rig I’ve seen to date, now if only it had some of the new spline-IK that aligorith coded in(constraints), not that it needs it per-se, just would be cool. Great job though, very though out design and implementation, thanks for sharing the blend as well.

Thanks a lot for the tutorials they are very informative. Do you know how can I make the foot rig strechy ?

Wow I haven’t checked here in a while: thanks alot for the nice comments : ).

First: I updated the rig in the original post to work with the Blender 2.5 Alpha 0 that came out yesterday or the day before. So you can download it safely again (duno if anyone noticed it was broken). None of the drivers or action constraints worked cos it seems the way channels are addressed using rna strings has been changed to be more succinct (or something like that). I just had to reassign the drivers and redo the actions.

blenderificus: Yeah that’s a really good idea. I really wanna give him a tail now : D But I don’t think I’ll have time for a while yet… That’s definitely on my wishlist now though.

r9onaldo: hmm, well if you can find thigh_fk_l and shin_fk_l in the hierarchy then go to the constraints panel, open the Inverse Kinematics tab at the top and then set the stretch slider to a small number (0.1 seems to be what’s used in other rigs) then that’s the foundation of it. You have to set it for both of those bones (and their respective _r mirror images). But the deforming bones won’t respond to the stretching yet, you’d have to set up some copy scale constraints on them or something (similar to the copy rotation constraints on them at the moment, they’d be blended between ik and fk using the ik/fk switcher as a driver on the influence of the second constraint). And I think you’d still need some way of compensating for the scale in the x and y axes of the bones (possibly using stretch to constraints). Aaaand it’s all getting a bit complicated and you can see why I haven’t implemented it yet : ) Feel free to have a crack at it though, post any interesting results here if you like.

Again thanks for the comments!

Hiya I couldn’t resist following up on blenderificus’ suggestion of using some Spline IK in the rig so I added a tail : D

The blend file for the spline version is attached to the original post.

At the moment Spline IK has to go in a separate armature to the control armature because of something to do with the dependency graph. 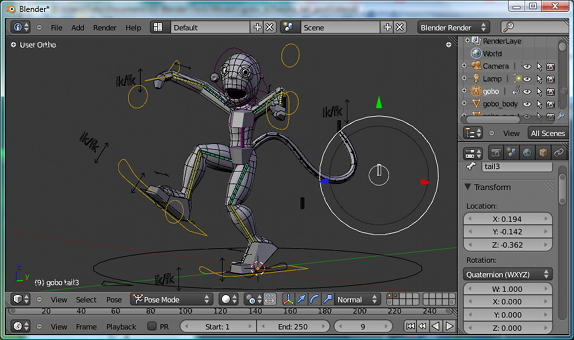 I gust love your tutorials, theyre so helpful!

I have a question though that is probably very simple to answer. Why do alot of rigs I see have both IK and FK. What’s a FK and what is it for? Do you use it to help animate or is it just a simpler version of the IK? Sorry if my questions are too unspecific.

Strawberries: That’s a very good question. I couldn’t get anyone to explain it to me for ages. Anyway, here’s my explanation…

In a word: FK (Forward Kinematics) is good for arcs. IK is good for making the end of a chain of bones stay in one place. You can animate either the FK or the IK controls depending on what kind of motion you are trying to animate.

Here’s an animation on youtube that uses both.
The purple leg is controlled by Forward Kinematics and it’s endpoint follows a nice arc.
The green leg is controlled by Inverse Kinematics and it’s endpoint stays pretty much in one place.
(Ignore the bendyness, that’s nothing to do with FK or IK. The motion of the endpoints is what we’re looking at.)

In a word or two:

To see why riggers go to all that trouble just for some arcs, if you scroll down a bit on this wiki article you’ll see arcs listed as one of the principles of animation.

On the other hand you can get nice arcs using Inverse Kinematics, just by adding in a few extra keyframes and I’ve read animation blogs of really good animators who say they almost always use Inverse Kinematics. But it’s good to have the option in a rig. I think it would have been difficult to do that kick animation without Forward Kinematics.

Thanks for being a pioneer with 2.5 – this is a terrific tutorial!

whoa, spline IK tail, very cool! thanks as always for sharing the blend and tut vids on youtube.

A nicely made rig. I haven’t had the time to look at Blender splines as yet… your ones look like external magnet type, yet my work in Maya indicates I should be able to have a hoop controller right around centre of the curve… not dragging around the outside… not sure if that’s clear? Something like the taik goinf through hoops, and wherever the hoops go, the tail loops through them.

Lancer: Yeah I see what you mean, so the control points actually lie on the curve. That probably would be a good idea. Like the Edit Point (EP) curve tool in Maya (I think). I had a quick look but I couldn’t find an option for that in Blender. Does anyone know if it’s there?

Fruitlessly I have been trying to find a tutorial (video, pdf or online) about the IK/FK Swith you make for the legs. It must be a procedural but how do you actually build it? Do you have any links to some great tutorials?

Thanks in advance and Regards

Hewi: I’m just putting a tutorial together now. It’ll probably take quite a while to upload to youtube, but could be up as early as tomorrow. (Sometimes YouTube refuses to upload the vids I make with camstudio grrr, so fingers crossed).

looking forward on looking at them,

BTW, if you are taking requests… It would be cool if the hand had three fingers and a thumb instead of a mitten…

The IK/FK Switching tutorials are uploaded now. There are two parts.

BTW, if you are taking requests… It would be cool if the hand had three fingers and a thumb instead of a mitten…

Yep I’m taking requests. I wanna make a rig that everyone really likes, so requests are definitely welcome. 3 fingers is now on the todo list. Thanks for the input : )

But… because I’m probably going to remake the whole rig when the final version of Blender 2.5 is released, I might save some changes (probably including the extra fingers) until then.

But… because I’m probably going to remake the whole rig when the final version of Blender 2.5 is released, I might save some changes (probably including the extra fingers) until then.

Makes sense, actually… I was wondering about that.

Thanks for tackling this. It has been very helpful!

Well, sorry guys if I will have to be blunt, straight forward and to the point BUT

In my opinion, the tleave2000 tutorials are the BEST around, if there would only be a reward for fantastic effort like his.