So here’s the story from start to where I am now.

I use blender 2.75a because it runs better on my laptop (i’d upgrade in a heartbeat if you guys think that would solve this.

I’m remaking a model I made in early 2015, back when I thought the decimate modifier was ok for game characters. It had so many ngons that I just decided to remesh the high poly. I used the mirror mod to cut worktime and any unnecessary struggle. When it came to baking is where I encountered my first issue. Though I applied the modifier and unwrapped things it would only bake parts of the normals (ex: the head, an arm and the body) I eventually overcame this by remove UV map and then unwrapping it again.
Things went fine for a while but when I pressed play …part of it just…vanishes…it looks like it tears.
I made sure all the faces were facing the right way, no overlapping and backface being turned on only makes things worse

Or even better: ctrl+n to make normals consistent. 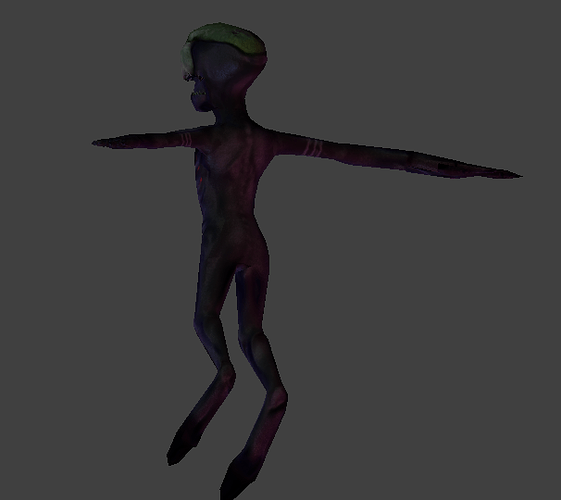 Ctrl+N in edit mode still seems to get some ripping. Upon close inspection it looks like I’m just getting blackmarks on it’s chin etc o.o

tried first option. It made the creature look backwards when I pressed play. It’s on opaque.
you mean removing the head? or adding rigging?

I think I solved it but it’s aggravating when I fix something without understanding.
I duplicated the item, made it single user and re-added my textures …

looks like doubled geometry. try adding a triangulate modifier. some modifiers cause materials to bug out, solidify for one.

make sure the objects scale is 1,1,1. ctrl-a to apply transforms.

I think it actually turned out to be a bug on blender’s behalf. (sorry for not posting to this thread for so long.
But what I ended up doing was duplicating the mesh, made it a single user and all the clipping, cutting weird nonsense stopped!