Hi, I’m trying to make a robot, but I still don’t know where it will bring me.
I would do a sphere that can open and arms and legs get out from the shell.
This is the first try of the shell. 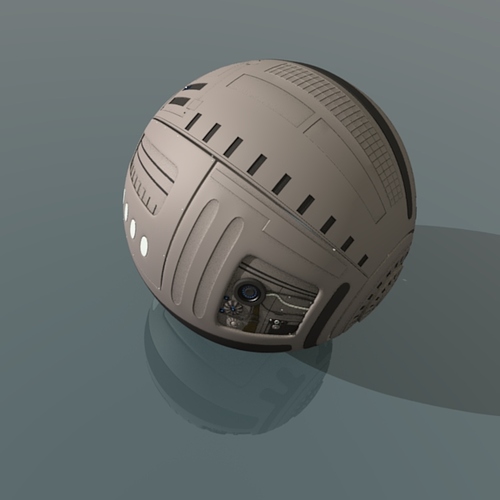 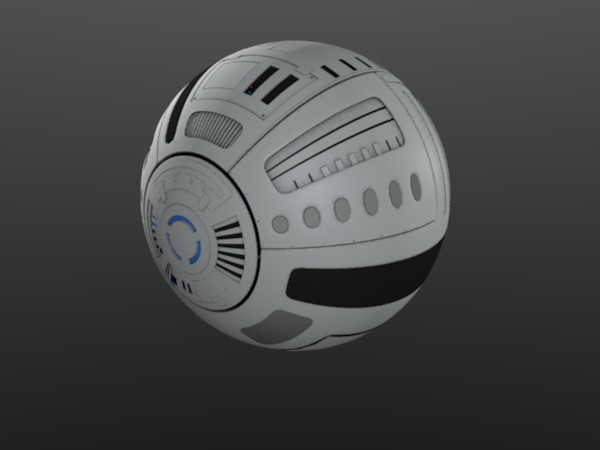 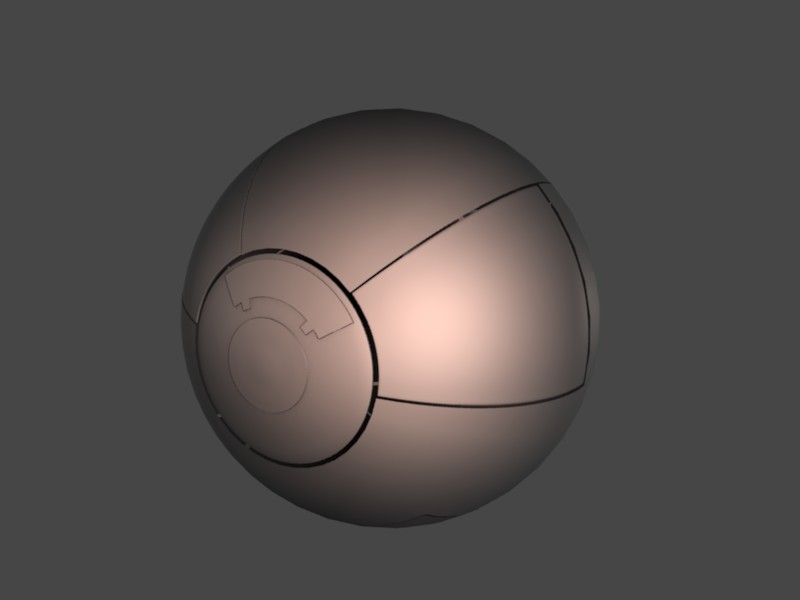 I guess it will have to open like this.I guess 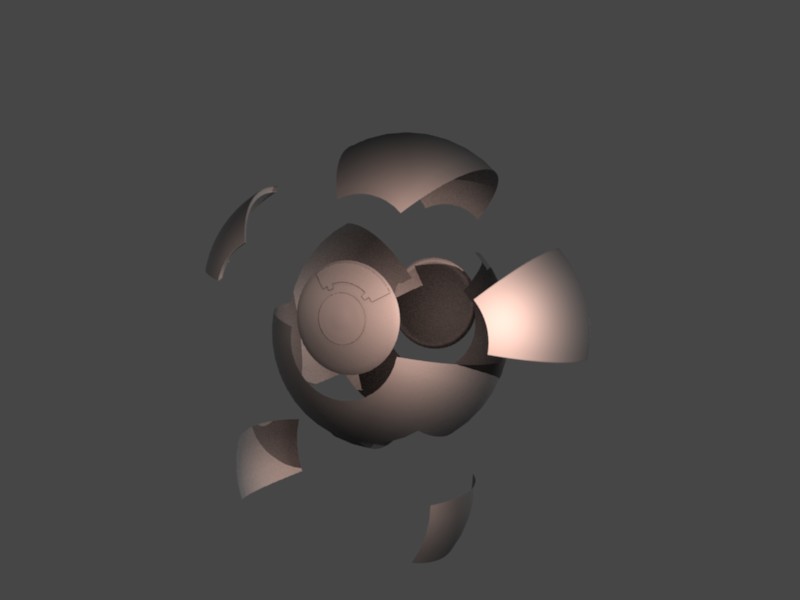 Hey, cool project. Looking forward to more progress the sphere looks just like it should

hello!
You could try to open these petal-looking parts to the back with a hinge…

I have a question for you all.
In my head I would rig the robot and make it close and open. How should I procede to achieve this setting? I mean, if I want to animate it, it’s very usefull to close and open arms easily. I cannot spend hours to make the open robot to look like a sphere again (after I opened it).
Did I explain my self clear?

Excellent looking mesh thus far. Can’t wait to see where you take this.

Looks cool. Some peaces of the metal (?) don’t have thickness. Perhaps even make the inside faces a different material.

I also wonder where this goed to. Think It’l be cool.

Nice idea, looking forward to seeing how this unfolds.

Will you be going for a humanoid or maybe more of an insectlike robot?

yes, I know the don’t have thikness. It’s because I stiil don’t know how it will be:D.
Nobody answered to my question…

I was wondering if it will look good as weel if I wil fix the metal panels to the shell with hinges. In that way I will override the problem…

it is just a try…

in this way I will hinge the panels to the main shell an it is more easy to rig the model. 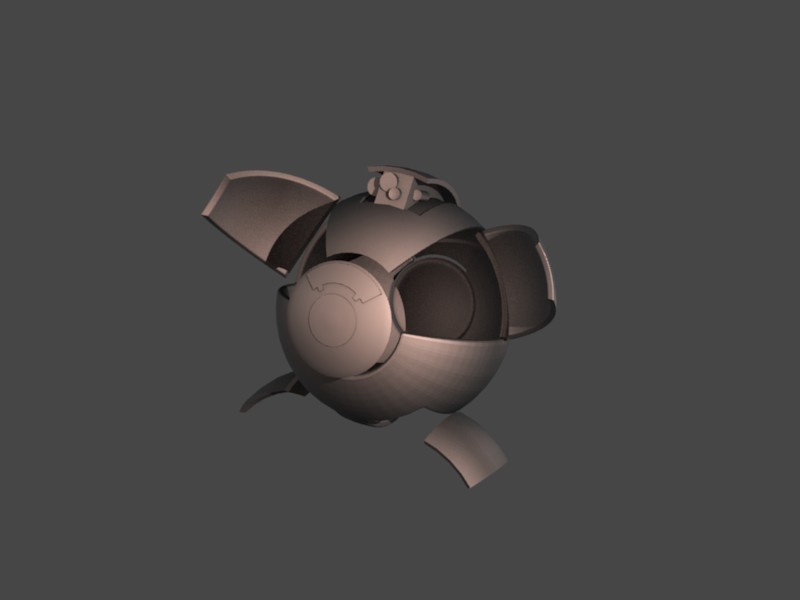 The hinge method is probably better for a flying-type thing. If you add arms/legs, having the panels come out as shin- and forearm-guards would be pretty cool. (See the silly 30-second Gimped image)

The design you have right now could even be considered almost ready, just needing the final details (pistons to open the panels? what’s inside of there? that sort of thing) 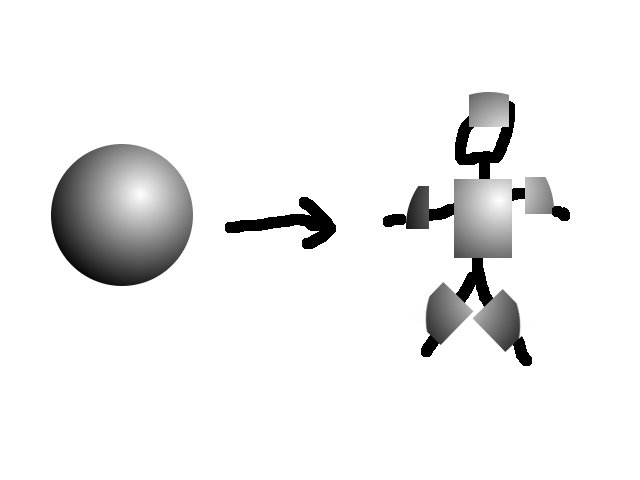 Hey, that IS a neat idea!

The sphere unrolling thing kind of reminds me of a droideka from Star Wars.

Hope the physical configuration gives you some ideas.

The design you have right now could even be considered almost ready, just needing the final details (pistons to open the panels? what’s inside of there? that sort of thing)

yep you are right, but if you look some post upper you’ll find a question? how to achieve this complex rigging? how to open and close the thing in a perfect sphere avoiding the panels to penetrate too much (sorry for my English) etc…?

I can make the pistons and other stufs with the panels opened, and then? how I will ever get back a perfect closed sphere? this guy here has to roll on surfaces…

it has to be spherical.
Any idea?

looks way cool to me, but cant really see a whole lot yet, I dont know how to get it to fold back up into a sphere, but i would just suggest maybe keframing it in one frame as a spheree and in another as posed, that way if you do get off you can goto the ball keyframe and see if everything is still looking spherical.

maybe keframing it in one frame as a spheree and in another as posed, that way if you do get off you can goto the ball keyframe and see if everything is still looking spherical.

thats could be a good idea. Thanks.
What do you guy think? I don’t want to update the modeling if I do not understand how to fix this matter.

i really woud say that the metal parts open to the back side of the robot - perhaps folding downwards after that. That might be the most easiest one.

When you want to achieve the other one, try this one:

Model it in a sphere, then animate the way it openns, and then try wheter you can ‘mirror’ the keyframes so that he folds into a sphere back again.

Hope you can understand me.

I think I get what you’ve been asking, now. Here’s the answer.

Burried somewhere in some menu (I don’t know where, exactly. Hopefully someone else does) There is a button. This button will copy the current pose, so that you can, say, have the first and last frames of your animation match each other. I’ll assume you know the basics of how to rig the thing, so I won’t get into that (I’m not really an expert, anyway). Anyway, first frame, just keyframe everything closed, make your animation, then you can copy the first frame, jump to the last one, and paste. add the last keyframe, and it’ll be fully closed.

Alternatively, you could probably do something with constraints, so you can animate the flaps with subtle details, and not accidently have them twist in silly ways. If you intend to do a real animation with the thing, I’d say that’s probably better. You should be able to make a constraint system so that each flap has a fixed range of rotation, and can only move along a certain axis. I haven’t really messed with constraints, though, so you’ll have to ask someone else about those.

thanks for the answeres, but the issue is another one:
the problem is when I model the thing also:D
to model the arms, for example, I need too put the opened plates away from the sphere (right?). Lets assume I can model the arms and parent all the meshes and rig everithing etc … ok?
ok! now I have to put everything iside the sphere and hope to be able to put them back like it were at the beginning. Is this possible? I think it is really hard.
While I was writing this post, I thought: If I make a copy of the panels just as reference for modelling …and I keep the original ones in the spherical position?
what do you think?

If you do the guts as a seperate model, you can pose the sphere safely, and model the guts around it. You can connect multiple models to the same skeleton, so what ends up happening is you have your skeleton which controls the flaps, some pistons, a re-directable jet, and/or whatever else you put on.

ok. I’m trying to get some rigging.
look at the movie, obviously it’s just a try.

at the end of the page