My goal is to make a very short ‘branding’ animation that I’ll use to promote my graphic design / 3d services. 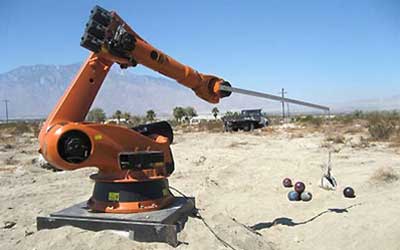 I’d ultimately like this puppy to have a more high-tech look, with tubes, wires and whatnot.
The idea is to have a high powered laser on the end and have the laser write out my name and logo. 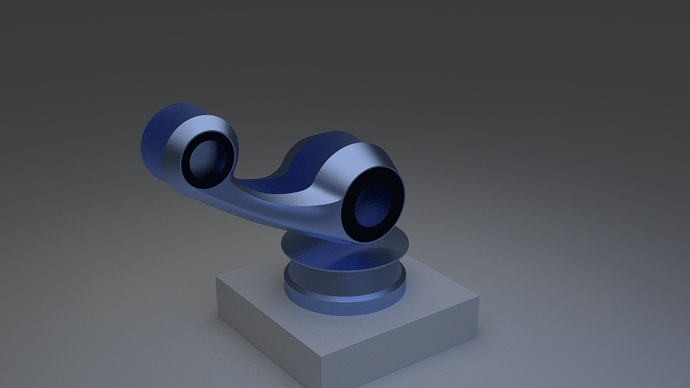 As you can see, still a long way to go, but I plan to update this thread as I continue.
I’d love any thoughts, criticisms, or suggestions!

that will look very cool when its done, what colour will you be having it though? i think for a high tech look glossy white with brushed aluminium/steel on all joints and hinges

that will look very cool when its done, what colour will you be having it though? i think for a high tech look glossy white with brushed aluminium/steel on all joints and hinges

Hmmm. That’s a good thought. I haven’t really considered the materials and look very much quite yet. I’ll certainly include a render or two along the lines of what you described though when I get to that stage. Thanks for the suggestion!

your welcome, thank you taking my suggestion into thought

cant wait for it to be done, how long have you estimated the modelling to take not including texturing?

your welcome, thank you taking my suggestion into thought

cant wait for it to be done, how long have you estimated the modelling to take not including texturing?

No problem! Thanks for the suggestion.
After playing with the shiny white, I really like it. I think I still like the dull black look of the joints though, but I’ll focus more on texturing later.

I did a bit more modeling.
Added the second arm and detailed the joints a bit more.
Here’s a video ‘turntable’ animation.

Still a lot of work to go. Next I’m going to start modeling the head, which will contain the large, powerful laser.

wow, that is really starting to look good, your right, the gloss white and matt black go very well with each other, how are you going to do the base? hanging upside down on a ceiling in some millitary building guarding a vault? just an idea… i think i watch too many sci fi films

I closed up the head and decided to turn it around so that the head doesn’t flip upside down as it points. It’s taking on sort of a ‘swanlike’ shape, and I’m thinking about going with it. Next I’m going to model some of the details of the laser mechanism, the hinges, and the base. 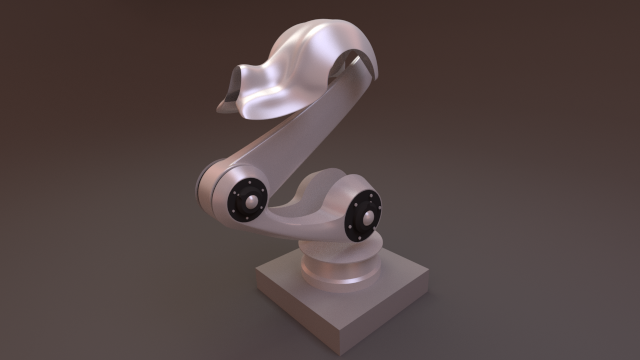 Looks really cool, not sure why but it reminds me of something from I Robot

reminds me a bit of portal

that´s a really neat animation! i like the robot arm and its “unfolding”. many years ago, i played the pc rts game “empire earth” from stainless steel studios. in the intro, there was an animation where laser guns write the studio´s name into a metal plate. nice gaming memories.

Lookin’ good there Sam, Interested in seeing the finished model for sure ;). Keep working on it!

I modeled more of the head, and adjusted the rig slightly.
I began creating an environment.

I haven’t figured out how to make the ‘SCG’ logo that gets carved in the hill appear dynamically yet. I’m guessing that I’ll need to use dynamic paint in order to achieve this.

Rendered in cycles using only 150 cycles/frame. I’ll do the final version in much higher quality.

Thoughts, criticisms, and comments are welcome!

Perhaps dynamic paint…somehow…idk what im tlking about :)…btw how did do the laser and particle thing you have now?

Perhaps dynamic paint…somehow…idk what im tlking about :)…btw how did do the laser and particle thing you have now?

For the laser and particle thing, I have a bezier curve that traces out the letters on the hill. A small plane is following the curve as a path. The plane has 3 different particle systems applied to it, one for each letter. On the frames that the plane is overlapping the letters, I allow that respective particle system to emit its particles there only. I have a thin cylinder parented to the robot’s head and tracking the plane that is following the path. On the same frames that the particles turn on, the cylinder’s material is changing from fully transparent to a mix between transparent and emission.

Now, once I have a little time to work on it, I’m going to learn how to make the letters appear in sync with all of this. Any suggestions? I’m still thinking the most efficient way will be dynamic paint, although I’m not opposed to using an image sequence in my texture for the displacement modifier.

Thanks for tracking this thread!

I got my logo to dynamically write in the hill!

It actually took some python scripting to make this work.
More on this later.

Thought you might wanna check this out. I believe the guy who wrote dynamic paints code made this video.

Edit: attempting to embed video… sorry this is my first post to this forum… Video embed failed.

Thought you might wanna check this out. I believe the guy who wrote dynamic paints code made this video.

Cool, thanks for that, a very cool example of dynamic paint.

I actually think that what I was trying to achieve is slightly different than this video. I could be wrong, but it looks to me like the laser in that video is just discoloring the ground, not displacing it.

I wanted to actually “carve out” the logo using a displacement modifier.

I finally decided to abandon dynamic paint and resort to using an image sequence as the texture for my displacement modifier, but that didn’t work either.

It seems like when you kick off an animation, it only uses the image at the current frame in the image sequence for the displacement modifier. If I jumped to any frame and F12 rendered it, it looked fine. Seems like a bug to me. To get around it, I wrote a simple python script that just rendered each frame (as if it were an F12 render) and saved the result. This worked and it gave the result that I wanted!

Made a lot of updates to the environment texturing/ lighting/ particles. I also did some more detailed animation of the camera, depth of field, and the robot itself. Let me know what you think! I think this is getting close to being finished, although there’s a lot more that could be done.

One thing that bugs me is the depth of field in the beginning makes the robot too blurry (need to adjust this). Also the sky texture seems to be following my camera, rather than ‘staying put’ in the sky. So those are two things I recognize that need to be fixed for sure. What else can I do to improve this animation?