Had an idea that I have been kicking around for a while. When i was a kid I always wanted a secret dungeon with a rocket to fly around my neighbourhood. Sadly I never got it excavated in time before leaving home…

Anyway, now I’ve grown up I realized that I could try again. :eyebrowlift2:

After a couple days modelling my retro style rocket and WW2 type bunker, I’ve got a test render.

Now I have to talk my son into using his bedroom as a launch facility! 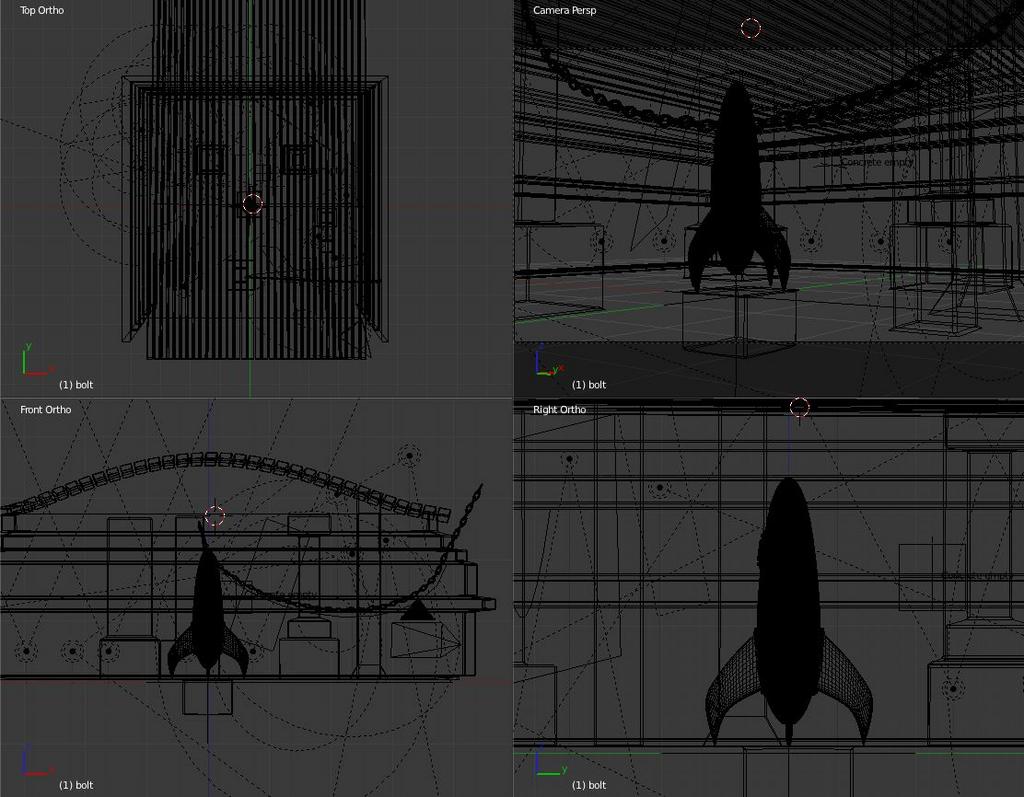 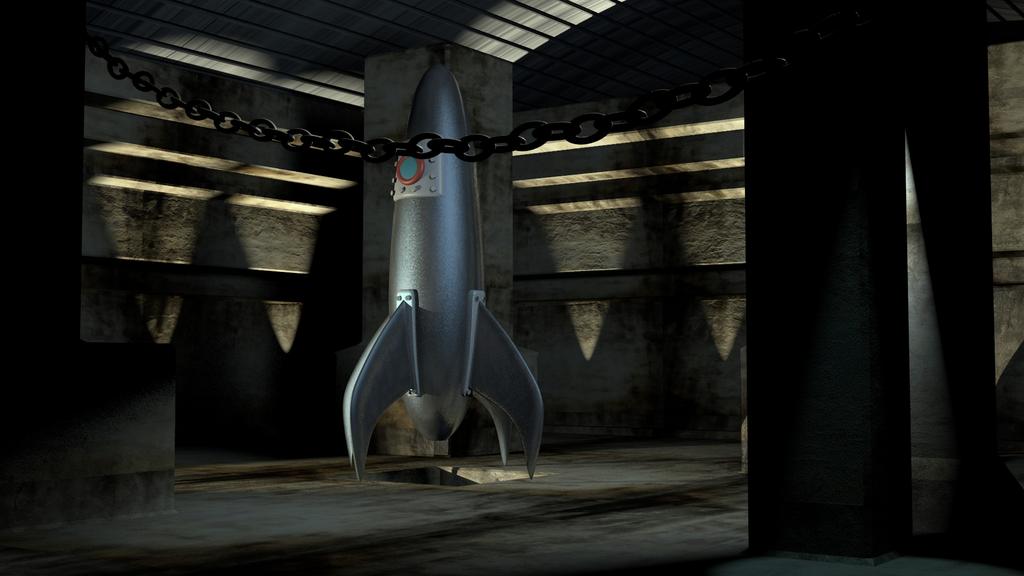 Another render, this time without the AO (takes sooooo long) but with pretty DOF Bokeh.

The second is a nice overhead. 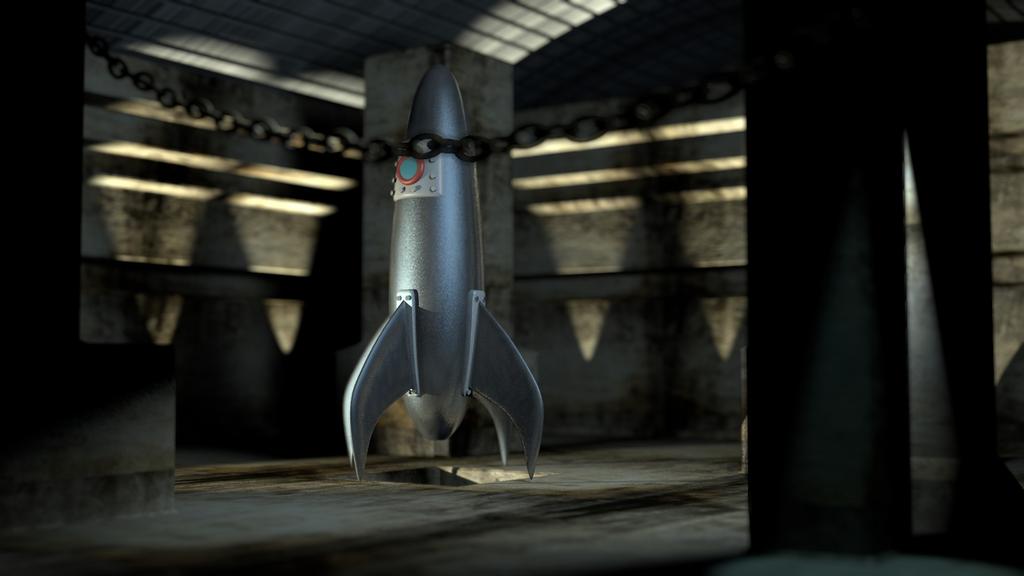 I guess it needs gantry’s and warning signs, pipes and fixtures… any suggestions?

I want to avoid barrels, as they would imply waste disposal… but spare parts is an excellent idea. I want to have a retro feel so computers may look out of place. Perhaps radar screens and portal viewers etc. 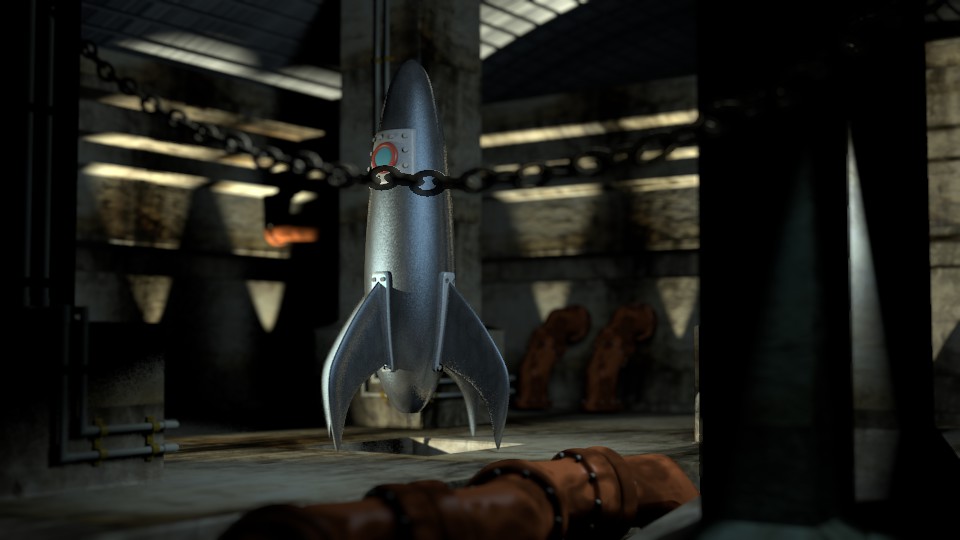 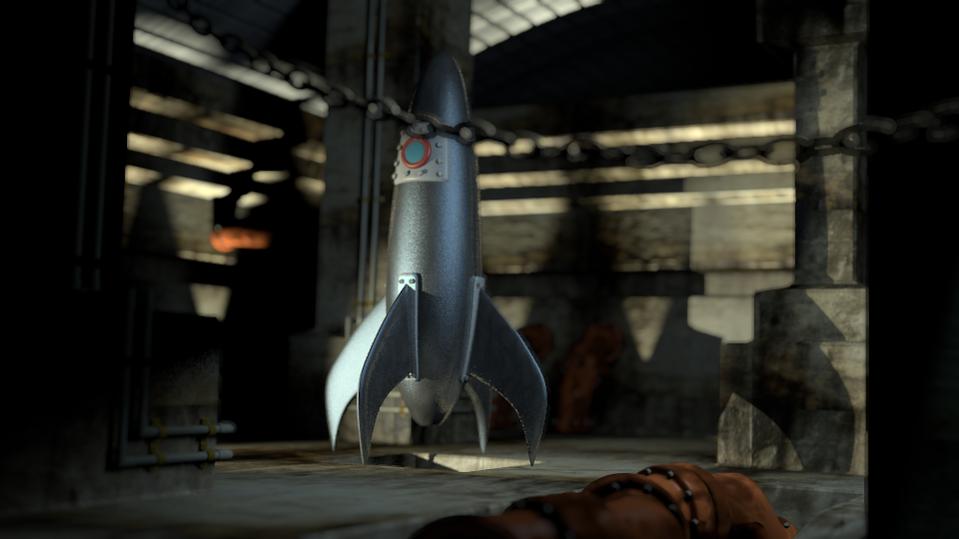 Ok, now I’ve spent time smacking myself in the head (rendering away the night) I learned to instance! Group>instance>duplicate instance, many times! Memory allocation for render dropped from 1.2 gb to 250 mb, ha, hahahahaha…

and render time fell from 35mins per frame to 1.5mins. I also optimized some subsurfs on the pipes, as I had it dialed up to high.

Issue 1:
I spent some time adding another camera with a short dolly move in the same scene. Both have DOF blur from they’re respective cameras (one close the other far).
Using another scene I added the VSE, I placed the composited scene (as a strip) and switched between the cameras (using Strip property: Over ride camera change).
But the compositor doesn’t switch Zdepth with the camera change. It only uses the active camera from the scene. whereas the VSE substitutes the active camera for this over ride effect.

Perhaps I should separate the cameras onto their own layers and force Zdepth from each, but I don’t want to render each camera when it isn’t needed… thats why the camera changer in the VSE is so handy. hmmm.

Issue 2:
When I turn on ray trace the DOF blur suffers. It looks good without raytrace but the Zdepth seems to get screwed up when it’s active.

Issue 3:
I tried placing the cameras in their own scene too and linking them into the set, so I could swap out sets if I wanted to. But they always shoot the scene that they are in (not the one they link to). I guess I should have used their rotation location properties on another set of cameras instead.

It is looking good so far, and I like the old school feel you have going. Maybe you can hang a rusted caution sign off that chain in our front view, and maybe a few crates that look beat up, like they had all the parts for the rocket.

I was riding the train to work and noticed some excellent “tortured safety stripes”. I thought I need some of those. I made them in GIMP and added them as decals to the hangar walls. This was not as easy as I remember. The floor ones went on ok, but the wrapped ones (around the columns) did all sorts of weird things, notably they didn’t clip correctly when you changed the mapping type.

Heres a sphere mapped version. Stupid but really cool looking, I had to save it! 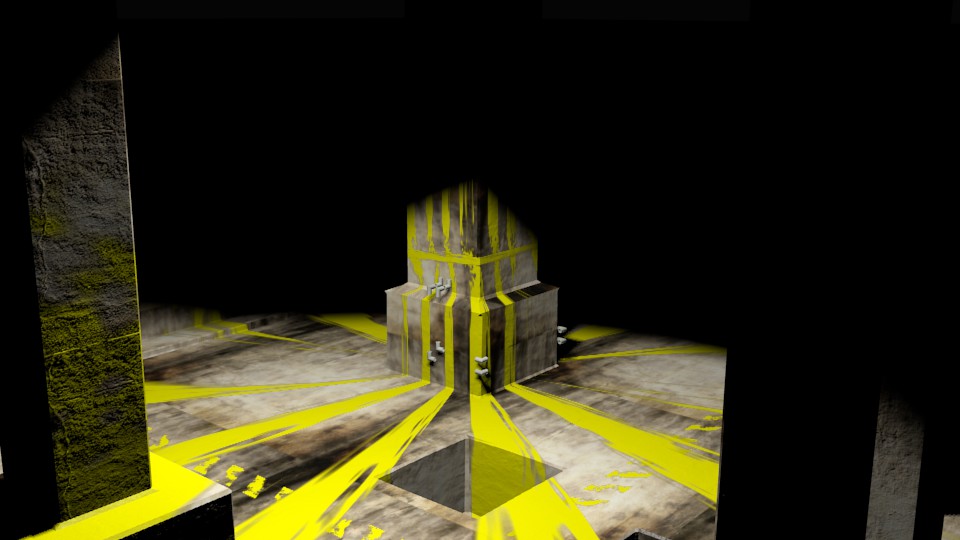 And here is the striped version I was really after… 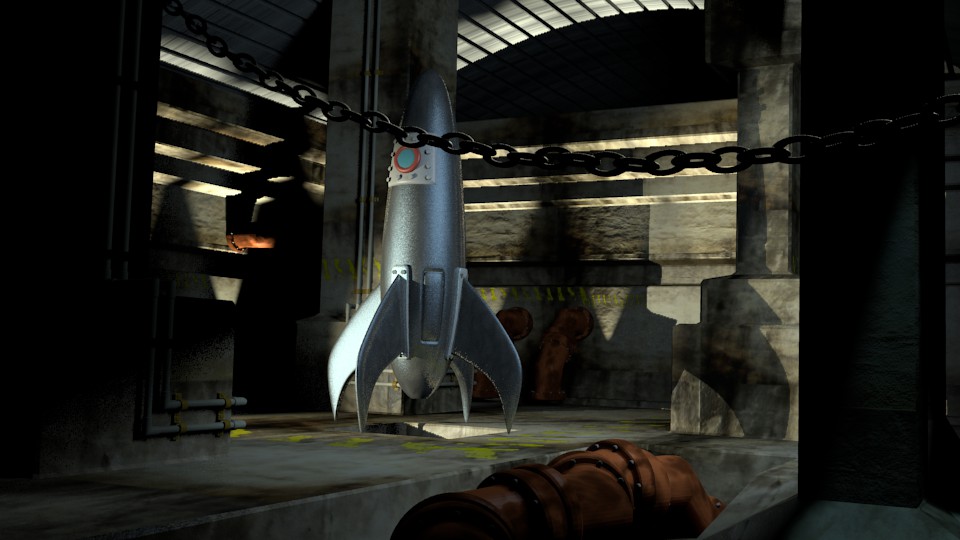 Oh and I added a door. Now it’s a vehicle instead of a missile!

I love it.
They wouldn’t have to be new computers. Could be reel to reel or punch card and maybe some vacuum tubes sticking out, something like you would see in Fallout. Ominous banks of anonymous flashing lights that have absolutely no function are a common theme in secret layers and hidden bases.

Only two crits are the big pipe on the floor closest to the camera looks like its shaded flat, and the window on the rocket seems a little too blue.

Tell your son he can push the big red launch button and you shouldn’t have any trouble:).

Yeah I wanted the rocket to keep a toy feel, sort of plasticky. That vacuum tube idea is great thanks. I’m thinking of making his bedroom a control room like the Thunderbirds. the pipe does have some reflect but it was supposed to be rusty. Hmmm I will think about that one some more.

I apologize I should have been more specific. I like your rusty texture just I meant that it looks like shading in object tools is set to flat instead of smooth in the last render. It looks like you can see the edges of the polygons.

Actually that’s right as there is an issue with some faces making weird tris when smooth is on. Also it’s quite low poly now and I worry about moving past it and watching the geometry shift.

Here’s another test render, which took a while. I realized that the compositor wouldn’t reset the z-depth from a camera change in the VSE (fair enough as it is a downstream event). But even with duplicated scenes (with just a single different camera in each pushing out separate z-depth) info I was crashing the renders. So no more DOF for the time being.

the issue now is with the strange reflection artifacts on the rocket. Where ever there is a good concrete reflection I get a strong flicker. I rendered at anti-aliasing at FULL, but I also see some flicker on the floor in the high shot.

I don’t know why it is doing this, maybe I have to do something to the original texture. It looks fine everywhere else.

Also you may notice at the end of the sideways dolly shot a strange shadow on the far left. It seems to made from static black dots. It is cast from an area light, should I increase the sample rate of that lamp?

Sadly youtube has killed the effect (of flicker) during compression. I guess I can put it up at Vimeo instead?

Jwastson, thank you for your advice, I split the object into multiple face/vert-groups and assigned a similar texture to each with the various stripes turned on/off as required.

But I still have this flickering reflection issue. I have placed a camera right up close to the rocket fuselage to examine the dimpled surface and cant see any differences between frames…

Are you using a procedural noise texture? I have found that this causes a flicker in animation, so i usually use an image render of the noise instead.

Yes it is a procedural, I didn’t realize that there would be that sort of problem. How could I bake it in?

Instead of a noise texture, I use the cloud texture with the size value set to zero, and then change the contrast to something like 5 and lower the brightness (between 0 and 0.4). I find this gives you a bit more control over the noise, and the result is indistinguishable.

Well, baking involves UV image mapping, but I have in the past just rendered a plane shadeless with a texture, then used it on a texture slot mapped to generated.