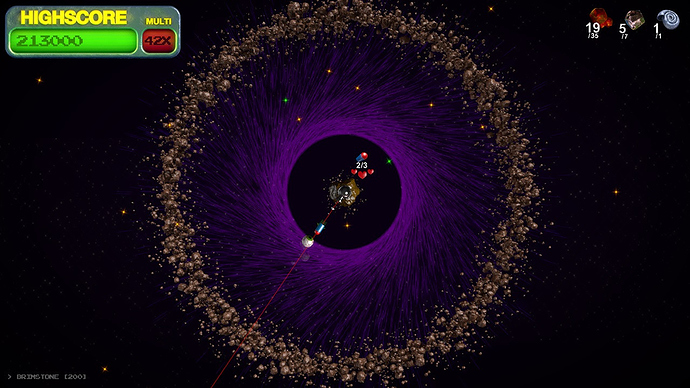 [the name is work in progress]

SCREENSHOT from the game = http://imgur.com/CyOjPzs

The game’s largely finished and in a playable state, it requires some finetuning here and there though.
Currently the highscore will not be saved on exit (haven’t looked into it yet) and there’s no main menu (so the main-game starts as soon as you press “P”).

Things that are still to-do:

…- if you can think of something to improve/add, I’d love to hear it.

…- again, if you notice any issues, be kind and let me know

Here are the controls in case you want to play the game (…which I’d encourage you to do :P):

You can have 3 rockets on-screen at a time. Your goal is to shoot the glaring items that fly over the screen and collect points. Shooting those items without missing increases the multiplier (up to a maximum of 100x). Missing a shot awards you -500 points. Getting hit by the eyeballs 4 times will make you lose the game (SPACEBAR to restart).

Thanks for your time,

pressing some special button fires a small shuttle instead of a projectile.
the shuttle is a spaceship that continuosly fires in front of itself
the shuttle can be controlled with A-D, it has a timed life, and it is a limited resource.

Thanks pgi, the shuttle (or something with a similar functionality) is a very nice idea, I’ll see what I can do in regard to its implementation.

Edit: I’ve created a little space shuttle, so far without any functionality.

Edit2: The shuttle now works but is entirely overpowered. An update version can be downloaded above.